Once connected to the news each morning (unlike certain New Yorkers last week), I try not to succumb to lists (“Five Things the Government Can Do to Lower Airline Ticket Prices;” “3 Easy Ways to Use Clickers and Peer Instruction in the Arts and Humanities”—both of these pretty instructive, BTW) or rants. For one thing they remind me of what is, increasingly, the hardest part of teaching the young to write: understanding the difference between a proper think piece and the models they've absorbed from radio, cable, and self-selected news feeds. For another, it disturbs morning coffee.

But it was hard to ignore "Why I Hate Museums" by the CNN travel writer James Durston. I disliked them too, once, more naturally drawn to the excitement of the concert hall; then acquired the taste and technique from years of living in and around Paris, where museology reigns supreme—and a tolerable concert hall is so far nonexistent. Durston has a point about vases and pots. Also the fatigue (as pictured) and, too often, the crowding. As to the little tags (referencing the superb traveling exhibition from the Orsay), I won't read beyond any sentence that has the words Fauvism, post-Impressionism, pointilism, and cubism in one sentence.

But there are infinitely more reasons for the historically minded to admire the museum model than to denigrate it, several of them noted in the response by Ford W. Bell. When Joseph Kerman retired nearly two decades ago(!), we hosted an afternoon symposium at UC-Davis on what he liked to call Criticism, and during the Q&A I asked him what he was looking forward to most about retiring. “Not going to concerts,” he pronounced categorically. Aghast, we disciples listened as he went on about his growing distaste for sitting upright in tidy rows and worshiping at the altar of, as they were by then widely known, dead white European men. The alternative model he proposed was the vibrancy of the museum experience, “where you can touch and feel, use the computer, stretch out,” he said.

In the end museums are not so much about tourism, of course, as about one's personal connection with the past. Once the past and its artifacts are in your veins, there's a real thrill to coming around the corner to see Vermeer's "Girl with the Pearl Earring" or Gaugin's ladies on the beach—in the flesh as it were. It's a feeling I associate with hearing the Brandenburgs on old instruments or (yes) the Bayreuth Experience. 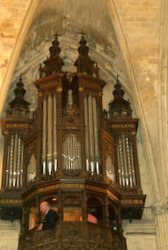 I was thinking along these lines, anyway, during a week marked by such connections. One was an organ recital by the distinguished English organist-choirmaster Martin Neary at Notre-Dame-des-Marais of La Ferté-Bernard, in the Sarthe region, France. It was not just that the historic instrument comes from 1532 (restored 1986): here, in a tiny loft suspended between two columns, the smallish artist scarcely managed to wedge himself—acknowledging applause like a gargoyle come to life. But in introducing the Purcell rondeau on the program, Neary noted in passing that the composer had been his predecessor (from 1669) at Westminster Abbey. A proper frisson passed through the assembly—for me a flood of thoughts and associations altogether similar to those encounters with Vermeer and Gaugin.

For Kenneth Levy (1927–2013), whom we lost last week after a long illness, 1532 was relatively modern. A generation of Princeton musicologists learned their medieval and Renaissance notation from him, and I went on from one of his seminars to enjoy a lifelong scholarly interest in Edmond de Coussemaker and a literary/musical affection for the work of the trouvères and troubadours. Not so secretly, Ken was also a fan of Bellini (and curious about Steibelt), which is what led him to conclude that he just might be interested in a dissertation on Berlioz. Adieu, bon père.

D. Kern Holoman, professor emeritus at the University of California, Davis, is curator of Musicology Now.