This week Mark Oppenheimer of the New Republic wrote a provocative essay called “Stop Forcing Your Kids to Learn a Musical Instrument” that asks why we, by which I think he means affluent, educated, and usually white parents, make our kids study classical violin, piano, and ballet. He meant to say making your kids play musical instruments as part of “some upper middle-class acculturation plan” is a problem. The article, I admit, made me, and as far as I can tell many others who play or teach classical music, mad. But he asks good questions. Why should these kids learn violin and not guitar, which they can learn quickly and sing at a campfire? How many people who studied the violin or piano as a child still play? And why do "we"—the affluent, mostly white bourgeoisie—cling to a tradition with roots in nineteenth-century European parlors? 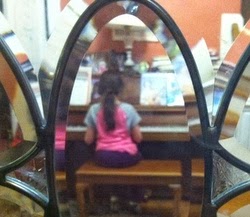 That kids who learn instruments may not continue to play them is not unique. Many things people do as kids they do not do in their adult lives: long division, experiments with Bunsen burners, sentence diagramming. Sports don’t last either. When middle-aged people reclaim their team sport prowess in soccer, football, or basketball, they often end up injured and facing surgeries or time- consuming, expensive PT. But none of this really matters. The point is not, as Oppenheimer says, that music or ballet gives you lifelong skills. The point is not that those who play music will enjoy listening to it more and thus help prevent the seemingly imminent death of classical music audiences. (I mean that literally. Those audiences are old.) 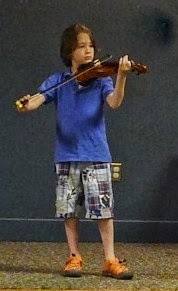 Oppenheimer reminds us that kids can learn to make musics other than classical music. But other kinds of music take hard work, too. The campfire guitar thing notwithstanding, good guitar players practice as hard and with as much orthodoxy as any violin player. Virtuosic guitar solos quote Vivaldi, Paganini, and even Kreutzer etudes. And the point is not, as Paul Berman says in an articulate response, that classical music sounds  somehow bigger and more sublime than other kinds of music. For him, the Mendelssohn violin concerto stands as “one of those nineteenth-century violin pieces that manages to express a combination of the plaintive, the grand, and the mathematical. If you are listening to the performance of the Mendelssohn in the right spirit or God knows if you are yourself a performer, you will find yourself in the presence of a majestic something or other that is beyond all something or others. … Feelings of triumph will swell in your heart.” To me that concerto brings back bad memories of listening to young violinists saw away at that tune. Some classical tunes do feel sublime to me, and I know the feeling he articulates. For me it’s the Brahms Requiem. But that’s me—a forty-something viola player. It’s not universal. My jazz colleagues would argue that jazz comes with the kind of sublime potential that Berman hears in classical music. Jazz, a music that comes not from the nineteenth-century parlor but from African American traditions, requires intense technical and theoretical chops that remain elusive to many of the world’s best classical musicians. Hip hop, often held up as the most relevant to the most diverse group of kids, takes immense skill. Kids who learn to do that well need as much discipline and training as a good cello player.

But none of this is the point either. And whether or not Oppenheimer and I make our kids take violin lessons is also not the point. In the interest of full disclosure, I do make all three of my kids take music lessons. The real question is why more kids don't have access to violin lessons, to ballet, to hip hop, and to guitar—all of which have the potential to lead to a life-long creative practice. These endeavors do much more than build self-confidence and perseverance. Engagement with the arts transforms the ways in which students experience their environments. Exposure and experience with the arts gives kids a chance to develop their own creative impulses. Furthermore, the arts facilitate the development of impulse control, problem solving, executive functioning, and resiliency.

Sure, it’s wrong to assume that classical music speaks to every child, and it’s ridiculous at some level to assume that all middle-class kids need to play an instrument. But it’s also wrong to assume that since classical music doesn’t speak to some kinds of children, they shouldn’t get the opportunity to do it. Educational studies demonstrate correlations between arts activity among under-resourced youth and subsequent levels of academic performance and civic engagement. The achievement gap is a well-known problem, but there also exists a very real artistic gap, which does just as much damage. As the cultural gap widens between children living in poverty and affluent kids, those growing up in poverty feel progressively more alienated, first from their public schools and later from their universities.

The responses to Oppenheimer's article (and his heartfelt reply) suggest that this issue touches a chord. We all write from our own experience and passions. I am a classical musician and a music professor at the University of Virginia, a hold-out for bourgeois education; huge numbers of our students participate in fine arts. My children all begged for music lessons, but some weeks I have to make them do it, just as some nights I have to make them brush their teeth. Often they’d rather play outside, fight with each other, or even, dare I admit it?, play computer games. But some days they love it. I don’t care if they play their instruments in twenty years, but I do care that they have the option. I also run an arts community engagement program that pairs U. Va. students with children from under-resourced communities. The kids mostly come from African American families in which they will be the first to attend college. Mostly they have not been to live arts events of any kind outside of school.

Our two best events last year were a step show and a classical chamber music festival featuring a movement of the Brahms Serenade. One of my favorite moments in this program involved a ten-year-old fourth-grader who comes from a very tough situation asking the professional flautist, “Hey, have you ever heard of The Magic Flute?” He did this in a hall where fifty years ago African Americans would not have been able to sit and listen. I have no idea and do not care all that much whether he or any of the other kids we work with will play musical instruments, pursue fine arts, join a step team, perform spoken work, or any other kind of art. But they need to have that option. I certainly hope that they do something creative, and I certainly hope that they feel comfortable in a variety of artistic environments. The fact that they don’t reminds me that whether or not I make my kids come in from outside to play classical music instruments constitutes a kind of first-world problem that I am very lucky to have.

Bonnie Gordon is Associate Professor of Music and Director of Graduate Studies in Music at the University of Virginia.