NOTE: 2014 marks the Gluck tercentenary and the bicentenary of The Star-Spangled Banner. We treat the latter in a forthcoming post. 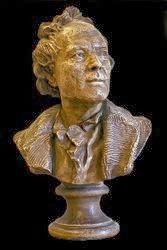 In November 2013, I received a very nice letter from a student at the Staatliche Realschule in Berching, a town in the Upper Palatinate region of Bavaria, asking me to summarize my research on Gluck for a booklet celebrating the 300th anniversary of his birth on 2 July 1714. Erasbach, the village of his birth, is now a district of Berching. Berching’s website lists a number of Gluck-related events for the tercentenary celebration: visitors can see a multimedia presentation at the Gluck Museum and, similar to the Goethewanderweg in Thuringia, can walk a 6.5 km (two-hour) Gluck-Wanderweg past the Geburtshaus and baptismal church. It seems quite a production for a composer who lived there for only the first three years of his life. (The nearby village of Weidenwang, likewise a district of Berching, long claimed Gluck as its native son also: both places have a monument and a Geburtshaus.)

But was Gluck Bavarian or Bohemian?

The confusion over his birthplace and national identity, as Daniel Heartz points out, comes from the fact that the Upper Palatinate originally belonged to Bohemia and was only awarded to Bavaria after the War of the Spanish Succession in 1714, the year Gluck was born.<1> (His baptism was recorded in the shared parish register for Weidenwang and Erasbach.)<2> To add to the confusion, when Gluck married Maria Anna Bergin in 1750, the marriage certificate indicates the nearby town of Neumarkt as his birthplace.<3> The family moved to Reichstadt (now Liberec) in Bohemia when the composer was three, later relocating to several other villages in the region; finally his father, Alexander Johannes Gluck, moved the family to Eisenberg (Jezeří) to become the head forester for Prince Philipp Hyazinth von Lobkowitz. In their recent biography, Gerhard and Renate Croll note how the young Gluck was surrounded by Germans—his mother was definitely a German and his father was in daily contact with Germans and had to use German for official purposes—and the composer’s German letters have peculiarities of the Upper Palatinate dialect.<4> Yet his student Salieri said that Gluck spoke Czech.<5>

Gluck’s first biographer, Johann August Schmidt, noted Bavaria's claim <6>: in addition to the two monuments in Berching, there is also one in Munich (where he never spent much time).<7> On 15 October 1848, right in the middle of the revolution, Munich paused to unveil the statue and honor a composer whose works had revolutionized opera. Joseph Hartmann Stunz, the local Kapellmeister, composed a Festgesang celebrating the “German tone poet Gluck”:

Hail the dearest fatherland,
Which in an age long since past
As a pledge to its ancient powers
Gave rise to men of immortality!
Men, whom a god protected
Against saucy, degenerate art
With the holy flaming sword
Of the artist’s burning love:
Hail to him! who with strict rule
Strove for the highest truth,
To form the soul into being
Through iron song!
As Orpheus brought
His wife back to life from the night of Orcus,
The master, with faithful striving,
Has brought art home to us.
And in the kingdom of eternal beauty
He came triumphantly, with the heroic Grecian sons,
[He] drinks the German nectar of the gods;
For art firmly weaves around the races a holy band,
And the furthermost gladiators for truth
Offer each other a brotherly hand. 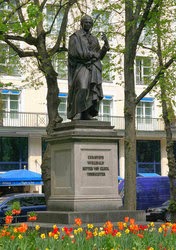 This was performed by a male choir accompanied by a full wind ensemble with ophicleide, bass trumpet, and tuba.<9> (The statue initially stood at the Odeonsplatz but now resides in the Promenadeplatz next to the statue of the Franco-Flemish composer Orlando di Lasso.)

The monuments in Bavaria and the Berching Gluckjahr festival bring to mind the ease with which later writers manipulated the composer’s biography to meet personal aesthetic, nationalistic, and political agendas. In the nineteenth century, Gluck’s identity was always changing: at one moment a dogmatic German fighting against the excesses of Italian and French opera; at another, a child of Nature, absorbing music from his Bohemian homeland.

For some, Gluck’s childhood evoked a Romantic, nostalgic image of a callow youth venturing through the untamed Bohemian countryside. The German painter Johann Christian von Mannlich, who shared lodgings with Gluck in Paris, recounted his anecdote of a back-road journey through Bohemia to Vienna:


Wanting to husband the little wealth I had, I approached a rustic cottage where the family were sitting down to eat. I took my Jew’s harp from my pocket and treated them to a few tunes. Seeing that I was decently dressed, they bade me enter and made room for me at their table. When night fell, I found myself in another village, where my Jew’s harp earned me eggs, bread, and cheese, which were given me at the windows of houses where I made myself heard.<10>

This account, certainly embellished by Mannlich, casts Bohemia as a rustic place of wandering artists and welcoming peasant homes.<11> In his Künstlernovelle Gluck in Paris (1836), Johann Peter Burmeister-Lyser has the old Gluck fondly tell young Méhul of finding his passion for music:


When a boy, in my home, in lovely Bohemia, I heard her voice, as a divine voice, in all that surrounded me—in the dense forest, in the gloomy ravine, the romantic valley—on the bold, stark cliff—in the cheerful hunter’s call, or the hoarse song of stream and torrent, her voice thrilled to my heart, like a sweet and glorious prophecy. All was clear to my youthful vision.<12>

A. B. Marx mirrored these sentiments: “The youth could not think of Weidenwang or Neuschloss [two residences of Gluck’s childhood] as his home—it was the forest, the forest with its dreamy shadows and fantastic, flashing streaks of light.”<13> For Marx, these “sounds of nature” (Naturklänge) later manifested themselves in Orfeo and its successors.<14>

While Gluck the Bohemian indulged in flights of fancy into the Bohemian wilderness, Gluck the German fought tirelessly to upend Italian and French traditions. Watching rehearsals of Iphigénie en Aulide, Mannlich supposed “Gluck was also at war with the orchestra and the singers, who in his opinion, knew neither how to sing, nor to declaim, nor how to get the best out of their instruments. Their French vanity was sorely wounded to be taught all these things by a Teutonic master.”<15> In an 1806 review of Gluck’s Iphigénie en Tauride and Armide, Johann Friedrich Reichardt described the supposed Piccinni-Gluck querelle as a battle between “the enjoyable Italian comedian [Comiker]” and “the tremendously huge German tragic poet [Tragiker].”<16> Though Gluck composed only a few German Lieder and his operas were in French or Italian, opera houses in the major German cities usually gave the operas in translation—a practice that led critics and audiences to perceive his works as relevant to the creation of a unified German opera in the nineteenth century.<17> In a review of the 1808 premiere of Orpheus und Eurydice at the Berlin Nationaltheater, for example, the critic for the Vossische Zeitung praised the opera as a monument to German art:


It does the directors the highest honor that they have erected for us these monuments of German art, which the German Orpheus, Gluck, created so powerfully and truly for us with the irresistible magic of his song, so that they will remain the admiration of posterity, with regard to drama, and the enjoyment of which we had been so long without on our stage—with the splendor and honor, which we owe to the memory of this great German artist.<18>

In the end it did not matter where the composer was born and where he grew up—nor even what language he may have first spoken. His nationality was most often derived by agenda. If you visit Berching to celebrate Gluck’s 300th birthday, then, you might want to think less about Germany, or Bavaria, Bohemia, and more about E. T. A. Hoffmann's evocation in his novella Ritter Gluck (1809): of Gluck as a wandering spirit whose sense of revolution transcended national borders.

Eric Schneeman earned the Ph.D. in 2013 from the University of Southern California for a dissertation entitled The German Reception of Christoph Willibald Ritter von Gluck in the Early 19th Century. His entry on Gluck appears in the Cambridge Wagner Encyclopedia (2013)
.