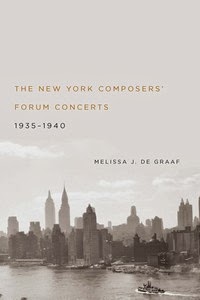 A storyteller at heart, I am fascinated by the stories history has to tell—particularly the period encompassing the New Deal. When I first discovered the transcripts of the Composers’ Forum in the bowels of the National Archives II, it took only moments for my interest to be piqued. Here were stories! Untold stories! I dove into the transcripts and emerged, my head reeling with discoveries. From there I embarked on my project, the telling of the little known history of the Composers’ Forum. I was overwhelmed by the diversity of composers and musical styles represented, and I particularly wanted to talk about the composers who have since been forgotten. Following the most prominent and vigorous threads of dialogue, I delved into a vast array of composers, transcripts, and topics, in search of the political and artistic trends that affected the composers, their music, and the responses to their music.

Transcripts of the discussions contain a trove of information about composers’ and listeners’ attitudes toward modernism, politics, gender, race, and American identity. “Modern” music in the 1930s comprised far more diverse styles, composers, and works than we imagine today. The diversity of aesthetics and thought make the Composers’ Forum unique among contemporaneous institutions. As in any period, many now-“lost” composers made important contributions. I have selected eight gems to share, in the hope that they will lure you into the greater story of the Composers’ Forum…

1. A listener at Howard Hanson, commenting on jazz, declared to the assembly, “Down with sophisticated snobbism, down with commercialized jazz!” (Composers’ Forum transcript, March 17, 1937)

2. Donald Tweedy spoke on his use of folk music, cautioning that it was not enough to study a certain body of music: “I don’t think you can go to a library and get a book on folk music and turn over the pages and come to one you like. I should say if your mother sang them to you when you were a baby, you have a much better chance than if you look them up in the library.” He had studied English folk music extensively, but moreover, was an active participant in it: “I have not only studied it but lived it and even danced it to a certain extent. In spite of my tremendous weight and size (laughter), I like to do English folk dancing and that is possibly the reason it is discernible in my music. In fact, I advise you all to do lots of dancing. It’s lots of fun.” (Composers’ Forum transcript, November 11, 1936)

3. Roy Harris articulated the unique qualities that set the American composer apart from his European contemporary: “We have a different speed of doing things, we have a different tempo of living. Our great fertile plains reaching westward, our great factories, the turmoil of our great cities, the vastness of it all is American, American to the core, and out of it should come a very great virile music…” (Excerpt from an address, October 30, 1935)

4. At Johanna Beyer’s first concert, nearly every comment leveled at her was a criticism against her modernist tendencies. Her music was described as chaotic and weird, containing “pathological sounds and noises.” The final question brought gender tensions to the surface: “Miss Beyer, you seem to have gone your male preceptors one better in search for strange and ineffective tonal combinations. Have you consciously adopted Rudyard Kipling’s statement, ‘The female of the species is deadlier than the male’ as a guiding principle in your composition?’” (Composers’ Forum transcript, May 20, 1936)

5. No less barbed, a listener suggested that Jessie Baetz’s compositions for Violin and Piano “could very well do without the Piano and might do without the Violin as well.” (Composers’ Forum transcript, December 15, 1937)

7. Huss’s diatribes did not go without comment, however. They certainly lingered in the mind of composer Jacob Weinberg, who recalled almost a year after Huss’s first appearance the composer’s “major triad” and “God” references: “I remember a composer here explained in the Composers’ Forum-Laboratory that those who don’t believe in the major triad don’t believe in sunshine . . . didn’t believe in God and I feel certainly very differently. . . . I remember a phrase from Mme. [Olga] Samaroff’s book [The Listener’s Music Book]: ‘every generation has modern music of its own.’ Certainly our generation also. We like sunshine and we believe in God but we express our beliefs and disbeliefs not by means of major triads. I believe our God is not diatonically–minded.” (Composers’ Forum transcript, April 14, 1937)

8. In the most extreme cases, the question–and–answer sessions erupted into violence. Henry Brant recalled a post–concert clash between fans and detractors of his music, exacerbated by the supporters of Paul Creston, the other composer on that evening’s program, who came in on the antimodernist, anti-Brant side of the dispute. According to Brant, not only did the Forum audience riot, “they broke into two factions: one supported my music and the other was against it. They started arguing with each other.”(Henry Brant, interview by the author)

Melissa J. de Graaf is Associate Professor of Musicology at the Frost School of Music at the University of Miami. Her book The New York Composers’ Forum Concerts, 1935-1940 was awarded the H. Earle Johnson Book Publication Subvention by the Society for American Music in 2013. She is currently working on her second book, Stars, Suns, Moons, and Mountains: Nature, Gender, and the Ultramodernists.