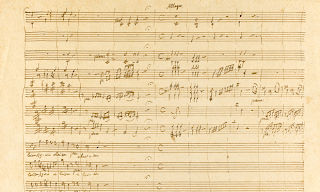 The Mozart manuscript, five pages containing 49 bars of a Kyrie in C, K. Anh. 18 (166F), written when he was 16, comes with proper intrigue, having not been widely seen since it was smuggled away from Germany by its owner in 1938; the titled wrapper, sent with the family furniture in 1939, was lost when the freighter was torpedoed and sank.

The presumed economic effect of the semi-frenzy in the press—that the price would be driven wildly up and the document subsequently sequestered by a private collector—became the subject of colloquy among professional musicologists, prompting an essay by Jonathan Bellman where he concludes: “I don’t see an ethical issue with the discussion of a newly emerged, long-lost manuscript. ... “Besides, I find the ethical issues involved in expecting people to muzzle themselves about important discoveries to be far more problematic.”

So much for light beach reading.