Note: The next installment of the AMS-Library of Congress Lecture Series will be on 7 October in the Library of Congress’s Coolidge Auditorium. Carol Hess’s lecture is titled “Copland as Good Neighbor: Cultural Diplomacy in Latin America during World II.” Prof. Hess writes:

Scholars and the general public have long acknowledged Aaron Copland’s attraction to Latin America, noting his associations with several composers from that region and his Latin-themed works such as El salón México, Danzón cubano, and Three Latin-American Sketches. Between 1932 and 1972, Copland made eight visits to Latin America, four as a cultural diplomat under the auspices of the U.S. State Department (1941, 1947, 1962, 1963). His cultural diplomacy in Latin America remains largely unexamined, however, despite the rich trove of materials in the Aaron Copland Collection of the Library of Congress. Here we find the diaries Copland kept during these visits, his reports for the State Department, correspondence with Latin American musicians, concert programs of his performances, reviews of his works from Spanish- and Portuguese-language presses, and scripts of the radio broadcasts he gave in various Latin American capitals. 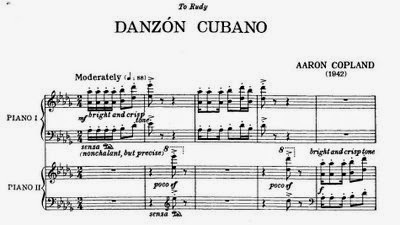 My talk focusses on Copland’s 1941 trip, the most extensive and, from the standpoint of cultural diplomacy, the most urgent. It took place at the height of President Franklin D. Roosevelt’s Good Neighbor policy, which sought to counter Nazi infiltration in the Western hemisphere. Copland, who had enthused over “a new world with its own new music” that could challenge the European tradition, was ideally suited to promote a fundamental tenet of the Good Neighbor policy, namely, the idea that the Americas are united by shared historical and cultural experiences. Analyzing the Library of Congress materials enables us to explore the musical ramifications of this principle as manifested in Latin American reaction to Copland’s works. I will propose that the 1941 trip, undertaken when U. S. cultural diplomacy was in its fledgling stages, anticipates the ultimately ephemeral nature of Good Neighborly ideology, which Copland nonetheless enthusiastically promoted during this most overtly political of his Latin American trips.

Carol Hess is Professor of Music at the University of California, Davis. Her most recent book, Representing the Good Neighbor: Music, Difference, and the Pan American Dream, was published by Oxford University Press in fall 2013.