Within Schenker’s vast Nachlass is a mass of documentation that reveals his “human” side, neglected by scholars for half a century after his death in 1935: his private life, his psychology, his interactions with other people.  These documents chart the long-term growth of his theoretical ideas, the genesis and development of each individual work, published and unpublished, his day-to-day mode of working, his internal thoughts, and all his dealings with the outside world, personal and commercial.

The aim of Schenker Documents Online (SDO) is to publish this material in its entirety in German and in English translation, with detailed critical notes and commentary, and make it available free of charge to all on the web.  A large amount is already accessible at the main website, and more is presented on an older site, the contents of which are being ported across to the main site.

At the heart of this personal corpus lies his diary, 4,000 pages spanning his entire 40-year professional career and preserved at the University of California, Riverside, which record (among other things) progress on current projects, the stages of publication, the letters he sent and received, his impressions of plays, concerts and radio programs, his reaction to newsworthy events and political developments, his purchases of household items, books and clothing, and (increasingly) his health. 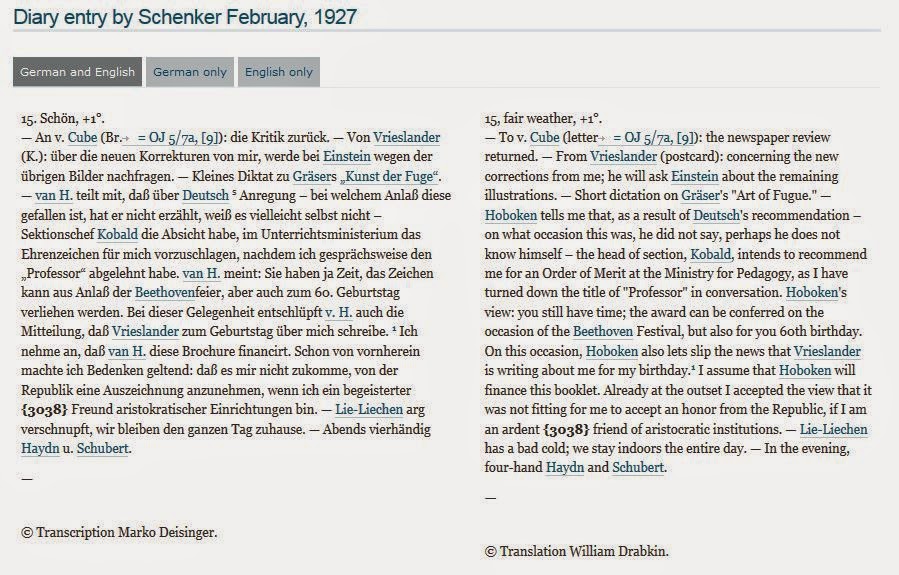 Schenker conducted a vigorous correspondence with probably close-on a thousand people and organizations.  Of this, over 7,000 items survive with some 400 correspondents, preserved in many collections in the U.S., Austria, Germany, Holland and elsewhere, with new finds still turning up.  A major part of this comprises correspondence with his publishers, a very significant part that with his pupils and close professional friends;  but there are letters to and from family members, and communications with educational institutions, commercial companies, and individuals. 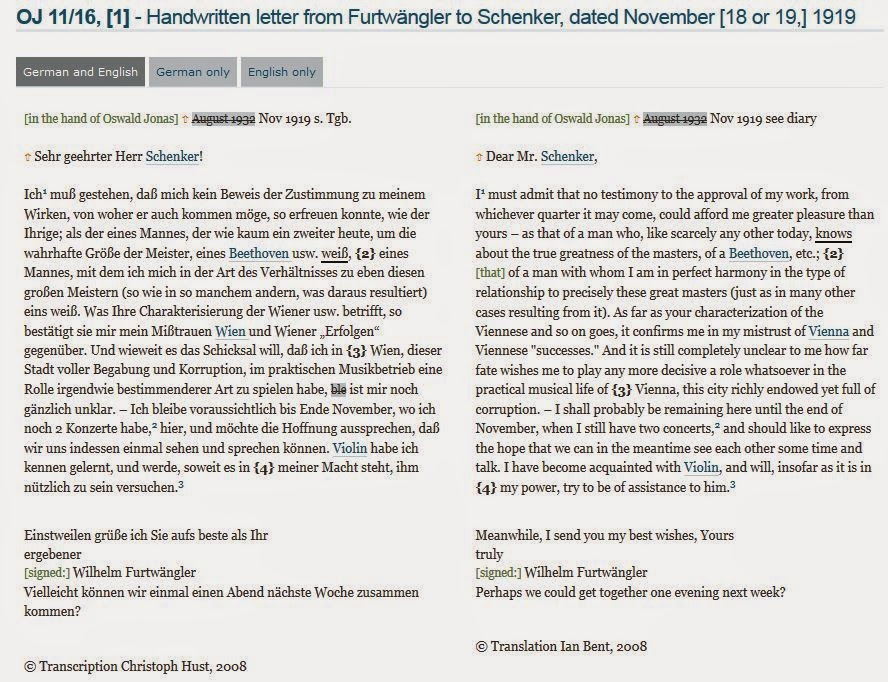 For the years 1912 to 1931 he kept meticulous records of the private lessons that he gave to all his pupils.  These detail works studied, theoretical topics covered, performance practice issues and source studies engaged in, and analyses carried out.  They are preserved in the New York Public Library. 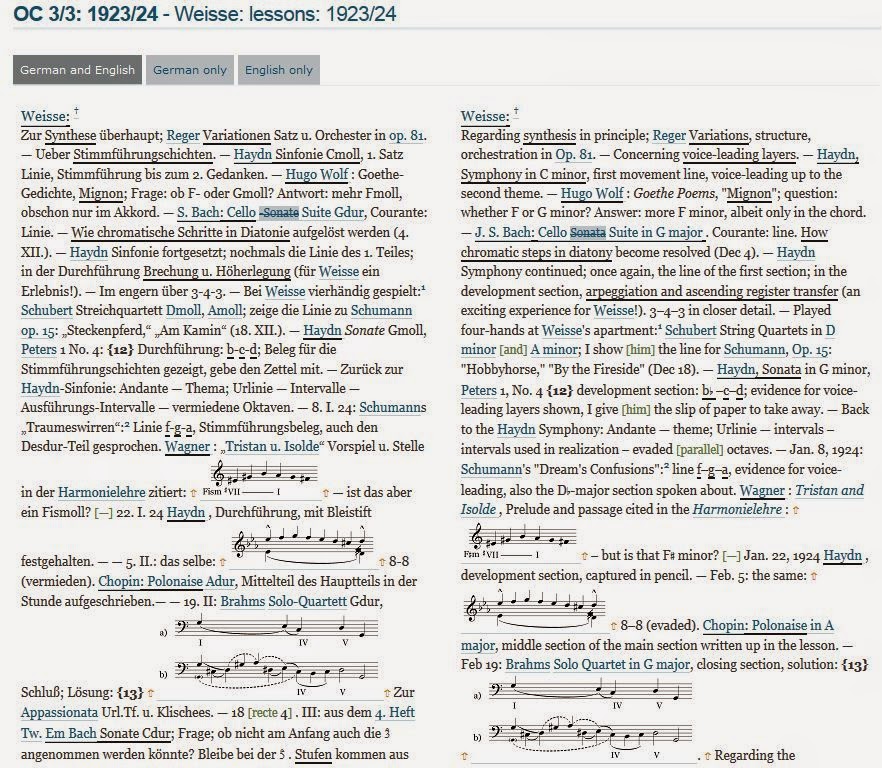 In addition to edited documents, SDO also has its own internal “dictionary” of people, places, and institutions.  Called “profiles,” these can be linked direct from the documents, and can themselves link to other documents and profiles. 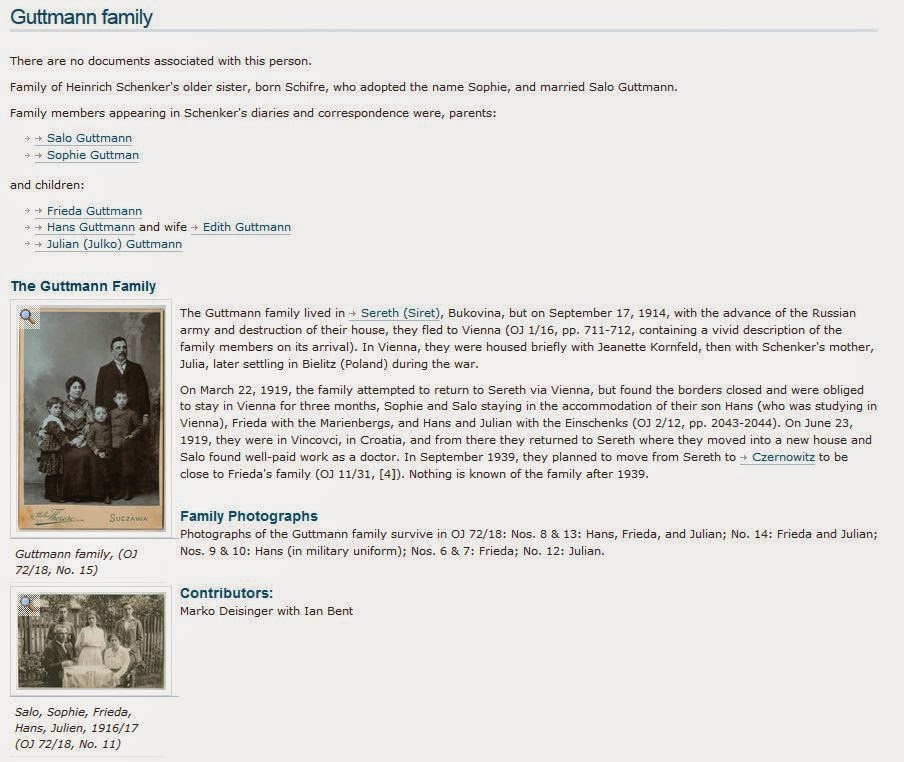 SDO has an editorial team of about 20 scholars working (unremunerated) in the U.S.A., the U.K., Austria, and Germany, and a team of technical experts.  It is currently run under the auspices of the University for Music and the Performing Arts in Vienna in collaboration with the Music Department of the University of Southampton and the Department of Digital Humanities at King’s College London.  It gratefully acknowledges funding from the Leverhulme Trust, the U. K. Arts & Humanities Research Council, the Austrian Science Fund, and the research funds of Music Analysis and Music and Letters.