their words about music defined an era

For decades during the last century, each artist reigned with unchallenged authority in his particular sphere, Thomson as the nation's most brilliant and erudite music critic, Bernstein as America's towering conductor, composer, pianist, educator, author and cultural celebrity, classical music's Great Explainer. Directly or indirectly, each artist helped to put classical music at the center of mainstream cultural discourse in the U.S., a position it hasn't held since their passing (Thomson died in September 1989, Bernstein a little more than a year later). Each was as much a product of his time and place as he was a significant influence on how classical music was and is made, marketed and received.

The recent publication of two hefty anthologies of their writings—the music criticism and essays Thomson wrote for the New York Herald Tribune from 1940 to 1954; and the correspondence to and from Bernstein from 1932 until just before his death in 1990—sheds a revealing light on a golden age in America's musical life, as seen from the perspective of key figures who helped shape it. 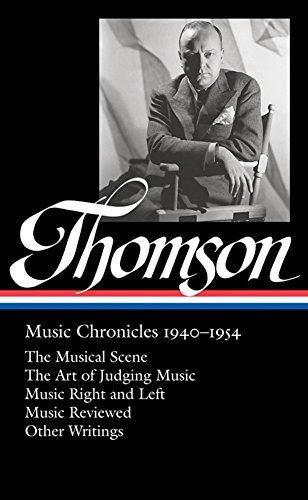 Thomson wrote criticism with a composer's insights into how music is made and a performer's knowledge of the realities of making a career in front of the concert public. ... Thomson did not regard himself as a supreme arbiter of public taste so much as an informed bearer of what he called “straightforward and eminently sensible attitude(s),” expressed in clear, direct journalistic prose. A critic “does his duty best,” he wrote in 1954, “when he describes and explains to the public what the artist is doing. If he adds a paragraph of personal opinion, that is his privilege.”

Thomson added much more than personal opinion to the reviews and essays gathered in the nearly 1,200 pages of Virgil Thomson: Music Chronicles 1940–1954, as edited by Tim Page, a distinguished music critic in his own right. ...

Like most critics, Thomson had his biases and idiosyncrasies, and he apparently saw no conflict of interest in reviewing artists who played or sang his music. Unlike most of his colleagues, he wore his learning lightly and deployed the English language elegantly and straightforwardly. He is one of the very few music reviewers of any era whose writings compare favorably with those of another brilliant critical stylist, George Bernard Shaw.

When Thomson was wrong (as he certainly was in his withering dismissal of Shostakovich and Sibelius), he was grievously wrong. Whether his judgments were fair or unfair was far less important, however, than the reasoning behind them and the conviction with which he expressed them.

Thomson took Bernstein's music seriously and Bernstein thought the same of Thomson's, even if he conducted relatively little of it. And Bernstein got it right when he observed, in the New York Times obituary of Thomson, that “Virgil was loving and harsh, generous and mordant, simple but cynical, son of the hymnal but highly sophisticated.” 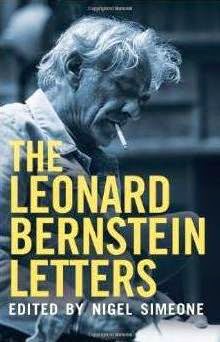 Let's be grateful for the discerning critical intelligence of Virgil Thomson and for the fact that his musical observations, in all their plainspoken wisdom, have been made permanently available, at long last. Let's be grateful, too, that Bernstein hoarded just about every scrap of correspondence that passed between him and colleagues, collaborators, lovers, artists, writers, celebrities and musical friends. Without them and without the voluminous Bernstein Collection in the Library of Congress, we would not have The Leonard Bernstein Letters, which Yale University Press has newly issued in paperback, complete with editor Nigel Simeone's meticulous footnotes and informative chapter introductions.

What a remarkable trove it is! Bernstein appeared to know everybody who was anybody, and his sharp wit and intellectual brilliance come through in his letters no less vividly than in his music-making. The wonder is that he had time to write any letters at all, given the fever pitch with which he conducted the rest of his life. ...

Dip into any part of this compulsively readable volume and you'll come away with a sense of the boundless love of music and boundless belief in himself that drove Bernstein and helped make him the most important musician America has yet produced.

John von Rhein has been the classical music critic of The Chicago Tribune since 1977.