Note: Our sister Society for American Music held its 2015 annual meeting in Sacramento, 4–8 March. Among the featured events was a concert by Anonymous 4 with guest instrumentalist/vocalist Bruce Molsky, titled 1865: Songs of Hope and Home from the American Civil War. The pre-concert lecture was given by SAM past president, Dale Cockrell. All this took place at the Robert and Margrit Mondavi Center for the Arts at the University of California, Davis—about 12 miles from downtown Sacramento. The following is adapted from Prof. Cockrell's remarks.

The United States was then a nation of surprising musical literacy, owing in large part to the role played by singing schools. One manifestation of this musical literacy was a large and developing sheet music publishing industry. In 1861, industrial technology, money, and the muse joined within three days of the firing upon Fort Sumter, when George F. Root published “The First Gun Is Fired! May God Protect the Right!”

Many Civil War songs were intended for home consumption and not necessarily the battlefield. This was largely the result of the economics of publishing, for publishers only profited by selling for use in American parlors, where pianos were available to accompany. Parlor song offered a powerful means of expressing identity: to sing or play “John Brown’s Body” or “The Star-Spangled Banner” told of allegiance on the issues of the day, as did, from another place, the singing or playing of “Dixie” or “The Bonnie Blue Flag.”

And music had the power to tell people how to feel. Take, for example, “Weeping, Sad and Lonely” (or, “When This Cruel War is Over”), from 1863, with music by Henry Tucker and a text by Charles Carroll Sawyer. This was probably the most popular song to come out of the war years.


Dearest Love, do you remember, when we last did meet,
How you told me that you loved me, kneeling at my feet?
Oh! How proud you stood before me, in your suit of blue,
When you vow'd to me and country, ever to be true.

This is sung to what must be called a nondescript melody, but then comes the memorable chorus:


Weeping, sad and lonely, hopes and fears how vain!
When this cruel war is over, praying that we meet again.

If the music here feels operatic in its exaggerated emotionalism, it is, for the melody contains more than a touch of Bellini. The war-weariness, from the perspective of the one at home thinking of the one on the battlefield, is manifest, and the title page notes says as much: “Inscribed to Sorrowing Hearts at Home." But “Weeping, Sad and Lonely” was banned from some camps because it supposedly eroded military morale. 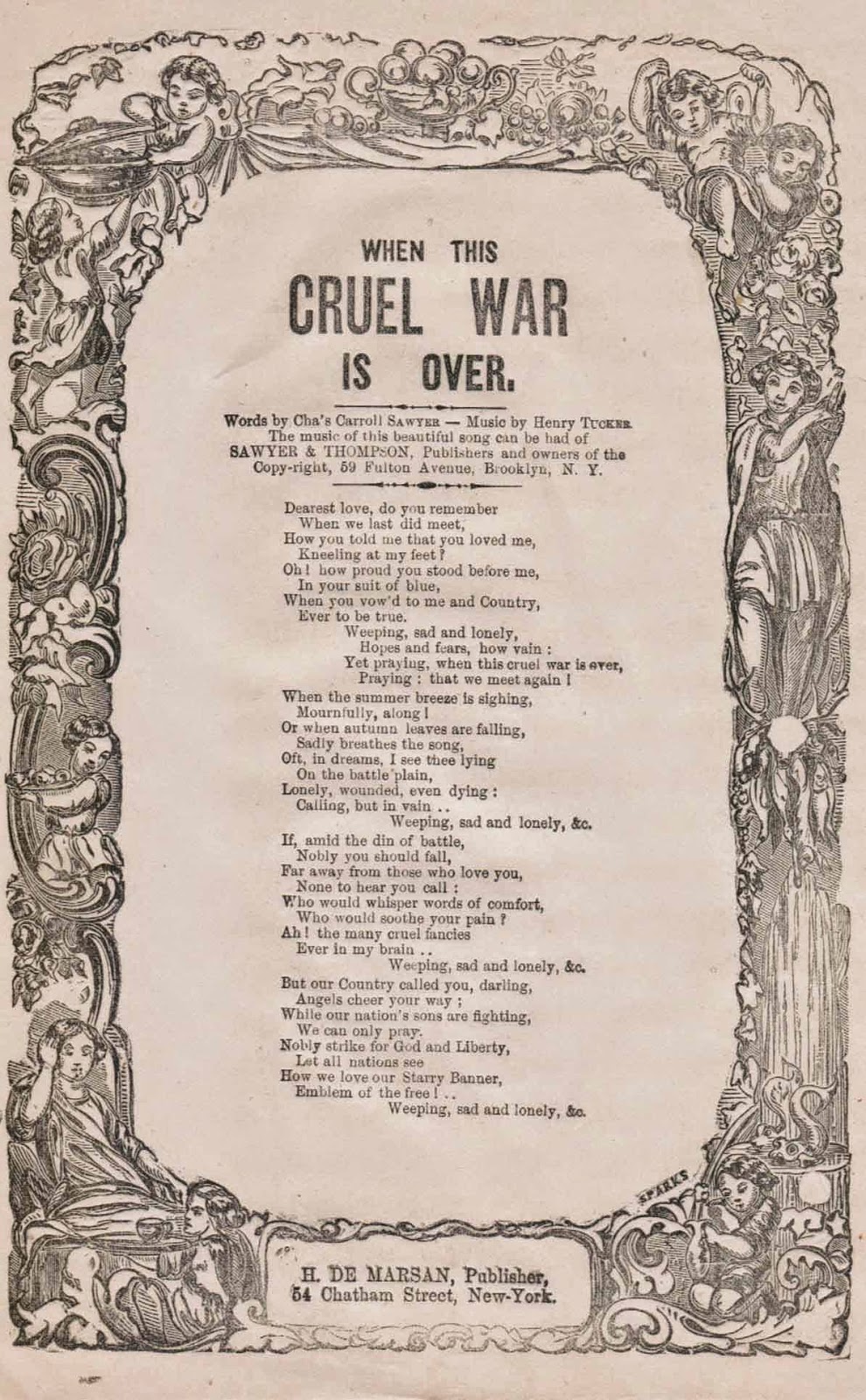 Songs like “Weeping” were not generally consumed as sheet music by the common soldier. Sheet music was a big, expensive packet of heavy paper with piano accompaniments, none of which was appropriate for a soldier’s knapsack. Rather the lyrics of songs came to the campground in broadside or songster form. Broadsides—single-sided pieces of cheap paper holding the text only—were sold by the millions during the nineteenth-century. A single piece of sheet music cost 25 cents, but one could buy a single broadside for one penny, or a songster with lyrics to perhaps sixty songs for 10 cents.

Wars reshape both the political and social landscapes. In the heat of battle, the man on your right is neither rich, poor, urban, rural, Irish, German, or from Illinois; to some extent in the American Civil War, he was neither black or white, for lest we forget, 36,000 black soldiers gave their lives during that struggle. The cultural landscape gets remade, too. Before the War, the categories of American musical expression were fairly discrete: hymns were hymns; popular songs were popular songs. Afterwards, it was more complicated. “In the Sweet By and By” (1868) is a sacred text but set in a musical idiom clearly derived from the Stephen Foster style.

More significantly, just as American political union was dictated by the outcome of the Civil War, so too was musical union. The cultural spoils of war went to the victors, and what resulted was a musical union based upon styles and sensibilities associated with and developed by the music publishing industry of the North. Southern styles and sensibilities stood by, waiting for later embrace. 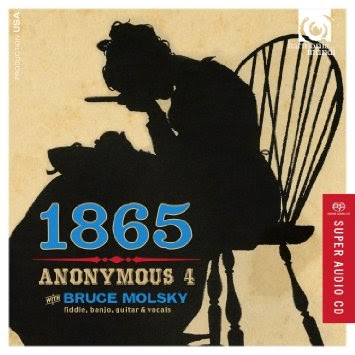 Dale Cockrell is Professor emeritus of Music at Vanderbilt University and former director of the Center for Popular Music at Middle Tennessee State University in Murfreesboro, TN. He is the author of Demons of Disorder: Early Blackface Minstrels and their World (Cambridge UP, 1997) and editor of The Ingalls Wilder Family Songbook (MUSA 22, 2011).