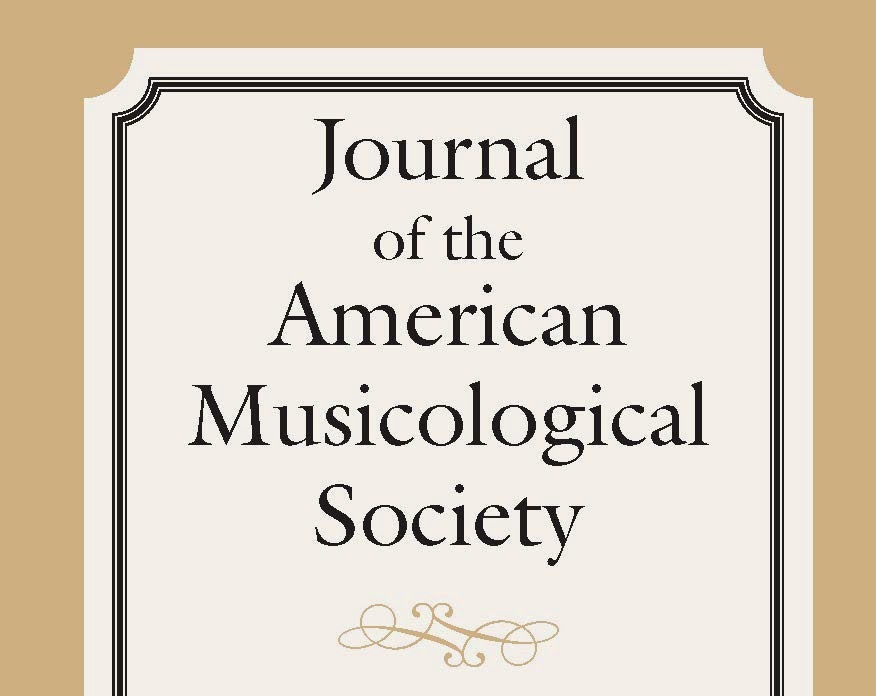 Volume 68, no. 1, of the Journal of the American Musicological Society—or JAMS, as it is familiarly known—is now live online. All of the articles contain embedded multimedia.

Staging Singing in the Theater of War (Berlin, 1805)
KATHERINE HAMBRIDGE

Body Knowledge: Performance, Intermediality, and American
Entertainment at the Turn of the Twentieth Century
by Mary Simonson
DAVINIA CADDY

MP3: The Meaning of a Format
by Jonathan Sterne
DANIEL VILLEGAS VÉLEZ

This article describes and analyzes two leaves from a mid-eleventh-century Gradual that survive today in the Franciscan Library repository in Dublin’s Trinity College Library and in the Archivo Histórico Nacional in Madrid. The fragments contain parts of the masses for St. Lawrence and for St. Martin, including introit tropes, a number of prosulas for the alleluia, and the beginnings of the prose for each mass, in Beneventan script. Despite the small amount of music and text that survives, a collation with manuscripts from Benevento and Montecassino allows us to posit that the Gradual was copied probably at but not for Montecassino, that the context of some of the pieces as cited in the extended tonary in MC 318 points to the cathedral of Capua as the place for which the Gradual was copied, and that these two leaves are virtually the only surviving monument of the Capua liturgy in the eleventh century. A number of the prosulas are apparently unica, which adds considerably to our knowledge of the repertory of prosulas south of Rome. Moreover, the notation of the proses was clearly modeled on an exemplar written in a manner used virtually nowhere else in Europe outside St. Gall and Reichenau, indicating that in some cases the Notkerian canon reached southern Italy in versions unmediated by north Italian transmission. The concordance pattern of one of the proses also indicates apparently unmediated transmission of parts of the Beneventan repertory to southern France, confirming direct contacts between Aquitaine and Benevento that have hitherto been observed only in the transmission of Aquitanian material to Italy.

Alejandro Enrique Planchart is Emeritus Professor of Music at the University of California, Santa Barbara, as well as a composer and conductor. He is issuing a new edition of the Opera Omnia of Guillaume Du Fay, to be published online by DIAMM, and his monograph Guillaume Du Fay will be published by Cambridge University Press in 2016. He is currently working on an edition of all the proses copied in Beneventan manuscripts, Beneventanum Prosarum Corpus.


Staging Singing in the Theater of War (Berlin, 1805)
KATHERINE HAMBRIDGE

Almost fifty years after the original event, Willibald Alexis’s historical novel Ruhe ist die erste Bürgerpflicht (1852) commemorated a musical performance that had taken place on October 16, 1805, at Berlin’s Nationaltheater. According to both Alexis’s reimagining and contemporary reports, after the closing “Reiterlied” of Schiller’s Wallensteins Lager a new war song was sung by audience and actors. The sensation this caused—in a city awaiting its troops’ departure for war against Napoleon—established Schiller’s play as a privileged site for political singing in Berlin and across German lands for the next decade. In this article, I account for this first occasion, its unusual press reception, and its influence by contextualizing it within a growing early nineteenth-century discourse on public communal singing, arguing that Berliners were self-consciously enacting French patriotic behaviors. As well as indicating longer-term continuities, I distinguish the political role attributed to war songs in this period from the more familiar Bildung-orientated discourse on choral singing and folk song. In contrast to established accounts that locate the emergence of popular political song in the volunteer movements of the Wars of Liberation and the national politics of the Burschenschaften and male-voice choirs, I suggest that these early performances show the official imposition of public political singing—as a kind of “defensive modernization”—in response to the Napoleonic threat. I thus revise our understanding of the establishment of singing as a modern political tool in German lands, and of the role of singing in the development of political agency and national sentiment more broadly.

Katherine Hambridge is a Research Fellow at the University of Warwick, where she is working on the AHRC-funded project “French Theatre of the Napoleonic Era.” She completed her PhD, “The Performance of History: Music, Politics and Identity in Berlin, 1800–1815,” at the University of Cambridge in 2013, and is now writing a book on music, theater, and genre on French and German stages under Napoleon I. She is also editor of the forthcoming collection of essays The Melodramatic Moment, 1790–1820.

The critical discourse on Carlos Chávez’s music is full of contradictions regarding the presence within it of signifiers of the Mexican, the pre-Columbian, and the indigenous. Between 1918 and 1928 Chávez in fact developed, from stylistic preferences that appeared early in his compositions, a polysemic language that he could use equally well to address the very modern or the primitive, the pre-Columbian or the contemporary mestizo, in and only in those works in which he chose to do so. Chávez’s referents emerged in dialogue with the cultural and political contexts in which he worked, those of post-revolutionary Mexico and modern New York. But he was attracted above all to modernism and modernity, and was impacted by cosmopolitan forces at home and abroad. By the end of the decade he had earned a position within the modern musical field’s network of social relations, and had drawn the attention of agents of recognition such as Edgard Varèse, Paul Rosenfeld, Aaron Copland, and Henry Cowell. These composers and critics added Chávez’s constructed difference to their much-sought collective difference as Americans within a European art. Chávez’s own use of explicit Mexican referents in some of his works shaped the early reception of his music as quintessentially American/Mexican, eventually influencing the way we understand it today.

Leonora Saavedra is Associate Professor of Music at the University of California, Riverside, and at Mexico’s National Center for Music Research (CENIDIM). She is currently editing a book of essays entitled Carlos Chávez and His World (Princeton University Press, forthcoming in 2015) and is Scholar in Residence at the Bard Music Festival for 2015. Her book Constructions of the Self in the Mexican Musical Imaginary is under contract with Oxford University Press.

Relating evidence from the mythological to the contemporary in both historical and media-archaeological registers, this article explores how techniques of sonic generation and representation shuttled between what might be defined as digital and analog domains long before the terms acquired their present meanings—and became locked in a binary opposition—over the latter half of the twentieth century. It proposes that such techniques be conceptualized via the “digital analogy,” a critical strategy that accounts for the nesting of techno-musical configurations. While the scope of digital analogies is expansive, the focus here falls on a particular interface and mode of engagement. The interface is the keyboard; the mode of engagement is the play, both ludic and musical, that the keyboard affords. Operations at the keyboard have been integral to ludic communication and computation as well as to the practices of composition, performance, and improvisation. To map out this genealogy and to show how it continues to inform loci of musical play from sound art to digital games, the article draws on an array of critical and theoretical texts including Friedrich Kittler’s media analyses, Vilém Flusser’s writings on technology, and post-Foucauldian discourses on cultural techniques.

Roger Moseley is Assistant Professor in the Department of Music at Cornell University. His current research explores the ways cultural techniques of play have informed improvisation, performance, and recreation at the keyboard. His article on Brahms’s Piano Trio in B Major, op. 8, was awarded the Royal Musical Association’s Jerome Roche Prize in 2009. Active as a collaborative pianist on modern and historical instruments, he is currently completing his first book, The Keys to Play: Music as a Ludic Medium from Apollo to Nintendo.