Professor Reynolds here reflects on the genesis of Wagner, Schumann, and the Lessons of Beethoven’s Ninth (University of California Press, 2015). [Professor Strunk was fond of reminding us how “You have to be in the haystack before you can find the needle.” —DKH]


My book examines the decisive impact of Beethoven’s Ninth Symphony on Robert Schumann and Richard Wagner during the year 1845-46. During this year, when they both resided in Dresden, they had multiple meetings with each other. This is also the year that their musical styles changed significantly, both of them developing more contrapuntal approaches to composition. The extent to which their compositional styles changed in a common direction, toward a style that was more contrapuntal, more densely motivic, and also engaged in processes of motivic/thematic transformation, has largely gone unexamined. I try to show that the stylistic advances that Schumann and Wagner both made during these months stemmed from a deepened understanding of Beethoven’s contrapuntal techniques and formal strategies in the Ninth Symphony, especially its first movement.

Whether the original insights were Schumann’s or Wagner’s, the evidence provided by their compositions from this pivotal year and the surrounding years suggests that they discussed Beethoven’s Ninth with each other in the months preceding the performance of this work that Wagner conducted on Palm Sunday, 1846. What appears to have interested them both was 1) Beethoven’s use of counterpoint that involved contrary motion, and 2) the way in which the Ode to Joy melody was developed gradually in the preceding movements, so that the appearance of the theme in the finale was dramatically and musically motivated.

The extended dramatic program Wagner wrote for the Ninth plays an important role in my analysis. He constructs a battle narrative to depict a struggle between good and evil. It is important that the German words for counter maneuver (military) and contrary motion (music) are both the same, Gegenbewegung. This allowed Wagner’s narrative to be based on a musical technique that Beethoven made important use of in the Ninth Symphony. The breakthroughs that Schumann and Wagner had in Dresden in 1845-46 allowed them to apply Beethoven’s techniques, forever changing their styles.

When I began writing this book, my very different plan was to analyze several pairs of works, identifying the musical features that they shared and then using those observations to say something new about the works individually. I had just published my comparison of Gershwin’s Porgy and Bess and Alban Berg’s Wozzeck, and I thought that perhaps that article might serve as both a chapter in the book and a model for how I would proceed with other pairings. My method in the Gershwin-Berg confrontation involved a triangulation of sources. There are the two works to compare, of course, but their reciprocal interpretation is guided by some biographical or historical document. In my study of Porgy and Bess, the Willi Reich analysis of Wozzeck from 1927 gave focus to the comparisons of music and drama; indeed, it made it possible to identify them in the first place. 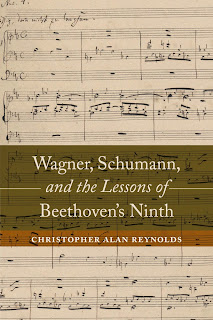 My intention was to gather a series of confrontations that were to have included a chapter on how Wagner’s opera The Flying Dutchman can be understood as a free, but thorough, reworking of Beethoven’s Ninth Symphony. In seeking to explain what musical details motivated Wagner’s narrative for the first movement as a struggle between good and evil, I gradually came to a conclusion that I had not anticipated; namely, that Wagner had found the seeds for his conflict narrative in Beethoven’s manipulation of counterpoint by contrary motion. With this discovery, the relatively contained “chapter” I had anticipated quickly expanded into a book of its own.

One discovery led to another. Several of the compositions that I examine involve works that have already been recognized as related, such as Beethoven’s Ninth and Brahms’s First Symphony, and the Ninth and Schumann’s Second. But there are also several unexpected juxtapositions: Schumann’s Second Symphony and Tristan und Isolde, Tristan and Bach’s Cantata 21, and Brahms’s First and Wagner’s Faust Overture, among them.

This project is an obvious outgrowth of my interest in musical allusion, but while occasionally I point out allusions between works, most of the shared ideas are not necessarily allusive. This is not a study of how Schumann and Wagner alluded to Beethoven’s Ninth. My argument is broader, that Beethoven’s successors discovered techniques Beethoven had used in the Ninth, and from the moment of discovery, began to apply these techniques in their own works.