When Harry Partch died in 1974, many believed his legacy would die with him. Ben Johnston, Partch’s student and an eloquent exponent of just intonation, warned in a 1975 speech that his death “underlies the urgency that something else has to happen: the rescue of his life-work, which could easily slide into oblivion.” Johnston’s fears were justified. Partch’s musical achievements were more connected to his personal presence than almost any composer I know. His music was written in just intonation for instruments of his own creation using a tablature-based notational system distinctive to each instrument. The instruments were fragile, requiring such constant upkeep that during rehearsals and performance he was tuning and repairing them daily. His typical procedure for mounting one of his music theater works was to train the musicians by modeling the approach and stance for each instrument, so they would not only play the right pitches, but be mindful of the visual impact of their performance as well. As you can imagine, productions of his theatrical works during the 1950s and 1960s were built on his personal charisma, his dogged drive to create his art without compromise, and his corporeal presence, to borrow Partch’s term for the music he sought to create. Without Partch around to fulfill all these roles and more, there was a real possibility his art would fade into legend.

Fortunately, the determination of Partch’s heir Danlee Mitchell and a sturdy handful of musicians and scholars kept Partch’s music, aesthetic, and legacy alive. Although materials were scarce and opportunities to hear his music rare, there was a steady stream of Partch related happenings starting in the 1980s. From a landmark 1980 production of The Bewitched at the Berlin Festival, to Newband’s performance of The Wayward at the 1991 Bang on a Can Festival, to the publication of Innova’s Enclosure series and Bob Gilmore’s biography in the late 1990s, every few years found another moment where Partch popped up in the cultural fabric. However, these isolated incidents could not have prepared anyone for the torrent of Partch-related materials and events from the past three years. Consider the following:


The resulting performance was so successful that the Edinburgh International Festival invited the Ensemble to bring the production to the King’s Theatre in August 2014, and the Lincoln Center Festival has invited it to New York in July of this year. 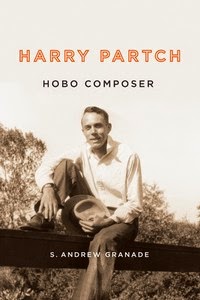 And there is more to come. Filmmaker Jon Roy is at work on a documentary called Bitter Music: The Life of Harry Partch;  Charles Corey and the University of Washington have ideas for more public performances and even summer workshops; and new scholarship is appearing all the time. In Stephen Pouliot’s graceful documentary The Dreamer That Remains: A Portrait of Harry Partch, filmed in the years leading up to Partch’s death, the composer exclaimed: “I would choose to be anonymous. Of course! I’m thinking of those fantastic cave drawings in southern France and in northern Spain, at Altamira I think it is. And there’s no author there! And what a treasure they are! And who cares who did them, how many thousands of years ago. Of course, I’m not saying that anything I do is going to last that long. But who cares what the name was!” Despite that self-effacing statement, it seems that the world increasingly does care about the man who created some of the most expressive, earthy, and deliriously idiosyncratic music of the 20th century.

Andrew Granade is Associate Professor of Musicology and Chair of Composition, Music Theory, and Musicology at the Conservatory of Music and Dance, University of Missouri, Kansas City.