A grainy old photograph taken more than a century ago in Adyar, South Chennai, in Tamil Nadu, opens a revelatory window onto the history of Indian music in the West. A group of musicians is playing (mrdangam and saraswati vīna) and singing on the grass under a tree; their expressions convey, variously, concentration, interaction, and joy. Among them, cross-legged, is a slight, dark-haired young woman. Her face is not visible because her head is bent over some manuscript paper upon which she has noted the song text and some pointers about the rāga. On her right, the main singer who is her guru is tapping out the music’s tāla on his thigh. 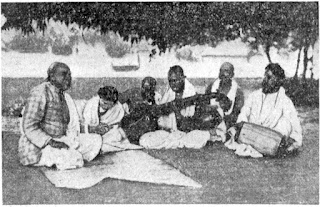 The story of Maud MacCarthy, the lone woman in the picture—of how an independent, professional musician made her way to India in the early years of the century, absorbed the music through immersion and practice, and returned to take on a new, albeit unofficial, role at the center of the English musical establishment—is one that challenges conventional images of the Indo-British colonial encounter, of the role of women in music, and of the history of Indian music in the West. Alongside photographs, reams of hitherto unseen field notes dating back over a century, carefully preserved by MacCarthy’s granddaughter, enable us to place her work firmly in the field of ethnomusicology. It is only now, through study of the extensive family collection that we are able to record and analyse for the first time the field work done by MacCarthy, and to reassess her significance in contemporary musical life. 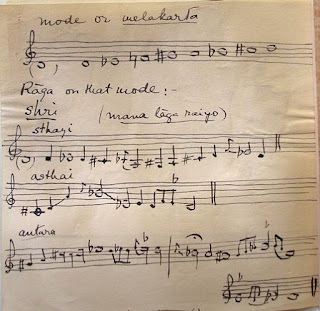 For two decades, from 1909 to 1929, driven by a commitment to bridging the colonial divide and “the colour bar” as she termed it, MacCarthy tirelessly gave lecture-recitals across Britain and in Paris, earning the acclaim as well as the friendship and respect of Indian, British and French luminaries in literary and musical circles.

Musicians and composers, even bookish ones like Gustav Holst, were far more drawn to MacCarthy’s work than they were to the theoretical and historical books published at the time. One reviewer put it succinctly: “we urge all who have the opportunity, to go and hear one of MacCarthy’s performances, from which more idea of the spirit of Indian music can be gained in an hour than from books alone in a year.”

Nevertheless, it was Arthur Fox Strangways’s book, The Music of Hindostan, which made, and left, an official mark on the era. Indeed, illness, family responsibilities, lack of institutional support or financial stability, all conspired against the book MacCarthy had planned and, following the upheaval of her long-term return to India, MacCarthy’s work was forgotten.

But her influence continued through her husband, the self-taught Mancunian composer, John Foulds. Since meeting MacCarthy in 1915, he had been uniquely placed to learn Indian music and did not waste his opportunity! Foulds based several of his most ambitious compositions on Indian musical elements. The first fruit of this endeavour was a set of piano pieces entitled Essays in the Modes, each based on a South Indian mode or Karnatic mēlakarta.

This method of composition using mēlakartas underpins some of the most adventurous of Foulds’s larger orchestral canvases. In the wake of the Essays in 1929, he completed the Dynamic Triptych, a three-movement piano concerto in the tradition of the bravura works of Liszt and Rachmaninoff. Its first movement, Dynamic Mode, is based wholly on a mēlakarta. The following year, he finished the last of his Three Mantras, the Mantra of Will and Vision of Cosmic Avataras, which is an orchestral tour-de-force, modernist in its conception, and generated entirely from the seven pitches of the mēlakarta Dhavalambari (this distinctive mode also appears in Holst’s Neptune, where it is pitched a perfect fifth higher).

Sketches for the Mantra of Will bear the pencil note, “to invoke the Rakshas.” These are the forest demons of Hindu mythology who attack seers, sages, and yogis. In the Ramayana, they are led by their ten-headed king Ravana. Foulds’s invocation of the Rakshasas is constructed over a syncopated seven-beat rhythmic phrase (a mantra) that is heard throughout. In the composer’s sketch, the repeating rhythm is visible in the upper stave. In the fourth bar, a second voice joins the ostinato, creating parallel fifths and tritones with the first.

This modernist invocation of Ravana’s demonic rakshasas was far from the prevailing “pomp and circumstance or pastoral” aesthetics of the “English Musical Renaissance.” Among the most potent factors determining success for composers in the 1920s and 30s was the wireless, whose coming, Ernest Newman noted, “had placed the musical destiny of this country in the hands of the BBC.” Foulds’s music was not part of that destiny. There was certainly a strong layer of politics underlying the music choices made at the BBC and, apart from his lighter works, as the internal memos demonstrate, Foulds did not fit in. None of the Mantras or the Essays in the Modes, among other serious works, was performed or broadcast. 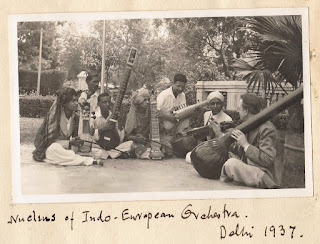 At the height of his creative powers, Foulds (along with MacCarthy) abandoned the “austere, colourless” London of the 1930s for India. There, he completed the earliest transcriptions known to us of classical Indian music for orchestra, and was appointed Director of European Music at All India Radio—a “grand and responsible” role at the heart of Indian broadcasting. When Foulds arrived at the Delhi station, the very approach that he brought with him, via MacCarthy, ran contrary to imperial ideas. Although Director of European Music, Foulds formed an ensemble made up entirely of Indian musicians playing Indian instruments which began to broadcast Indian music in his own arrangements. Thirty years after MacCarthy had sat down among fellow musicians in Adyar, Foulds sat with musicians in Delhi. And, just months after that famous stroke of the midnight hour, when India awoke to life and freedom, Ravi Shankar inherited the Foulds ensemble, as well as the composer’s folk song transcriptions and arrangements, using them as the (unacknowledged) model for his own music making as director at the Delhi station.

Excerpts from Resonances of the Raj by Nalini Ghuman (Oxford UP, 2014). See also the companion website at OUP.

Nalini Ghuman is Associate Professor of Music and Affiliated Asian Studies Faculty at Mills College. Publication of her book was supported by subventions from the AMS 75 PAYS Endowment and the Manfred Bukofzer Endowment of the American Musicological Society.