Season 9 of NBC’s The Voice kicked off this week with its signature blind auditions, during which contestants aimed to win the celebrity coaches’ approval solely through vocal merit. It’s a tantalizing and romantic gimmick. Sing beautifully enough, and you can go the distance, no matter who you are or what you look like.

On Monday’s premier episode, full-figured contestant Jordan Smith gave a rousing performance of Sia’s “Chandelier,” getting all four coaches to hit their buttons. Gwen Stefani, upon swiveling around, literally almost fell out of her chair. She exclaimed: “Whaaat? Whaaaaat?” Flabbergasted by what she sees and hears, she ran up to the stage after the audition and threw her arms around Smith while crying out, “Oh my god! You shocked me!” Moments later, she couldn’t help clarifying: “You do not look like your voice, FIY.” (…thank you?) 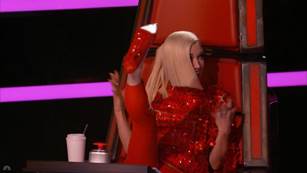 Stefani’s patronizing song and dance embody much of what’s so problematic about blind auditions as a whole. (None of the other coaches, for what it’s worth, looked nearly as fazed.) Sure, Jordan Smith appeared obese. But since when are big bodies incapable of producing a beautiful voice or, for that matter, of being beautiful in their own right? Must we relive the Susan Boyle phenomenon over and over?

For a reality show that’s all about the voice, there’s an unvoiced question that has resonated season after season: what prejudices exactly are these blind auditions meant to address?

The obvious answer is appearance. With coaches’ backs turned toward the stage, a performer’s age, height, weight, wardrobe, skin color, and any visible disabilities are removed from consideration, leaving only audible traces and aural scrutiny. So far, so good—surely, we shouldn’t let skin-deep beauty dominate our assessments of singers.

Problems arise, however, when we treat blind auditions as a magical cure-all for prejudice. In reality, they let us off the moral hook, allowing us to forego difficult discussions about prejudice and why blind evaluations are ever needed in the first place. Afraid of being accused of discriminating against obese singers or Asian singers or disabled singers? Turn your back on them and claim to judge them, in good conscience, on vocal ability alone. Afterwards, you can tell them you liked or disliked their performances without ever once mentioning touchy issues of bias or body shape.

Don’t get me wrong. Blind auditions are a convenient Band-Aid, a temporary fix that enables people to conduct fair adjudications (whether it’s blind symphony orchestra auditions, need-blind college admissions, double-blind academic peer-review, anonymous scoring on Project Runway, or a celebrity chef insisting on cooking behind a screen to conceal herself from sexist customers). But as useful as Band-Aids can be, they’re not enough when wounds run deep. And as we know, the wounds of societal injustice—stigma, discrimination, systemic inequality—are as deep as they come.

In the long term, putting on blinders and cultivating anonymization won’t produce a just society, because the point isn’t to accept people despite their appearances and identities and quirks. The point is to recognize that only with diversity on full display can we initiate vital conversations, face to face, about tolerance and compassion.

Case in point: in 2013, a contestant named Andrea Begley tried out for The Voice UK. When asked after her performance why she wanted to audition, Begley, who lives with advanced glaucoma, declared she enjoyed the “basic reason that you guys couldn’t see me and I couldn’t see you so, for once, I’m on a level playing field.” The coaches and studio audience chuckled delightedly: a double-blind audition, serendipitous parity, and Begley even went on to win the entire season—what could be better? Not much … except one would hope she could’ve won even if the auditions hadn’t been blind, and even if the coaches had been able to see her from the outset (thick glasses, body type, and all).

Although conventional wisdom may insist otherwise, blind reviews aren’t so much a gold standard as they are a last resort—an admission that, unfortunately, sometimes the only way to bypass discrimination is to cut multiple variables of a human being out of the equation. And the very fact that blind auditions still seem so logical and justly meritocratic means that we’re not dreaming big enough about what needs to change in society. Sociologists Stephen McNamee and Robert Miller Jr. call meritocracy a myth, an “ideology of inequality” in which “those who have more must convince those who have less that the distribution of who gets what is fair, just, proper, or the natural order of things.” The question, then, isn’t whether we already live in an ideal world where blind auditions are unnecessary (we obviously don’t). The real question, rather, hinges on what we can do to make this sort of world possible.

None of this means we should abandon blind auditions wholesale. It simply means we must acknowledge them as little more than stop-gaps for inequality, as mere stepping stones toward justice. It means we watch The Voice skeptically, seeking out hints of what characteristics and deviances (race, gender, body type) do or do not benefit from being hidden, and why.

Above all, it means we don’t turn our backs on one another, and instead face the music—the tough questions and the crucial conversations, squarely in the spotlight.

William Cheng teaches at Dartmouth College and is author of Sound Play: Video Games and the Musical Imagination (Oxford University Press, 2014). His work on blind auditions will appear in a forthcoming book project, Meritopia: Listening for Beauty and Injury in 21st-Century Life. Website HERE.