In 2004, challenged by my thesis advisor, I travelled to Paris to conduct research on Nadia Boulanger (1887–1979) for the first time of many visits. While in the City of Lights, I walked the streets traversed by Boulanger’s former students—included among them Aaron Copland, Virgil Thomson, Louise Talma, and Philip Glass—and visited her famous apartment at 36 rue Ballu (now 1 Place Lili Boulanger). This trip also marked the first time I had the honor of perusing Boulanger’s expansive archives. I quickly became enraptured by her world, a sphere of influence that stretched across the Atlantic, eventually reaching global dimensions. Hers was a career that lasted from 1904 to 1979, thriving during the politically tumultuous and tremendously misogynistic climate of the modernist era. In Boulanger’s world, pedagogy was enacted with a near-religious fervor, and at its center stood a woman who had a masterful command of the rules governing artistic creation and validation. No figure towered more dominantly in her pantheon of great artists than Igor Stravinsky. 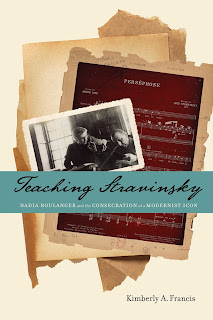 In my book, Teaching Stravinsky: Nadia Boulanger and the Consecration of a Modernist Icon (Oxford UP, 2015), I reconstruct Boulanger’s unwavering belief in Stravinsky’s artistic genius and her precarious friendship with the composer. Drawing on the letters they exchanged (well over 1,000 pages) and the Stravinsky scores Boulanger owned (more than 170), I offer a story of vibrant artistic life and professional survival during the twentieth century.

Most importantly, and serving as a frame for all of my work on Boulanger, is the question of how her successes and failures can be understood in the context of women’s lives. I consider her as part of (as well as virulent opponent of many aspects of) the complex French feminist movement. I also reconstruct societal hostilities toward women, first in France during the interwar period, and second in the United States after the Second World War. Analyzing how Boulanger negotiated the cultural spaces to which she had access—many of which she had to fight to enter—and contextualizing them in terms of women’s freedoms, or lack thereof, I reveal the tenaciousness of Boulanger’s professional ambition. Certainly she lived in a world where success depended upon a command of gendered politics—a skill set she honed over the course of her career.

Nadia Boulanger first met Stravinsky after the premiere of the first of his three Sergei Diaghilev commissions: L’Oiseau de feu (1910). Little was more captivating to Boulanger—at the time an emerging keyboard virtuoso and opera composer—than the exotic, breathtaking productions of the Ballets Russes. If later tales are to be believed, Boulanger was entranced by Stravinsky’s music after only the first few notes. The night of the premiere was the first time she met Stravinsky—a man only five years older than she and barely taller. (She was 5'4".)  They did not meet again until after the First World War. Following 1919, Boulanger reemerged in Paris professionally reinvented, working now as a teacher instead of a performer-composer, and it was then that Stravinsky’s music assumed a central place in her teachings.

Ten years later, it was an anxious note from Stravinsky, sent to Boulanger while she was on summer vacation at her cottage in Gargenville in 1929, that served to bring the two into more frequent contact. Stravinsky wrote to her that he needed a teacher for his son, Soulima: would she be willing to serve in that capacity? She agreed. From that October on, she grew close with Stravinsky’s sons and later with the composer himself. More than a master composer observed at a distance, Stravinsky became a colleague and friend. Boulanger’s understanding of his compositions, then, became informed by her understanding of him as a person, particularly as a loving father.

She gained editorial access to Stravinsky’s music in 1931 with her work on the piano-vocal reduction of his Symphony of Psalms. In the years following, she interceded on his behalf with American impresarios, while also conducting, performing, and promoting his compositions. She incorporated her intimate knowledge of Stravinsky’s methods and his philosophies into her own teaching, allowing her first-hand observations to to play a primary role in establishing her reputation as a
Master Teacher. What could possibly be more exciting than examining a new work, the ink on the score barely dry, beside the woman who had been present when it was rehearsed for the first time in the composer’s presence? The almost visceral enjoyment Boulanger took in Stravinsky’s music transferred into her classroom, as student lecture notes reveal. Overall, her work as a teacher saw her transform into an extremely commanding presence in music circles after 1920.

Boulanger’s letters to Stravinsky, particularly during her exile in the United States during the Second World War, are often uncomfortably raw and emotional. Clearly, Stravinsky was one of the few people Boulanger considered a peer. Through the works he composed, Stravinsky validated Boulanger’s artistic opinions and became one of the few people in Boulanger’s life who alleviated her sense of isolation and solitude. Tracing her shifting relationship with him allows us to view aspects of Boulanger’s personality that she otherwise kept private, hidden especially from her students. Her dialogue with Stravinsky allows Boulanger to be studied from multiple angles, warts and all. The letters also tell us more about Stravinsky, his deep-seated faith, his love of family, his intense ambitions, and his fear of being forgotten by history.

I travel the narrative of this remarkable friendship and symbiotic musical relationship from Nadia Boulanger’s perspective, tracing the entwining of her professional connections with Stravinsky’s and asking how the personal and the professional (though never the romantic) became increasingly muddied from 1929 until the pair’s relative estrangement in 1951. Boulanger emerges as a champion of Stravinsky but also of herself, taking every opportunity to support his music as well as her own worth as a teacher. She becomes a lens through which to view Stravinsky’s development as a modernist composer, and Stravinsky becomes a thread that allows for a reconsideration of her formidable career from 1929–72 and for a celebration of her legacy.

For more on Boulanger’s legacy and events related to her and her sister, Lili Boulanger, visit the Centre International Nadia et Lili Boulanger.

Boulanger’s Conservatoire Américain, housed in Fontainebleau, has since been rebranded as the European American Musical Alliance under the directorship of Dr. Philip Lasser.

For a list of Boulanger’s pupils and other important resources, see also nadiaboulanger.org.

Kimberly Francis is Associate Professor of Music at the University of Guelph, Canada.