What Was Adelina Patti Smoking?

One would assume that of all the leisure activities out there, smoking would probably rank among the least popular with opera stars. After all, today few singers in their right minds would touch tobacco and most vocalists will not even put up with secondary smoke coming within sniffing distance of their vocal cords. But back in the day, before the dangers of cigarette smoking had been identified, aggressive marketing campaigns by cigarette companies transformed smoking into a glamorous activity (see Allan M. Brandt, The Cigarette Century [2007]). Central to advertising campaigns by cigarette companies were celebrity endorsements, photographs of sports stars, film actors, and yes, even opera singers looking sultry and gorgeous, puffing on their favorite brands and saying nice things about them. One of the most striking ads features the recently deceased Risë Stevens (1913-2013): 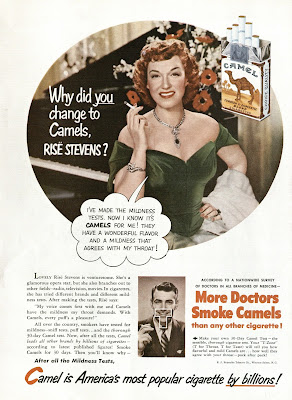 Adelina Patti (1843-1919) was of an earlier era. One of the most popular sopranos of the second half of the nineteenth century, Patti was among the first opera singers to lend her name and image to a variety of products. During her lifetime, she endorsed Kimball Pianos, Haines Brothers Piano-Fortes, Pears Soap, the Chicago Corset Company, Dr. Warren’s Wild Cherry and Sarsaparilla Troches (losenges), Palmer’s Perfume, Recamier Preparations (skin cream), and my personal favorite, Aspinall’s Neigeline, a skin treatment that, is “absolutely non-poisonous,” according to the full-page advertisement. 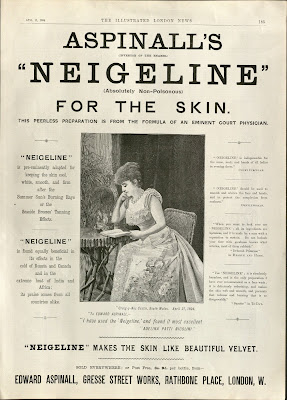 Patti was active prior to the time when cigarette companies had begun their aggressive advertising campaigns; nevertheless, her image was employed to sell tobacco products. As far as I can tell, her association with the tobacco industry was limited to one form of marketing: cigarette cards, small pieces of cardboard that were once used to strengthen flimsy paper packaging. Beginning around 1875, manufacturers transformed these items of necessity into advertising tools, printing the name of the cigarette brand prominently on the cards next to or above images of famous personalities; on the reverse side, interesting facts regarding the celebrities’ lives and careers sometimes appeared. These cards became collectors’ items, much like baseball cards, and it is possible to find examples featuring singers such as Jenny Lind, Mary Garden, Geraldine Farrar, Christine Nilsson, and many others. Patti’s image appears on at least five cigarette cards that I have been able to identify and there are undoubtedly more out there waiting to be discovered.

The card for Ogden’s Guinea Gold cigarettes is the simplest and the smallest measuring roughly one and a half inches wide and two inches tall, and featuring only a black-and-white image of the singer on the front with nothing on the reverse side: 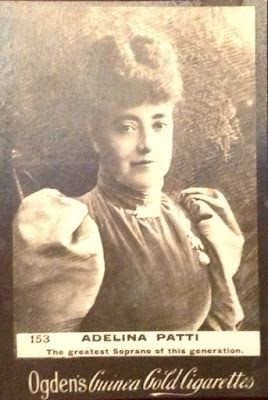 The other four I have found are much more colorful: 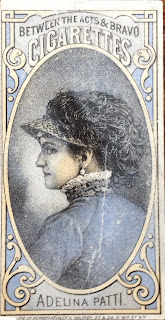 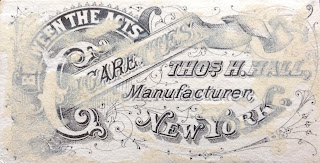 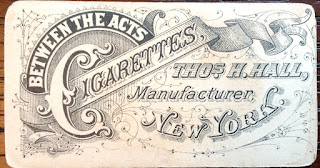 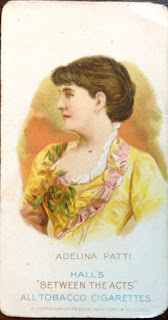 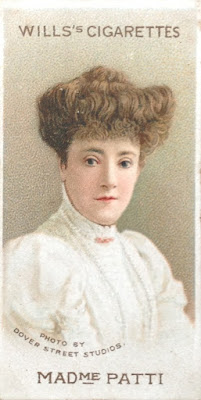 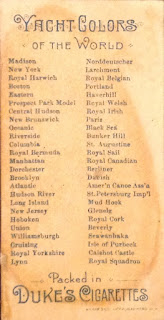 There is no evidence that Patti endorsed these cigarette companies in an official capacity or that she was ever remunerated for her images. It is possible, after all, that the manufacturers used her name and likeness without her permission. Indeed, the fact that some of the pictures bear only a slight resemblance to her suggests that she did not participate in the design of these documents. It is also uncertain whether she enjoyed smoking herself—maybe she did, maybe she didn’t. Regardless, it is fascinating that Patti played a role in the history of cigarette smoking, the images on these cards reminding us of a very different era.