A Magical Substance Flows Into Me: Recording the Limits of Public Musicology 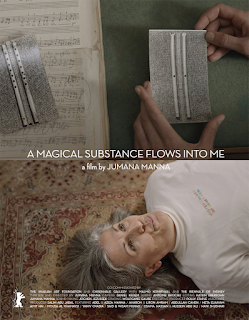 It isn’t often that musicology serves as a topic for feature-length films, but the artist Jumana Manna has turned her camera toward the research of Robert Lachmann in A Magical Substance Flows Into Me (66 min.; released September 2015 in the UK; not yet released in the US). The film is not a biopic but rather a documentary about the “double bind or dual potentiality of music”: its ability to affirm collective identity while excluding others. The title is a reference to a chapter in anthropologist Michael Taussig’s What Color is the Sacred? (2009), entitled “A Beautiful Blue Substance Flows into Me.” Manna finds the appropriation of Taussig’s visual metaphor compelling for the study of music, as she stated in a September 2015 interview:


Both color and sound move through time, and are similarly at once authentic and deceitful. They are mediums that connect to the vibratory quality of being, and mediums that encounter us, in a way that doesn’t always give us the possibility to control their entry into our bodies and our psyche.

The film opens with a crackling recording of Lachmann speaking at a December 1936 meeting of the Advisory Committee for the Palestine Broadcasting Service, established earlier that year by the British Mandate (the first transmission was on March 30). Over a blank screen, he delivers an indignant response to recent attacks to his musical programs by the local Hebrew and Arabic presses. At the end of the clip, he states, “I would ask you now to give me your most valuable advice as to possible changes in our programs and our method. It goes without saying that I cannot promise to accept your advice.” In fact, Lachmann would largely ignore his listening public’s feedback and persist in the broadcasting project according to his own mission to defy the onward march of modernity by salvaging oral traditions.

Lachmann (1892–1939) is an interesting case in the history of public (ethno)musicology, because—like Musicology Now—his research interfaced with the public using a relatively recent form of mass communication. While the blog may still be a relatively new medium, for Lachmann it was radio broadcasting that promised to offer new possibilities. After immigrating to Palestine in 1935 in flight from Nazi Germany, where he had been dismissed from his Music Librarian post at the Berlin Staatsbibliothek for being Jewish, he worked toward institutionalizing an Archive of Oriental Music at the Hebrew University, in a tale of academic intrigue and frustration dramatically chronicled by Ruth Katz in “The Lachmann Problem” (2003). When the PBS began broadcasting in 1936, Lachmann seized the opportunity to educate the European Jewish elites of Palestine in the music of its domestic Others, with an explicit agenda of creating political harmony between the region’s various constituencies. In his first lecture on November 18, 1936, he stated:


For the European, here [Palestine], it is of vital interest to know the mind of his Oriental neighbor; well, music and singing, as being the most spontaneous outcome of it, will be his surest guide provided he listens to it with sympathy instead of disdain.

His radio programs, running from November 1936 through April 1937, each featured a lecture on an Oriental musical tradition with performances by local musicians.

In her film, Jumana Manna travels around Jerusalem and other areas of Israel/Palestine to interview members of the ethnic communities with whom Lachmann worked in the 1930s. Some of the scenes begin with Manna reading from Lachmann’s handwritten lecture notes to reveal his Orientalizing rationale; this is coupled with footage of Manna’s own parents interacting with each other in their Jerusalem apartment—a metaphor for the conflicting ideological discourses about home and ownership in the region.

Manna embeds Lachmann’s scholarly project in the 21st-century political context by repatriating it in a manner that is paradoxically ephemeral yet newly archived by virtue of its capture on film: She uses her smart phone, a consistent prop throughout the film, to play the original broadcasted performances for her interview subjects. In a striking, unscripted moment, the voice turns out to belong the father of one of Manna’s Samaritan interview subjects—a father whom the woman is encountering for the first time through this recording. 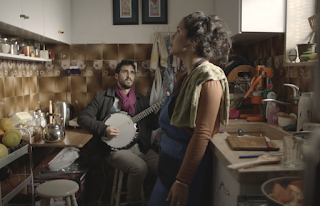 Perhaps the highlights of the film occur where Manna asks the musicians she interviews to perform for the camera. The Moroccan-Israeli singer Neta Elkayam, accompanied by Amit Hai on banjo (an untraditional choice of instrument that surely would make Lachmann turn in his grave), performs traditional songs in her kitchen while cooking a tagine and speaking about the burden of having to negate her Moroccan-Arab roots in order to assimilate to a Zionist ideal enforced through education and social pressures. “Home” for her grandmother was the “Morocco” inside the four walls of her Israeli house. The closing scene of the film features a group of Palestinian musicians playing a raucous dabke, “cAla dal’una,” a song also presented during Lachmann’s final radio lecture. As a love song meant for social dancing at a wedding, it serves as a powerfil affirmation of community, and in another beautiful unscripted moment, a blind elderly man enters the house to join in the dancing as if “the vibratory quality of being” and loss of control described by Manna could be instantiated with just a little music.

In her Director’s Statement, Manna refers to Lachmann’s project as a “failure,” because “his study of the Oriental Jews along-side Palestinians did not create a greater understanding between the concerned communities.” She frames the film as “the present giving advice to the past,” imploring the ghost of Lachmann to finally embrace “how the traditions are influencing and forming to one another.” Herein lies a potential crisis for public musicology: Are we responsible for solving the conflicts in which we work? Can our work even have small effects on politics, discourse, social relations, etc.? This line of questioning is not meant to be rhetorical or defeatist; as someone researching music in Israel/Palestine, these issues often crop up in my field interviews, interactions with colleagues, and even the writing process.

Although I have no illusions that my scholarship will “save the world,” I still think there is something to Manna’s critique that might bear out in methodological and representational considerations. Her film, according to the director’s statement, “renders visible the complex inter-dependency of identities that were falsely made discrete from one another” by the political ideology of pre-1948 Zionism. If it indeed accomplishes this goal, it does so by showing a series of intimate musical encounters that evince processes of exchange, or at least affinity, between communities that are often framed as enemies. To be sure, this isn’t a programmatic attempt to put musicians from clashing cultures in the same room, such as in the West-Eastern Divan Orchestra (discussed here and here by Rachel Beckles Willson), projects discussed in Benjamin Brinner’s recent monograph, or even the Silk Road Ensemble (which, as it happens, is the subject of its own upcoming documentary film). Instead, Manna’s work allows the private sphere of musical experience to displace the public rhetoric of the Israeli-Palestinian conflict—at least during the moment of viewing—and allows the people living through it to have the strongest voice. The “magical substance” of music becomes not so much a romanticization of its “healing” powers but rather a profound recognition that conflict is something felt, experienced, and performed. Perhaps this is the wisdom Manna offers not only to Lachmann, but to those of us practicing musicology in the present; herein lies not a limit to but rather an affirmation of the potential and value of our work—the work we specifically are equipped to do—to both the public and the humanities at-large.

Michael A. Figueroa is Assistant Professor of Music at the University of North Carolina at Chapel Hill, where he teaches Middle Eastern and African American music. His current book project focuses on music and territorial conflict in Jerusalem and greater Israel/Palestine.

For more information on the film: Official Web Site: http://www.jumanamanna.com/

Jumana Manna is a Palestinian artist working primarily with film and sculpture. Her work explores how power is articulated through relationships, often focusing on the body and materiality in relation to narratives of nationalism, and histories of place. Manna received a BFA from the National Academy of Arts in Oslo (KHiO), and an MA in Aesthetics and Politics from California Institute of the Arts. In 2012, she was awarded the A.M. Qattan Foundation’s Young Palestinian Artist Award (first prize). She has participated in various international exhibitions, biennials and film festivals.