Introducing Cherubino's Leap: In Search of the Enlightenment Moment (University of Chicago Press, 2016)


Let me begin with the title. The first part (before the colon) is meant as a provocation. Who doesn’t want to read about Cherubino, this mercurial adolescent, caught between the sexes (in more ways than one), between servant and noble mistress, and in the midst of his own search for self-awareness? His charm and wit and, most memorably, his throbbing music cast their spell over a work that in some sense defines the Enlightenment temperament. Cherubino himself doesn’t materialize until the penultimate chapter of my book, but often in the long course of writing, I felt his presence, imagining that I’d caught glimpses of him, behind and between the scenes, waiting for his moment. 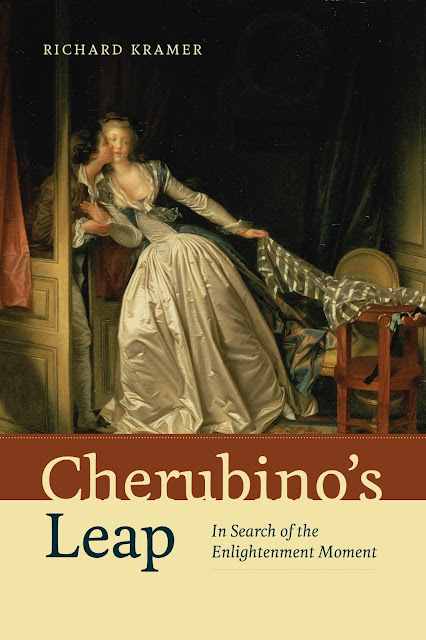 And there’s that final Moment in my title. The Germans have a word that makes it come alive: Augenblick, the blink of an eye, we would say, in which everything happens, even as the blink obscures the view. Blick, however, suggests something quite different: the gaze that seems to stop time altogether. “Ein Augenblick ist wenig . . . ein Blick ist viel,” sings Zerbinetta, in a luscious phrase in the Vorspiel to Ariadne auf Naxos, playing upon the seeming paradox contained in the word itself. The moment that I have in mind, erotic in a different way, is contained in the few bars of intensely chromatic music, toward the end of the duettino with Susanna, that seems to pierce the beating heart of this Cherubino who is about to vanish from view. There are many such moments in the iconic works studied in this book, subtle moments that, by their nature, do not announce themselves, do not pound the table for attention. These are the prismatic moments that seem to contain within themselves the essence of the work, not in any overarching thematic sense, but as problems to be examined--not solved, but explored and pondered, not least as symptoms of a cast of mind that embodies Enlightenment sensibility.

And then there’s that other word in my title: Enlightenment. The nine chapters in this book are each engaged in a search of some kind, seeking to locate that moment that captures the spontaneity and wit of the Enlightenment mind. From Moses Mendelssohn’s focus on the moment of surprise at the heart of the work of art to Herder’s imagining of the seismic moment at which language was discovered, it is the flash of recognition that nails the essence of the work. The searching, in these nine chapters, is something of an adventure, and it was my modest wish to bring to the reading of the book that spirit of fresh discovery.

The chapters proceed from the “chromatic” moment--the single tone that disturbs the thrust of a diatonic musical discourse--and its deployment in several seminal instrumental works by Carl Philipp Emanuel Bach, Haydn and Mozart (and in a precocious modulatory exercise by the young Beethoven); and on to the poetic moment, taking the odes of Klopstock, in their finely wrought prosody, as a challenge to the problem of strophic song, a challenge met in very different ways by Christian Gottlob Neefe, Gluck, Emanuel Bach and, in his sketchbooks only, Beethoven; and finally to the grand stage of opera: at the intense moment of recognition in Gluck’s Iphigénie en Tauride; and to those few exquisitely introverted bars of music that complicate Cherubino’s daring moment of escape in Mozart’s Le nozze di Figaro. And in a final chapter, the tears of the disconsolate Konstanze in Mozart’s Die Entführung aus dem Serail provoke a reflection on the tragic aspect of Mozart’s operatic women.

In the course of our journey, we are joined by some of those very grand figures from literature and the arts from whose work we are induced to theorize a language of Enlightenment discourse: Diderot, Lessing, Moses Mendelssohn, Herder, Goethe and Angelika Kauffmann among them–and Fragonard, whose coy “Stolen Kiss” (as it is called) graces the cover of this book and is therefore implicated in its title. The date of Fragonard’s remarkable oil is sometimes given as 1786, the year of Figaro, and it does not take much imagination to conjure Cherubino slyly stealing that kiss.

One final aspect of my title deserves a word here. What can I have meant by “Enlightenment Moment”? In some sense, the book itself is an attempt to come to grips with this slippery notion, to identify traces of it in these disparate works, and even to wonder whether what we are experiencing in these telling moments is an essence of mind that may help us to grasp however tenuously the foundational thought of at least one corner of the European Enlightenment.

Richard Kramer, distinguished professor emeritus at the Graduate Center of the City University of New York, is the author of the award-winning Distant Cycles: Schubert and the Conceiving of Song (1994; University of Chicago Press) and Unfinished Music (2008, 2012; Oxford University Press). Kramer was elected to the American Academy of Arts and Sciences in 2001. He has served as vice president of the American Musicological Society, and as editor-in-chief of its Journal.