Thoughts on "The Thought of Music" 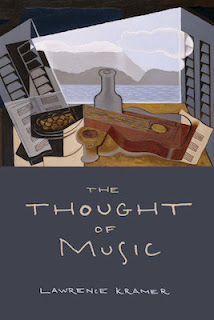 The Thought of Music (2016) is the third volume in a trilogy of books on musical understanding that began with Interpreting Music (2010) and continued with Expression and Truth: On the Music of Knowledge (2012), all published by University of California Press.  The title of the new volume refers both to thought about music and to the thought embedded within music in all of music’s many dimensions: composition, performance, listening, usage, adaptation, recollection, remediation—the list goes on.  The first sense of the title alludes to the series of transformations in musical understanding that began with the cultural turn of the 1990s and has continued with more recent investigations of performance, affect, and embodiment.  The second sense reflects my conviction that music, as well as being a source of pleasure and community, is also, and fundamentally, one of the primary means by which we make sense of the world.

One source of that conviction is unapologetically personal.  I cannot separate my experience of music—for me, classical music, but any music qualifies—from the texture and sense of experience in the round, and from the understanding I take away from that experience both in everyday life and at the removes of reflection and writing.  Partly, perhaps, because I also compose, I habitually think in music.  But the stakes of the thought of music run deeper yet, and those are the stakes that this book and its predecessors are most concerned to address.

The conceptual transformations I referred to earlier have established that musical understanding can be enhanced by conceptions from elsewhere, ideas drawn from the broad spectrum of humanistic thought—which, once brought to bear on musical topics, reveal that they were not really from “elsewhere” at all.  There is no elsewhere; music is everywhere.  But to say so, though it is certainly to say much, and more than it had been customary to say for much of the previous century, is not enough.  Music, I want to say, with all the many senses of the term in mind, is a form of thinking, sometimes of thinking through feeling or sensation, but sometimes just of thinking in itself.  This does not mean, emphatically not, that by regarding music in this way we banish its immediacy and render it abstract or abstracted.  We should know by now that thinking is embedded and embodied, sometimes sensuous, even erotic.  Thinking, too, is everywhere: in material as well as conceptual venues, in practice as well as reflection, in perception as well as memory.  And as a form of thinking, music has the capacity to contribute to, not just to mirror, the enterprise of humanist thought in general, the creatively inflected knowledge of what we make and do.

More still, because of the familiar uncertainties that attend any knowledge of music not conveyed with a “strictly” musical vocabulary (which is really no more certain, nor more strict, than other kinds), musical understanding is the best available paradigm for humanistic understanding.  Music has epistemological weight as well as ontological depth.  The Thought of Music and its companions, and my earlier work, too, though perhaps less explicitly, aim to show how that marriage of dimensions works and why it matters that it should.

In the process, the book aims to show how the cultural and hermeneutic orientation that characterized the first series of recent conceptual transformations can productively be coordinated with the subsequent interests in affect, performance, and embodiment.  Lines of argument that put these orientations at odds with each other miss the point of both.  Such one-sided thinking is too committed to the magic of the elsewhere, the lure of a beyond that is essentially a metaphysical sublime even if it goes by other names.  But it is one thing to say that the multiple dimensions of musical experience work with one another more than they work against one another (saying it is easy), and quite another thing to theorize how and show why they work.  The Thought of Music tries to do both, whether its concern is with how people behave when they unexpectedly encounter pianos on the street, or with how virtuosity in the nineteenth century became a form of authorship, or with what it really means to claim that music is ineffable (it’s not what we usually suppose), or with how performance becomes conceptual and embodiment links music to cultural practice—and vice versa.

These issues are especially timely in my view because the status of humanistic understanding is at serious risk nowadays.  Genuine advances in certain areas, including information technology and cognitive science, have too often fed the resurgence of an empiricism that wants to be more than “just” empirical, as if being empirical were somehow not robust enough.  As Willard van Orman Quine reminded us long ago, empiricism has its dogmas, and the ascendant neo-empiricism aspires to the condition of dogma.  The task of the modern humanities has long included providing a counterweight to such scientism.  Not, I should add at once, to science: the old “two cultures” idea of C. P. Snow is probably good and dead, thanks in part to the work of thinkers such as Bruno Latour, who have shown that the borders separating scientific and humanistic thought have been much exaggerated, and that no arena of thought can escape either sociocultural influence or the need for invention, imagination, and speculation—guesswork at its best.  Fully reckoning with this realization is hard to do, and we are all still working on it.

But Latour, like so many of the thinkers whose work can readily combine with the thought of music, pays music no mind.  (Some of the others who do, Slavoj Žižek, for example, tend to annex cliché rather than to read up-to-date musicology.)  This lack of enterprise, which masks itself as lack of expertise, suggests a need to extend to the academic community at large the work of the public musicology that has become so important of late.  The Thought of Music seeks to show what might follow if we do mind the music.  The ultimate goal of the book, and of the trilogy, is to exemplify what the thought of music can do both for musical understanding narrowly conceived, and for a more inclusive humanistic understanding that is robust in part precisely because part of it is musical.

Lawrence Kramer is Distinguished Professor of English and Music at Fordham University, editor (since 1992) of 19th-Century Music, and a prizewinning composer whose works have been performed on three continents. He is the author of twelve books on music, most recently including Interpreting Music (University of California Press, 2010), and Expression and Truth: On the Music of Knowledge (California, 2012), and The Thought of Music (California, 2016).  His work has been translated into ten languages and been the subject of conferences and session meetings of scholarly societies in the Americas, Europe, and China. A retrospective collection selected from over a hundred published articles, Song Acts: Writings on Words and Music will be brought out by Brill Academic Publishers (Leiden and Boston) in spring, 2017.  Mosaics, his String Quartet no. 7, premiered in New York in December (2016) and a cycle of six songs for mezzo and piano to poems by Emily Dickinson will follow in April.