Book Preview: Music After the Fall: Modern Composition and Culture Since 1989 (University of California Press, 2017). 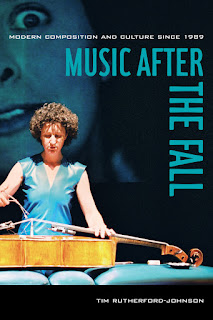 When describing my new book Music after the Fall: Modern Composition since 1989 to people, I’ve been surprised how often I’ve been asked, “Why 1989?” To me it seems obvious, and was a part of the book’s conception from a very early stage. Perhaps it’s an age thing: I remember my mother sitting me in front of news of the Berlin Wall coming down and her telling me “you’ll want to tell your grandchildren about this.”

A more rigorous justification would begin with the fact that I had become frustrated with the available texts on late 20th-century music. What books there are usually take 1945 as their starting point. That story has been told enough times, with expeditious changes of emphasis along the way, to be familiar: at the end of the Second World War, Europe, the home of post-Enlightenment Western culture was devastated and in desperate need of reconstruction. The financial power America had promised since the 1920s was finally achieved, initiating its dominance over the second half of the century. And the postwar settlements with Soviet Russia had set the stage for the Cold War that was to come. New technologies and sciences, many of them developed in wartime, such as tape recording and information theory, were finding wide peacetime application; and the postwar industrial boom – as well as the increasing importance of cultural soft power as a Cold War weapon – began to fuel a rise in the public’s consumption of the arts.

As a place to begin, or at least to reboot, 1945 makes sense. It helps us understand how and why the musical innovations of the postwar decades came about, from musique concrète to minimalism, from Etude aux chemins de fer to Different Trains. However, by the end of the century this narrative begins to unravel. Many of the precepts on which the post-45 narrative is based were no longer applicable by the start of the 21st century: Europe had been rebuilt and, as the European Union, had become one of the world’s largest economies. The fall of the Berlin Wall and the subsequent collapse of the Soviet Union had brought an end to the bi-polar Cold War world. Even the United States’ claim to global dominance had begun to be threatened after China’s opening to the global trading market at the end of the 1970s, the terrorist attacks of 9/11 and the wars in Afghanistan and Iraq that followed, and the global financial crisis of 2008. The social democratic consensus that had steered the West through postwar reconstruction had been replaced by market-led neoliberalism. Finally, the birth of the Internet and World Wide Web in the early 1990s, as well as the widespread use of digital technologies, had utterly transformed the production and consumption of culture.

Music after the Fall therefore concentrates on a new set of global themes that I felt defined the post-89 era and which themselves might have shaped the music that was and is being made. I came up with six of them: social liberalization, globalization, digitization, the Internet, late capitalist economics, and the green movement. Other themes might be suggested but during the book’s gestation these six proved broad enough to encompass most aspects of contemporary life. In the book itself, I choose not to use them as chapter headings but go one level further into abstraction, extrapolating a set of quasi-psychological states that have their origins in these themes and that seem to preoccupy late 20th-century and 21st-century music and art. These I call permission, fluidity, mobility, superabundance, loss and afterness. These don’t map exactly onto my six themes but, like the music itself, intersect with them in various ways.

In practice, this means that I can consider the work of, for example, the Silk Road Ensemble as an expression of mobility, of the worldwide flow of ideas and people. But since my guiding framework is thematic rather than stylistic or aesthetic, I can also write about their work alongside that of the Korean composer Unsuk Chin or the Lebanese musician Tarek Atoui, the music of all three representing different ways of dealing with cultural globalization. In another chapter Laurence Crane and Diamanda Galás might appear in unexpected proximity, both of them expressing different forms of permission in their music (tonality and noise, respectively). Galás herself reappears alongside another unexpected companion, John Corigliano, in the chapter on loss, which compares their respective responses to the AIDS crisis of the late 1980s. And so the links continue: Galás’s vocal style and Atoui’s microsonic montages might both also be heard as different forms of superabundance, and thus also reverberate within a chapter that includes John Oswald’s annihilating plunderphonics and the extrahuman prosthetics of Laetitia Sonami and Pamela Z. The musical world I’ve endeavored to represent is one that is unconstrained by the traditional boundaries of style, form and technique, but which can nevertheless be read and interpreted through a different set of prisms.

Predictions for the future are likely to be undone as quickly as they can be made. This is the fate of those of us who write about recent history. As my book enters the world, I’ve been minded to reflect that perhaps it has unwittingly captured an era of its own. As the European Union appears on the brink of breaking up, as the United States enters a new and possibly transformative phase in its relationship to the world, as economic and political power shifts towards Russia and China, and as the Net falls increasingly prey to malevolent and corporate actors, it is hard to shake the feeling that much that defined the post-89 era no longer applies, just as much that defined the post-45 era came to its own end. Before long someone, perhaps right now watching the news with their mother, may even want to write a new music history that begins from today.

Tim Rutherford-Johnson is author of Music after the Fall: Modern Composition and Culture since 1989 (University of California Press). He edited the most recent edition of the Oxford Dictionary of Music, and blogs about contemporary music at johnsonsrambler.wordpress.com.
(Author photo: Anton Lukoszevieze)