Dissertation Digest: The Flute in Musical Life in Eighteenth-Century Scotland by Elizabeth Ford

[Ed. Note: This "Dissertation Digest" is the first in an ongoing series aimed at drawing wider attention to in-progress and recently completed dissertations in musicology.  Drafts of posts as well as inquiries are welcome at musicology-now@ams-net.org.] I became interested in the history of the flute in Scotland as a masters student and beginning traverso player at the Peabody Conservatory.  While looking for eighteenth-century flute music that didn’t make me cry when I tried to play it as I got used to a very different and very difficult instrument, I discovered a modern edition of something called The Airs for the Seasons by James Oswald, edited by Jeremy Barlow.  Not only was the music very satisfyingly playable, it helped keep me from giving on baroque flute entirely.  I began using Oswald as a warm-up for practicing Hotteterre and Philidor in flat keys in French violin clef, and he really was good for morale.  I didn’t cry nearly as much.

Several years later, during a break from academia while still deciding what to do with my life, I rediscovered Oswald.  I was reminded of the effortless quality of the and how it manages to combine an Italianate structure with characteristic Scottish sounds.  At the time I was listening to a great deal of Scottish and Irish music, as well as Appalachian old-time music, and Oswald seemed to fit right in with that overall aesthetic.

While there seemed to have been many collections of music for the flute from eighteenth-century Scotland, all the literature on the flute in Scotland said the same thing: the flute was unknown prior to 1725.  This struck me as improbable; the flute was one of the most popular, flashiest instruments in eighteenth century Europe and Scotland, while geographically remote, produced some of best-known writers and thinkers of the time.  Why would the Scots lag behind in flute playing?  It also struck me as odd that while most Irish bands have flute players and there are hundreds of books of Irish tunes for flute, Scottish bands (usually) lack flutes and there are practically no modern books of Scottish tunes for flute.

I decided to pursue this mystery by contacting David McGuinness and John Butt at the University of Glasgow.  And in the spirit of candor, I was a bit of a fangirl of both their recordings and I was afraid to write them, but I’m glad I did.  Both agreed that it was a Ph.D.-worthy inquiry and made suggestions for my initial application abstract. A few months later I moved to Scotland.

As I began my research, I found much that I expected: most research on Scottish music was centered on the fiddle, the bagpipes, Robert Burns, or Gaelic song, with the flute more or less relegated to a footnote saying that it was unknown prior to 1725.  I tracked the 1725 date to an essay by the antiquarian William Tytler that was written in 1792 about a St Cecilia’s Day concert in the late seventeenth century.  There was no other basis for the claim, and yet historians clung to it.  I decided one of my major tasks was to verify or disprove it.

As I worked, in archives, attics, basements, libraries and country houses, I realized my task was larger than disproving a date.  As much as Tytler’s claim annoyed me, it wasn’t just him and his date.  It was the whole notion that the flute wasn’t/isn’t a Scottish instrument that I was rapidly discovering was part of the cultural ethos of Scottish music, as rapidly as I was discovering that historically the flute was very much a part of music in Scotland.

I had already recognized that the idea of Scottishness in music took very particular forms, and that the flute just didn’t fit, perhaps because of the association with Irish music, or an association with gentility.  Although I do not play in a traditional idiom, many Scottish flute players I met told me that they have to play Irish music because there is no flute music from Scotland because the flute “isn’t Scottish enough.” I wanted to scream, but it is!  It is Scottish!  Scotland has a rich and varied history of flute playing.  There are hundreds of books from the early eighteenth-century onwards of Scottish tunes for violin or flute with specific flute versions!  Sonatas!  Difficult, challenging, flute sonatas!  Manuscripts!  Lots of repertoire, and history, and evidence, and no one aware of it but me and maybe six other people.  I began to evangelize.

So, here is everything, in no particular order, that you need to know about the flute in eighteenth-century Scotland and why it might be important to your non-Scottish music oriented lives: The flute was a major status symbol among amateur musicians, mostly men, but also ladies.  At least three gentlewomen played flute, and one of them received a flute with a rather racy love poem hidden inside it.  Scotland was not a cultural backwater, even considering the implications of the Act of Union (1707) and the last Jacobite rebellion (1745).  There is, however, evidence for a sense of nostalgia post-1745 with an increase in publication of Scottish tunes.  The flute, called the German flute, may have had political associations with the English (Hanoverian) court.  General John Reid was the best-known Scottish flute player, and when he wasn’t fighting Jacobites or defending Fort Duquesne from the French, he was composing sonatas and giving recitals that sent the ladies for their smelling salts.  James Oswald wrote flute sonatas too!  William McGibbon wrote the first sonatas for flute in Scotland.  One of them, 1729 number 6, is a reworking of a violin concerto set for German flute and violin.  There is little evidence for the flute in the Highlands, but then, I’m hampered by poor Gaelic.  There is, however, a great deal of evidence for overlap between flute playing and bagpipe playing in the Lowlands in terms of instruments and repertoire.  The earliest eighteenth-century mention of a flute from a Scottish source is a friend of the Marquis of Montrose in 1703.  The first English translation of Hotteterre was by a Scot, Mr. Urquhart, in 1726.  He was also a flute maker.  The earliest manuscript evidence of the flute in Scotland is Alexander Bruce’s manuscript, in the collection of Lord Balfour of Burleigh, from 1717.  It contains the second part to flute duets by Valentine, and much more interestingly, a fingering chart for German flute going to the B-flat five ledger lines above the staff.  The highest note on the one-keyed flute is the A just below that.  Hotteterre said it was best not to play above the E three lines above because it was in bad taste.  Tytler’s 1725 date is, as they say here, utter bollocks…but he did play flute.  Also, knowing the flute’s role in musical life in eighteenth-century Scotland gives us a better understanding of the history of the flute and the history of music in Scotland. 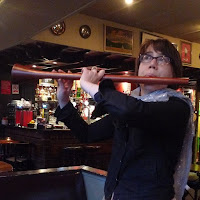 Elizabeth Ford has a Ph.D. in music from the University of Glasgow (2016) and her dissertation won the National Flute Association Graduate Research Competition.  Her work looks at the history of the flute in Scotland, Scottishness, performance practice, and pedagogical history.  Her edition of William McGibbon’s complete sonatas has been accepted for publication by A-R Editions.  She is the English language editor for Schott Music’s online texts, and co-research assistant on the Royal Society of Edinburgh-funded Eighteenth-century Arts Education Research Network (EAERN).  She was recently awarded a fellowship from the Handel Institute to work on an edition of the flute compositions of James Oswald. The picture shows her in a pub with a reproduction of the unique bell-ended flute from the ceiling of Crathes Castle, Aberdeenshire, c. 1599.  She likes to call it The Blunderbus.