As an ardent fan of Lynch's oeuvre, I have trained myself to relax my critical faculties when watching his films. I prefer to simply surrender to the fantasy, to let the work act on me according to the oneiric terms the creator himself endorses. But music-theoretical habits die hard, and midway through Part 8, my ears perked up when something surprising began piping over the soundtrack: pantriadic chromaticism, the use of simple triads in unconventional progressions and routines, outside the bounds of natural, ‘rational’ tonal syntax.

Pantriadic harmony can seem phantasmagoric, as though steered by its own arcane will, rather than by human hands. Richard Cohn (2012, x) notes its affiliation with “altered and heightened” realities. It is a style tailor-suited for uncanny affects, its basis in familiar sonorities lending it that critical element of familiarity necessary for something to feel truly unsettling.  This harmonic idiom is extremely rare in the Twin Peaks soundworld, and in most forms of commercial and popular music more general. However, it is positively rife in original film and television music, where it often connotes the fantastic, the dreamlike, and the sublime.

What was doubly ear-catching to me was the fact that, rather than being incorporated into non-diegetic underscore as is typical for cinematic pantriadicism, this music was issuing from an on-screen source...

We find ourselves in an ornately appointed parlour, one room within an immense tower situated somewhere in an endless mauve sea. Music can be heard coming from a vintage phonograph player, its exact melodic contours garbled and clouded in mechanical noise. An elegantly dressed woman--"Senorita Dido," according to the end credits--sits motionlessly on a couch, listening intently to the partially-occluded jazz vamp. A large bell-like structure begins sounding an ominous knell, which seems to draw forth the Fireman (identified, with quintessential Lynchian obscurity, as “???????” in the credits). After some slow inspection, he somehow shuts off the mysterious device. The phonograph continues playing. Throughout, no dialogue is uttered, and the scene lasts three and a half minutes.

Senorita Dido's phonograph appears to be some hybrid of industrial ambient music and slinky 1930s instrumental jazz. The record cycles repeated through a glacially paced chordal succession with basically no functional or teleological foundation.[2] The diagram below charts the tonal progress of this cue, if progress is the right word. The music cycles through four "passes" of comparable progressions, beginning with fifth-based transpositions of the initial vamping module, but eventually migrating to more chromatic realms, through functionally unassimilable moves like that between B-flat minor and G-minor. The progression covers a great deal of ground, but never goes anywhere, kind of like the harmonic equivalent to a barber-shop pole illusion.[1] 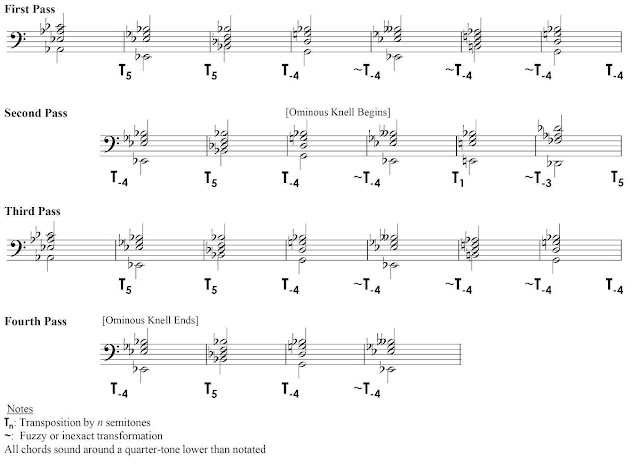 The primary effect of the music here is dislocation. The cue has enough trappings of familiar jazz to evoke standard generic associations concerning time-period, sexuality, cosmopolitanism, nostalgia, and so forth. But its aimless, looping pantriadic structure works to contradict—or at least confuse—the clean cinematic connotations of jazz, rendering cryptic what is normally semiotically clear, surreal what is often filmically coded as "realistic." The uncanny implication being, of course, that Senorita Dido has been listening to these nine chords repeat for basically all eternity; the purposeless repetition goes beyond mere minimalistic semantic saturation, verging on the horror of eternal recurrence.

Lynch is an accomplished sound-designer and a talented musician in his own right, but the carefully orchestrated jazz of this cue did not strike me as bearing his specific creative fingerprint. In fact, the pantriadic strains that haunt Dido's parlour are the result of a long chain of musical "repurposings." The cue as it is identified in the episode's credits, "Slow 30s Room," was imported from an album co-composed by Lynch and his frequent collaborator, Dean Hurley: "The Air is on Fire." When taken as a stand-alone listen, "Fire" consists of a continuous industrial ambient soundscape, of which this mutated jazz is only a small part, a tiny concession to triadic harmony near the end of its otherwise thoroughly atonal runtime.

That album, in turn, was assembled from the music Lynch and Hurley composed for an exhibition of the director's visual art in 2007 at the Fondation Cartier pour l’art contemporain in Paris. Just as in Twin Peaks, the music's purpose was ambient and textural, intended to fill an oddly-appointed physical space, to be explored at a languid pace, with equally unusual sound.

The question remains—since neither Lynch nor Hurley is a jazz-band arranger, where did this music come from originally? The answer lies in a now obscure technology: the Optigan, a fascinating hybrid juke-box/musical instrument created by the Mattel Corporation during a short window in the early 1970s. The Optigan was a marketed as a miniature dance-band for your living-room, its various functionalities evident in this commercial starring TV-dad Carl Betz.

The instrument required proprietary optical soundtrack discs, on which a variety of prerecorded instrument sounds, loops, and vamps could be played back at the press of a key. In addition to a standard organ keyboard, the Optigan included a set of 21 buttons for chord-loops--divided into 7 major, minor, and diminished triads respectively. A given Optigan disc was oriented around a specific musical style or mood, with pre-recorded samples ranging across genres from the "Country Sunshine" to "Latin Fever" to "Bluegrass Banjo"—nothing cutting-edge, stylistically, but music with a certain square, bourgeois charm nevertheless. 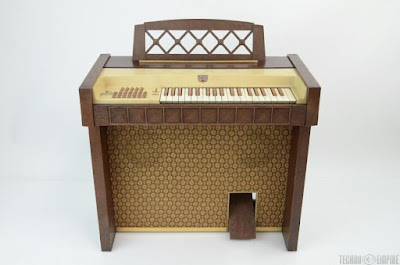 The Optigan never seems to have been more than a mid-century domestic novelty.[3] Though the sound-quality was far from crisp, and the electronics were prone to technological malfunctions, it was ahead of its time in numerous respects, predating comparable looping and sampling functions of home-synthesizers by a decade. The kitschy obsolescence of this instrument must have tickled Lynch in just the right way. One could imagine one buzzing away in the background of Dean Stockwell's suburban drug den in Blue Velvet, the instrument of choice of a twisted pater-familias, left chugging so that “there’s always music in the air.”

The particular disc Lynch and Hurley turned to for Dido's parlor is called "Big Band Beat." A quick listen to the various sounds of that proto-sample library (usefully demonstrated here on YouTube) reveals that the nine distinct chords of "Slow 30s Room" correspond to nine right-hand instrumental vamps from the Optigan. These chords are ordered seemingly ad-libitum, and with thick layers of electronic distortion and filtration applied long (long!) after the fact.[4]

Despite his reputation for inscrutability, Lynch is not a purveyor of the 'weird' for its own sake. Rather, his primary modus is to peel away the membrane of the "normal," so as to reveal the strangeness that lurked underneath all along, squirming and hungry. The number of layers being peeled away in this cue is remarkable, and characteristic of the depth of Lynch's work. By the time the big-band Optigan loop makes it to Twin Peaks: The Return, it is a sample-of-a-sample-of-a-sample, each stage further degrading the original meaning (and recording fidelity!) of the loungy jazz that served as its source. Between the meandering chromaticism, the cryptic generic allusions, and the basis in a material object only dimly remembered by most listeners, this strange Optigan ambiance is a perfect embodiment of the Lynchian aesthetic.

***
[1] Some of the material in this analysis is adapted from my forthcoming book, Hollywood Harmony (OUP, 2018).
[2] Note similar aesthetics of inexplicable looping at play in Sarah Palmer’s living room in Episode 13.
[3] And, if for any reason you’d like to reconstruct Lynch’s creative process with your own fingers, a virtual Optigan has just been released this week for iOS. The app even comes with the “Big Band Beat” proto-sample-library for free.
[4] For the curious, here's what "Big Band Beat" could sound like when performed as intended, to support a more traditionally structured piece of jazzy music, here played by Mattel's leading proponent of the instrument, Johnny Largo.
***

Frank Lehman is an Assistant Professor of Music Theory at Tufts University. His work on chromaticism in film music will appear in a forthcoming monograph with Oxford University Press. Website HERE