An Introduction to Fernando Ortiz on Music

In conjunction with David Font-Navarrete, David Garcia, Susan Thomas, and others, I have recently been involved in the translation of selected writings by Fernando Ortiz. The resulting book (Fernando Ortiz on Music) will appear in February, 2018 from Temple University Press. Work on the project raised many issues about the purposes of translation, the intended audiences for translation, the semantics of translation,  and the appropriate framing of translation in terms of background information, among others. I discuss a few of those issues with you as part of my post, as do the others that follow. 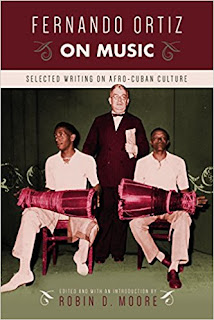 The cover image of the book reproduces a photograph of Fernando Ortiz alongside batá drummers Pablo Roche (center) and Aguedo Morales (left). It was taken on May 30, 1937 as part of the first-ever public lecture and demonstration of Afro-Cuban religious drumming and dance entitled “The Sacred Music of Black Yorubas in Cuba.” As reflected in the visual composition of the photograph that places Ortiz at the center, he dominated these presentations; his academic voice directed all activity and mediated between the Afro-Cuban religious community and the predominantly white middle class. 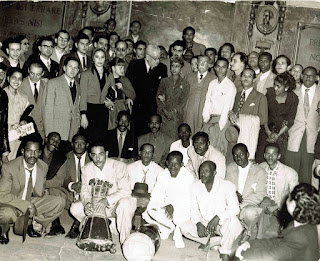 Here is another photograph of Ortiz from the mid-1950s in the Aula Magna of the University of Havana. It gives a feeling for the many communities and spheres of interest Ortiz engaged with during his career. The photo depicts Ortiz (center, in a black suit) with his collaborators and admirers. To his right stands Afro-Cuban religious devotee and singer Merceditas Valdés, and next to her Dr. Clemente Inclán, Rector of the University of Havana for many years. To Ortiz’s left stands his youngest daughter, María Fernanda Ortiz, and to her left world-renowned ballet dancer Alicia Alonso. Behind Inclán and to the right in the back row stands modernist painter Wifredo Lam. In the front row (third from left) with the large iyá drum sits Raúl Díaz, a key Ortiz informant. To his immediate left is another percussionist he worked with frequently, Giraldo Rodríguez; drummer Pablo Roche is in the second row fourth from the right, in a white shirt. Through his work and public scholarship, Ortiz clearly hoped to bridge the divisions of a racially stratified society, and engaged with academics, artists, and performers of many sorts.

Perhaps the most fundamental question that arose as we initiated this project was how to justify translating the work of a white, privileged scholar and his frequently dated views on black heritage in the present day. I would argue that if one is interested in music of the African diaspora in any country, it is hard to justify a lack of familiarity with Fernando Ortiz and his scholarship. Ortiz essentially created the field of Afro-Caribbean studies and helped establish a foundation for Afrodiasporic studies more generally. Virtually everyone else interested in these topics — Roger Bastide, Harold Courlander, Melville Herskovits, Alfred Métraux, Pierre Verger, etc. — began their studies significantly later than Ortiz and in dialogue with his work. In the Caribbean and beyond, he mentored generations of researchers. Beyond this, he was one of the first authors to focus on varied forms of cultural transformation in post-colonial, post-slave societies, famously championing the notion of “transculturation.” Perhaps most significantly, Ortiz’s changing views through the years correspond to the trajectory of modern Western thought as regards Africa and race. He began his academic career as an evolutionist thinker heavily biased against Afro-descendant expression and ended up being considered one of its first advocates. I view one of the principal contributions of the introduction to the volume as documenting his conceptual shifts in this sense and contextualizing his views within a broader historical framework, as can be seen in the Table of Contents, below. 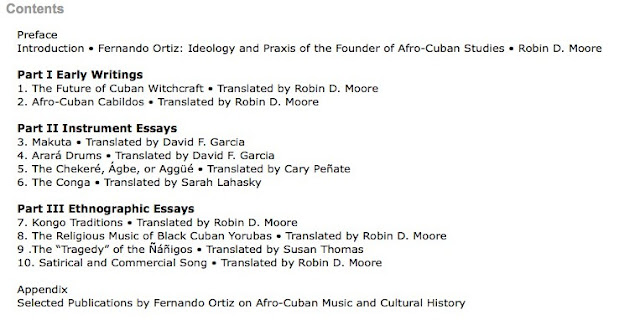 Those of us involved in the translation project struggled with what representative works of Ortiz to reproduce, on what topics, and from what periods of his life. The decisions ultimately involved reflection on which texts would be useful to English-speaking readers today. Ortiz was extremely prolific; his writing on African-influenced music, dance, and expressive culture alone (as he wrote on countless other topics) would fill at least a dozen 600-page books. Late works are less ideologically fraught, but the early ones provide important insights into his intellectual development. In the end we decided to include one essay from Ortiz’s early “criminology” phase (decidedly racist), one from the early 1920s, and the remainder from the 1940s and 1950s, the apex of his career. A number of works would have been included but for lack of space: on the history of the timbales, the history of the claves, on carnival traditions, essays on iyesá drumming, tumba francesa, yuka, bembé music and dance, Abakuá instruments, and others like the bongó, etc. Certainly many translations projects of Ortiz’s writings could yet be undertaken.

Those interested in Afro-Cuban and Afro-Caribbean music will undoubtedly find important material to study in the volume. But we also hope that students and scholars of more varied research specializations whose languages do not typically include Spanish — for instance those in fields such as in African studies, African American studies, dance, diaspora studies, folklore, subaltern studies —may be interested in Ortiz’s writings as well. Those drawn to the history of anthropology may also find the writings useful, given that they provide information about early ethnographic endeavors by scholars based in locations other than the United States and Europe. Ortiz’s work decenters existing anthropological histories and provides alternate perspectives from the developing world.

As mentioned, the introduction to the book explores Ortiz’s changing views toward Afro-diasporic heritage, when such changes took place, to what degree, and why. The significant shifts in his views on the topic are especially evident in the mid-1930s. Ortiz became a much more outspoken advocate of black heritage and its study at that time, though a substantial degree of ambivalence towards it can still be found subsequently. One issue complicating a discussion about his changing views is that Ortiz never admitted to the overtly racist presumptions in his early publications. Another is that his most controversial statements often come in the form of the citations of publications by others, without comment. I reference only one of Ortiz best-known works from the 1950s here in order to represent his late views.

It is clear that Ortiz was aware of arguments against evolutionist theories of culture as of the 1940s. At one point he states “I am not unaware that studies and analysis of the music of ‘our historical contemporaries’ must be undertaken with caution. So-called ‘primitive’ cultures cannot necessarily be considered antecedents of other more civilized ones that could be viewed as chronologically ‘secondary’ or ‘subsequent.’”<1> Here he makes a statement against evolutionist thought, yet also describes white/European culture as “more civilized.” It appears he was wrestling with the work of younger scholars, trying to make them jibe with his earlier beliefs about global stages of cultural and intellectual development.

One finds many quotes in Ortiz’s later books that suggest condescending views of black heritage (even if unintended), that reinforce negative stereotypes, and that still ascribe, at least implicitly, to evolutionist views. In the same publication cited above, for instance, Ortiz suggests that black African music is much more ‘backwards’ than white music, if we consider it from an evolutionary perspective, but more ‘advanced’ than that of whites in particular aspects…”<2> Quoting the work of archdeacon of Niger, George T. Basden, he writes “Considering what black Africans are and the environment where they live, the value of their music is as impressive, relatively, as the creations of the great masters employing perfected instruments.”<3> A more extended quote by Basden is included shortly thereafter: “The more one hears African music, the more one is conscious of its vital power. It strikes the most intimate cords in human beings and stimulates their primary instincts … Even the white European who has the most basic affinity for music will feel the elemental forces of his nature shaken by the passionate fervor of black musicians, the purveyors of their art.”<4> Given the lack of commentary surrounding such statements, one can only presume that Ortiz agreed with Basden’s views and did not interrogate the problematic terminology and viewpoints found in them.

A more extended quotation taken from the work of Percival Kirby in the 1930s and reproduced below appears to contradict Ortiz’s alleged support of cultural relativism; instead, it suggests ongoing belief in an evolutionist view of culture, despite attempts to nuance that position. The quote and those above also underscore the fact that references to blacks, Africans, and black descendants in the Americas are frequently conflated in Ortiz’s writing, so that it is unclear which critiques apply to which groups.


African music lacks the technical and instrumental possibilities that European music has today. Considering it from an evolutionist perspective, Kirby has said, referring to the music of certain Bantu peoples, that when they initiated their contact with occidental music it was comparable to European music as it existed in the tenth and eleventh centuries. They [African musics and their culture] are merely a few steps behind. And it is not deluded to say that white music, despite its sublime creations, still lacks certain possibilities achieved by blacks. European- and African-derived musics are at different levels, used for different social functions, and expressed in different vocabularies too. But both possess universal appeal and individual merits.<5>

These textual citations underscore some of the issues I have been grappling with related to the Ortiz translation project: how to frame Ortiz’s writings, how to evaluate his legacy, how to situate his work vis-à-vis that of other academics of the early and mid-twentieth century in Latin America, the United States, and Europe, and how to assess his views on race relative to other prominent intellectuals of the day. Certainly Ortiz along with other seminal figures of Latin American musicology (Mário de Andrade, Carlos Chávez, Carlos Vega, etc.) have become “sacred cows” in many respects; scholars even today are loathe to evaluate their works critically. Ortiz and others must be understood as groundbreaking thinkers, but with many ideological limitations. Their work should be included in broader historiographical discussions, put into dialogue with contemporaries around the world, and understood in relationship to broader social and political trends. As Steven Loza (2006) and others have suggested, comparative academic work of this nature extends current understandings about race, nation-building, and music, and provides an important counterbalance to existing literature too heavily focused on the developed world.

Robin Moore is Professor of Ethnomusicology at the University of Texas at Austin. His research interests include music and nationalism, music and race, music and socialism, philosophies of music pedagogy, and music of Cuba and the Hispanic Caribbean and Latin America more generally. His publications include Nationalizing Blackness (University of Pittsburgh Press, 1997), Music and Revolution (University of California Press, 2006), Music of the Hispanic Caribbean (Oxford Press, 2010), Musics of Latin America (W.W. Norton, 2012), Danzón: Circum-Caribbean Dialogues in Music and Dance (Oxford, 2013, co-written with Alejandro Madrid), College Music Curricula for a New Century (Oxford, 2017), Fernando Ortiz on Music (Temple, 2018), and numerous articles on Cuban music. He currently edits the Latin American Music Review.