The Politics of “Oriental Syncopation”

In this final post exploring issues of musical labor in the age of machine-age imperialism (the subject of a panel Allison Wente, Sergio Ospina-Romero, and I organized for the Society for Ethnomusicology’s 2017 annual conference), I’d like to briefly offer a case study that illustrates why we considered questions about labor, value, and imperial politics to be a useful way to think about musical matters in the early twentieth century.

During my research on the imperial circulation of popular music and musicians along a transpacific entertainment circuit in the 1920s, I came across several reports in Philippine newspapers that struck me as curious.<1> In the late 1910s and early 1920s, articles in the Manila-based newspaper The Philippines Free Press offered celebratory news about the pianist Louis Borromeo, a Filipino enjoying success on the US vaudeville stage.<2> These stories were published during a fierce political struggle. Filipinos sought to claim independence from US colonial rule through a campaign marked in part by combating US stereotypes that implied Filipinos were unfit for self-governance. Amidst the intense debates about how best to represent Filipinos to the world, Filipino journalists praised Borromeo, noting that he had “made quite a hit on the vaudeville stage in America.”<3>

What struck me as curious, though, was that Borromeo’s vaudeville career in the U.S. seemed to perpetuate the same stereotypes that Filipino politicians were trying to counter. From 1919 through 1921, Borromeo performed across the U.S. as part of a trio known as “D’avigneau’s Celestials.” The group – which also included two Chinese-Americans – captivated vaudeville audiences by claiming to be Chinese performers with a unique take on Tin Pan Alley, a take described by one reviewer from Topeka as “oriental syncopation.”<4>

The Celestials’ embrace of “oriental syncopation” was a strategy the performers employed to navigate the challenges facing non-white performers throughout the U.S. Similar to African Americans, Native Americans, Hawaiians, and Chinese vaudevillians, the Celestials shaped their performances according to the narrow expectations of racialized performance.<5> They appeared to conform to the conventions of “yellowface,” a set of performative tropes that signified a generic “Asian-ness” to most US audiences. Even as Filipino politicians toured the U.S. to promote their cause, Borromeo and his partners dressed in Chinese costumes (Fig. 1), performed Tin Pan Alley songs with Chinese-themes (including the 1919 hit “Chong (He Come From Hong Kong)”), and employed broad musical markers of “Asian-ness” in their compositions. For example, Borromeo’s 1920 foxtrot “Jazzy Jazzy Sound in All Chinatown,” used stereotypical markers such as grace notes, open fifths, hints of pentatonicism, and rhythmic patterns of four eighths and two quarter notes (Figs. 2 and 3).  Similarly, the song’s lyrics used pidgin English with phrases such as “winkee little eye, singee way up high” and “we’ll teach them to shimmy-lee with the Amelican [sic] melody.” While other Filipino vaudevillians, such as Domingo Gregorio, were actively trying to convince skeptical US audiences that Filipinos were not the same as Chinese or Japanese – a widely held view at the time – Borromeo seemed to be perpetuating stereotypes of Chinese culture that negatively portrayed a wide array of Asian groups, including Filipinos. 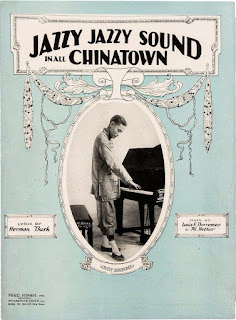 There are many ways to dismiss Borromeo’s positive coverage in The Philippines Free Press as distinctly un-curious, even banal. Perhaps the newspaper’s entertainment writers were not particularly political. Or maybe they were not concerned about Borromeo spreading stereotypes about Chinese. After all, even though US audiences were notorious for the inability to distinguish between different Asian groups, Filipino newspapers were also full of negative coverage about Chinese living in the Philippines.

At the same time, though, it is hard to ignore the broader context of Borromeo’s coverage in the Philippine press. As Borromeo toured the U.S., Filipino journalists such as I. I. Exconde argued that all Filipinos were responsible for representing the Philippines in the best possible light. “Wherever we go and whatever people we meet,” he insisted, “let us not fail to show up the true characteristics of the Filipinos.”<6> If Borromeo did not seem to be showing the “true characteristics” of Filipinos through his stereotypical performance of Chinese-ness, then what was his political value?

It is here, I suggest, where a turn towards musical labor and value can perhaps be a helpful way to better understand the seemingly paradoxical combination of Borromeo’s positive coverage and his embrace of stereotyped performances. My thinking here is influenced, in part, by the work of scholars such as David Gilbert. Gilbert’s work on value and musical labor among African American composers and musicians who strategically embraced stereotypes about black ‘natural rhythm’ in the early twentieth century sheds light on this very issue. In his study of James Reese Europe’s Clef Club, he shows how the area of professional value – the concern with working conditions and wages – can sometimes serve as a catalyst for transforming cultural value and contesting racial stereotypes.<7>

In a similar way, some of the Filipino coverage of Borromeo’s career points towards considering his political value as a musical worker. The Philippine Free Press articles tend to ignore his stage act in favor of celebrating his financial gains. As one headline blared, “[Borromeo was] Said to be Making One Thousand Pesos a Week on Vaudeville Stage in the United States.”<8> What Borromeo did on stage seemed insignificant compared to the opportunities his success afforded him offstage. For example, along with showing that Filipinos could command high wages, Borromeo also used promotional interviews for the Celestials to instead make the case for Filipino independence (as shown in the article from Topeka above). For Filipino journalists, it appeared that Borromeo’s growing wealth and the publicity that came with his growing success were his critical source of value.

I am continuing to explore the political significance of Borromeo’s vaudeville career amidst a transpacific debate about US imperialism (a debate that, not coincidentally, is deeply informed by racialized ideas about work).<9> I cannot help but think that questions about Borromeo’s significance as a worker – as someone whose performances seemed to matter less than what those performances afforded him – will be critical for thinking about how music and musical workers were made valuable and meaningful to both performers and audiences as the U.S. and the Philippines negotiated their colonial relationship.
***

Fritz Schenker is a postdoctoral teaching fellow at St. Lawrence University. He previously held the same position at Washington University in St. Louis. He received his PhD in ethnomusicology from the University of Wisconsin-Madison in 2016.