My first time in front of Notre Dame was in 2014. I had just passed my PhD qualifying exams and had flown to Leeds to attend a conference. A spur-of-the-moment decision—and cheap European airfare—found me in Paris days later. I was just beginning research on a dissertation that aimed to uncover the parallels between Paris’s musical and urban histories during the nineteenth century. I had heard the music and read the books, but had never seen the place, so I was expecting to be blown off my feet and into the Seine at the sublime sight of Paris’s most famous sacred monument.

I resisted the urge to reach for my phone to take a picture. To do so, I feared, would be to succumb to that touristic faux pas: to see a place in order to have seen it, as art critic Robert Hughes once quipped.<1>

On Monday, April 15, a fire engulfed Notre Dame’s roof and spire, devastating large parts of the cathedral. As gruesome images flooded my social media feeds, I noticed a common theme among posts by those who, like myself, had spent time in Paris. Their photos, which they once thought inconsequential, became personal relics. These photos now bore the weight of their grief.  While the philanthropic outpouring in the wake of the Notre Dame fire is understandable and justified, it should also remind us of the sacred spaces that have also suffered destruction but do not benefit from the prestige of being urban/national monuments. Cities, in other words, must hold both the monumental and the mundane in their care.

The city of Paris has seen its share of destruction, both accidental and deliberate. Before 1860, Notre Dame was the center of a dense working-class district. As do documented by Charles Soulier’s photographs of the Île de la Cité, Notre Dame shared the skyline with a dense collection of municipal buildings and working-class housing (See image below). After 1860, Emperor Napoléon III’s right-hand bureaucrat Georges-Eugène “Baron” Haussmann oversaw the near-total demolition of the Île de la Cité, razing nearly every edifice associated with the working class and leaving only the cathedral and a few other government buildings. This is the Île de la Cité we now know, an island whose sole purpose—to tourists, at least—is to provide vantage points from which to admire Notre Dame’s monumentality at a distance. 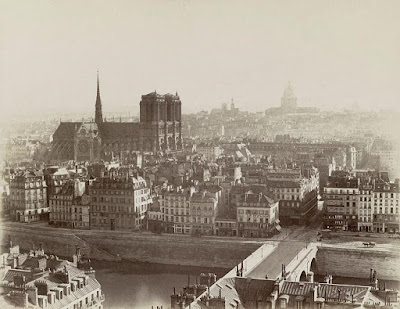 The Second Empire did not grieve the destruction of centuries-old houses, alleys, and squares, as those structures stood in the way of the streamlined urban utopia for which Napoléon and Haussmann both pined.<2> But as aesthetic trends shifted in the 1850s from the romantic to the realistic, composers increasingly issued nostalgic tributes to Le vieux Paris, or the working-class Parisian landscape that preceded Haussmannization. Entire books were written on the subject, such as Victor Fournel’s Paris nouveau, Paris future (1865) and Amédée de Ponthieu’s Légendes du vieux Paris (1867).

Writers, musicians and artists had of course mined “Old Paris” for inspiration well before 1850: Janequin’s Voulez ouyr des Cris de Paris (c. 1530) is an entertaining example that I use in my music history classes to discuss how musicians translated the chaotic din of the city into ordered polyphony.<3>

But nostalgia for Paris’s landscape became a dignified literary trope during the Second Empire, taking a more serious, methodical tone than preceding treatments of the subject. The liminal spaces of working-class Paris became to French musicians and writers what historian Pierre Nora would call lieux de mémoire, or physical or symbolic spaces that accumulate meaning through invented traditions such as consecrations, visits, and artistic reproductions.<4> Lieux de mémoire are palimpsests, in that their perceived immortality is due to frequent additions and reconstructions over time. As vast networks of liminal spaces and lieux de mémoires, cities undergo a continuous process of destruction and reconstruction. As Michel de Certeau so eloquently put it, “the surface order [of a city] is everywhere punched and torn open by ellipses, drifts, and leaks of meaning.”<5> Notre Dame was not built to last forever, at least not in any particular version. The cultural memory of an urban space is constructed out of both material and immaterial substance: stone, wood, and glass, but also poetry, music, journalism, and literature.

Music can also assume the role of a lieu de mémoire. It can evoke memory, interpret shared experience, and—via a programmatic association or tie to a political event—directly contribute to discourses around identity formation. Three musical works dating from the mid- to late-nineteenth century encapsulate this fusion of what Alexander Etkind would call “hard” and “soft” cultural memories.<6> Jean-Georges Kastner’s Les voix de Paris, Augusta Holmès’s Lutèce, and Gustave Charpentier’s Louise are not repertory staples, neither in the U.S. nor in France. But each work engages meaningfully with the material and immaterial forces that constituted the imagined landscape of le vieux Paris.

Jean-Georges Kastner (1810-67) married rich, so he did not need to compose to make a living. Today he is best remembered for his treatises on orchestration (1844) and military band music (1848). In 1857 Kastner published Les voix de Paris, a quasi-ethnographic essay on the history of street hawkers in the French capital. Kastner includes musical examples to buttress his ideas about the timbre and contour of different street industries. At the end of the essay is a fully scored, three-movement work for orchestra and chorus titled Les cris de Paris.<7> Despite the work’s humorous tone, noted critics such as François-Joseph Fétis and Joseph d’Ortigue were struck by the nostalgic tone of Kastner’s writing; indeed Kastner frequently refers to hawkers as fellow members of his musical community.<8> No recording of the work exists, but Ensemble Janequin arranged a madrigalesque version of a portion of Kastner’s work:

Lutèce was the name of the Roman-era Gallic settlement on which the city of Paris was built. In the late 1860s, during a massive bulldozing of the 5th arrondissement, the archaeologist Théodore Vacquer discovered the ruins of an arena, which turned out to be the largest remaining structure from the city’s Lutèce era.<9> In the wake of its discovery, the Arènes de Lutèce became a divisive subject of debate. On one hand, it presented an obstacle to building an omnibus depot on the city’s Left Bank. On the other, it reinvigorated a preservationist movement that directly challenged Haussmann’s irreverent attitude towards the city’s historical geography.

It was in the midst of this debate that, in 1878, the City of Paris sponsored a competition for a new, large-scale musical work. Augusta Holmès (1847-1903) submitted a work titled Lutèce, a symphonie dramatique for orchestra, soloists, and chorus. Although it came in second (after first-prize entries by Benjamin Godard and Théodore Dubois), Lutèce was unanimously praised by the composers on the jury. Le mènestrel praised Holmès’s work, despite expressing surprise that it was indeed “written by a woman.”<10> The text, by Holmès herself, features themes fit for a government-funded contest: a call to battle, war, defeat, and redemption. Lutèce is a tour-de-force of stylistic hybridity, fusing Wagnerian chromaticism, leitmotivs, neo-medieval fanfares, and tightly knit choral polyphony.<11> Viewed in the context of the ongoing debates about the city’s Roman ruins, Holmès’s work was a powerful reminder that Third-Republic Paris’s self-fashioning was tied to the city’s Gallo-Roman past.

Louise is the story of a seamstress who navigates relationships with her parents, her neighbor Julien, and her working-class milieu in Montmartre. Scholars have explored the opera’s ties to Wagnerism and to fin-de-siècle realism.<12> But what is most striking is how Charpentier weaves street hawkers’ melodies—known for centuries as the Cris de Paris—into the orchestral fabric of the prelude to Act II. Charpentier had clearly consulted Kastner’s Les voix de Paris; the sweeping modal melody heard in the example below had been attributed by Kastner to the marchande de plaisir, a street vendor who sold candies and other trinkets to passersby in the streets. The same motive also appears in Offenbach’s Mesdames de la Halle, a one-act opérette-bouffe from 1858 that features Parisian market vendors in protagonist roles.<13> Kastner, Offenbach, and Charpentier not only drew on the same subject material, but also imbued Paris’s working-class community with musical agency. The hawkers’ melodies transcend mere couleur locale and play key structural and dramaturgical roles in the composers’ respective works. In each of these cases, le vieux Paris takes center stage.

As I have argued here, musical works, like monuments and cities, are palimpsests. Their caretakers add meaning to them, update them, reinterpret them, or slavishly preserve them. In the nineteenth century, Parisian musicians actively participated in discourses around urbanization, giving credit where it was due, but also resisting the modernist impulse to sacrifice the everyday to make room for the exceptional. The nineteenth-century notion of le vieux Paris became a revisionist ideology that expressed care for the unremarkable, forgettable, and un-monumental aspects of modern life. Rebuilding Notre Dame will add new layers to the cathedral’s rich history, not only as a lieu de mémoire, but also as a center of community.  Just as the vieux Paris narrative granted agency to everyday spaces and communities, so too should Notre Dame inspire us to think and act locally.

Jacek Blaszkiewicz completed a PhD in musicology at the Eastman School of Music in 2018, where he was supported by an Alvin Johnson AMS-50 Fellowship. Currently the Sorkin Visiting Assistant Professor of Music at Williams College, Jacek will join the music history faculty at Wayne State University in Fall 2019.