NOTE: Singing Jeremiah: Music and Meaning in Holy Week (Indiana UP) appeared in April 2014. Here is an excerpt. 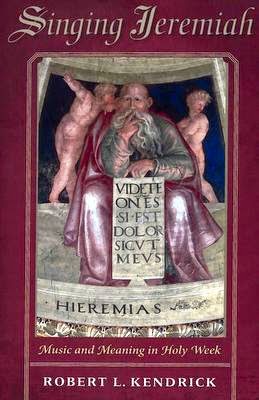 In the ritual year of early modern Catholics, the days before Easter represented the longest single commemoration, collective and personal, of the central events of salvation. Despite the survival or re-invention of historical Holy Week traditions today, it is still hard to imagine how much prayer and penitence were packed into the seventy-odd hours between the afternoons of Wednesday and Saturday. The three central days—the Triduum—recalling the Passion included the chanted words, participatory rites, and sonic behavior of liturgical Maundy Thursday (“Feria V in Coena Domini,” hereafter F5), Good Friday (“Feria VI in Parasceve,” hereafter F6), and Holy Saturday (“Sabbato Sancto,” hereafter SS). Beyond the structures of the Divine Office and Mass, there were community actions: processions, “entombments of Christ,” depositions from the Cross, ceremonies of mourning and weeping, and, less appealingly, group violence. The social re-enactment of Christ’s atonement went hand in hand with individual purging of sin via penance and often Confession. This dialectic between the audible expression of mourning and the internalization of remorse was vital for the Week’s meaning.

Sounds simple and complex projected the listing of human guilt, the recollection of the Passion in narration and allegory, and the meanings of liturgical action. In order to focus on allegory and narrative voice, this study considers largely the most renowned music of these days, the polyphony and chant for the Canonical Hours of Matins followed by Lauds, in the two centuries after 1550. These were combined as a single service in Catholic continental Europe and its outposts. The Hours also drew lay participation, beyond the monks, nuns, or cathedral clergy who would have sung the texts.

From some point in the later Middle Ages onward, evidently first at the Papal court and then increasingly elsewhere, these services were in most places anticipated to the late afternoon of the day preceding their liturgical assignment. Thus the texts of liturgical Thursday were read or sung on late Wednesday afternoon, and similarly Friday’s Hours on Thursday and Saturday’s on Friday, each day as the natural light in churches waned. This ambient darkening was echoed and enhanced by the extinguishing of church lights as the service went on. Because of this interaction, the Hours were known as the Office of Tenebrae: darkness/shadows.

Although the action and texts of the services were highly determined, they conveyed not only emotion but social meaning. To consider simply the written musical documents leaves out essential if irrecoverable elements: vocal/musical execution; the prescribed gestures and movement; and the behavior of participants. Before reducing sound to breviary prescriptions or written scores—in the case of Lauds’ music, the level of improvised ornamentation suggests that much more was involved—we might take to heart Ernesto de Martino’s critique of text-centered approaches to personal and collective threnodies for deceased family members in modern southern Italy. For de Martino, neglecting performance meant missing major aspects of the rituals of lamenting.

Robert L. Kendrick is professor and chair of the Department of Music at the University of Chicago (webpage HERE).