The Classical Style, of sorts

One year, during the opening Dean’s Welcome at the conservatory where I teach, the head of the violin studio addressed the students, faculty, and staff, extolling the school’s focus on performance training. Pointing offstage, he announced dramatically, “So, if you want to be a musicologist, there’s the door.”

This was an awkward moment for me, as the only full-time musicologist at the school. (I briefly considered making an even more theatrical exit right out the indicated door.) One tires of this false “musician vs. musicologist” opposition, so perniciously entrenched in the world of classical music, its academies, and—sadly—even one of its newest operas.

The Classical Style—An Opera (of Sorts), featuring music by Steven Stucky to a libretto by pianist and MacArthur Fellow Jeremy Denk, had its world premiere at the Ojai Music Festival on June 13. Denk described the work as “possibly the first and last opera written about musical analysis,” but the work tries to be many things: an opera buffa-style musical pastiche (kudos here to Stucky’s clever score); a philosophical reflection on old musical styles in a contemporary world; a farcical dramatization of basic structural processes in Viennese Classicism; and an homage to Charles Rosen and his award-winning 1977 study. 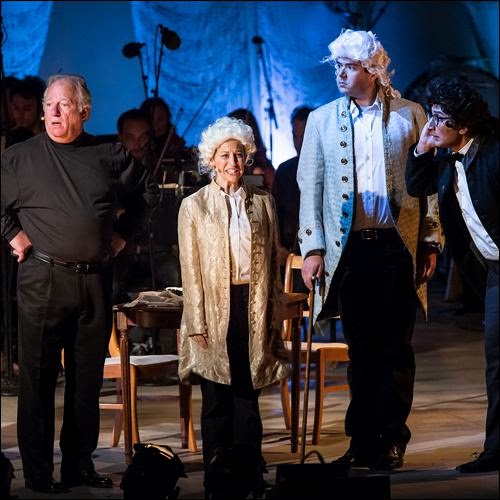 The whole crazy idea might have worked, had Denk—a skilled prose stylist but a first-time librettist—resisted the temptation to dramatize his own hostile feelings toward “musicology,” with about as much subtlety as my violinist colleague. Denk’s antagonism towards Richard Taruskin comes through clearly in the libretto for The Classical Style; the supposed “villain” of the story, Henry Snibblesworth, introduces himself (twice) as “a musicology Ph.D. student, working with Richard Taruskin at the University of California, Berkeley.”

But Snibblesworth makes a pretty pathetic antagonist. Dressed in an argyle sweater and Dockers, four-eyed and singing in a prissy, nasal style, he seems more Howard Bannister in What's Up Doc? than Dr. Evil in training. True, his analytical intervention causes Don Giovanni to lose his mojo while attempting to ravish Donna Anna, but this outcome is unintentional. Ultimately, Snibblesworth—a lowly grad student, after all—comes off as a fan boy, not a scholarly provocateur. He doesn’t even dare to bad-mouth Charles Rosen, the opera’s philosophical hero.

Actually, a staged rhetorical feud between Taruskin and Rosen might have been more interesting— and funnier, too. Instead, Denk employs Snibbleworth as a dim foil for Rosen’s more, um, penetrating analytical skills. The only musicology we hear at the opera’s fictional scholarly symposium is a music-appreciation level explanation of sonata form set to a textbook example by Stucky. The attendees wear party hats that look like mini dunce caps. When Mozart, Haydn, and Beethoven turn up looking for Rosen, they quickly grow bored, begging, “Charles you must help us! You must remind us of what we once were!”

Snibblesworth’s self-serving definition of classical music (“It’s music so beautiful that it has to be explained”) is played for laughs, but it’s hard to see how The Classical Style—both Rosen’s book and the opera—aren’t equally implicated. As it turns out, the overly earnest Snibblesworth and the tedious symposium are there to distract us from the opera’s real target, the kind of scholarship for which Taruskin and Susan McClary (She Who Must Not Be Named But Only Mocked in The Classical Style) have become known. As Denk’s libretto jeers in turn at gender studies, historical context, cultural studies, and other aspects of humanist musical inquiry, one can only suppose that Rosen’s take on sonata form is superior because it (mostly) sticks to the notes and is informed by that special connection to music that only performing artists enjoy. Woe to the musicologists who deny “the music itself” is all that really matters; they will, like the unfortunate Henry Snibblesworth, be cast down through the trap-door to operatic Hell.

One of the most unintentionally amusing aspects of The Classical Style is how the opera ends up demonstrating the continued relevance of new musicology’s gendered critique of its subject matter. Denk’s version of Da Ponte’s “Catalogue Aria,” as sung by Snibblesworth, rewrites its punch line as “But in Berkeley, 3000 essays on gender constructs.” But didn’t anyone notice how much the opera’s allegorical presentation of Classical tonality as a “codependent love triangle” relies on those same old gender stereotypes? Tonic (virile, bass singer), Dominant (neurotic soprano longing for Tonic), and Subdominant (sensual femme who flirts with everyone) play out the precise roles assigned for them by McClary in Feminine Endings! Even the characterization of the Great Composers perpetuates gendered clichés associated with their subsequent reception: Beethoven is a muscular bass who thinks all the time, while Mozart is … wait for it ... played by a girl.

Ultimately, denouncing humanist musicology in an opera betrays the origins and nature of opera itself. In “Taking on Taruskin,” Denk remarks that “I don’t think thought and music are enemies, obviously … but they are complicated friends. We can only keep Don Giovanni alive by playing it, thinking about it, writing about it, talking about it. But in a sense we also keep burying it under our interpretations, and we have to keep digging it out again. It never stops.” Denk is right to note that the operatic canon cannot escape from history, not least because it depends on a constantly changing and expanding tradition of production. Don Giovanni not only carries traces of Mozart’s world (whether you know that or not), but must also inspire—through words as well as music—connections to our own.

This intertextual dynamic is inherent to opera, or at least to operas like Don Giovanni that still provoke musicological argument and inquiry. Opera is about thought and music together, about ideas and music together, about words and music together. It is the original humanist genre, harnessing abstract thought in musical form to emotionally moving narratives about human society and psychology. The Classical Style—An Opera (of Sorts) might have offered a more humane defense of the prerogatives of music and musicians. I would have welcomed a concluding Mozartian gesture of conciliation in the current ideological querelle des bouffons, but, unhappily, only harmonic tensions were resolved.

Kristi Brown-Montesano, a faculty member at the Colburn Conservatory of Music in Los Angeles since 2003, is currently Chair of Music History there. A trained soprano, she received her Ph.D. in musicology from UC Berkeley, with a specialization in 18th-century western European music. Her book The Women of Mozart’s Operas (Univ . of California Press, 2007) offers a detailed study of the female characters of the Da Ponte operas and Die Zauberflöte, evaluating the original works as well as the reception history of these characters. Brown-Montesano has presented and published essays on opera, film music, opera education, and trends in marketing classical music to children.