by Maureen A. Carr 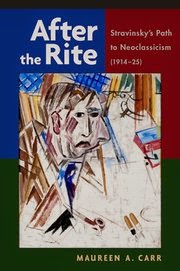 One of my goals here has been to illustrate how musical sketches help to inform music analysis. I use original sources, diplomatic transcriptions, and diagrams to illustrate:
In addition to these visual representations of musical ideas, the cultural complexities that established the framework for Stravinsky’s evolution as a composer are also considered, such as the cross-currents in literary circles around 1914 that were concerned with Shlovsky’s “Resurrection of the Word” and defamiliarization, the swirling designs in futurist and cubo-futurist paintings, and Fokine’s outline of the “New Ballet” (appearing just before the outbreak of World War I) that seemingly paralleled the emergence of Stravinsky’s Neoclassicism.

Stravinsky’s take on sonata form is discussed through the crystallized Neoclassicism in the Octet and Concerto for Piano and Winds. Allusions to compositional models by Bach and Beethoven (Piano Sonata) and one by Chopin (Serenade in A) help realize the depth of Stravinsky’s knowledge of keyboard literature.

Some topics and notions:

A crucial year for experiments in literature, art, music, and dance that were initiated by luminaries who spent their early years in St. Petersburg, including Shklovsky, Lourié, Sonia Delauney, Stravinsky and Fokine. Robert Delaunay (though born in Paris) is also included because of his paintings that successfully merged cubism and futurism. Vladimir Baranov-Rossiné, another cubo-futurist, was well-known for his distinctive use of textural superimposition, which would become a distinctive feature of Neoclassicism in art, music, and poetry. The portrait of Stravinsky (on the cover) by Larionov also represents cubo-futurism.

Futurism was a central artistic concern for numerous artists. This year also saw a collaboration between the painter David Burliuk and Vladimir Mayakovsky for the book The Tragedy in Two Acts with Prologue and Epilogue, Arthur Lourié signed the manifesto “We and the West,” and Viktor Shklovsky was promoting futurism in poetry through his essay on “The Resurrection of the Word.” Sonia Delaunay was creating patterns of different shapes that were recurring simultaneously at different angles in Prismes électriques and using adjacent blocks in different colors at the same time Stravinsky was composing the Three Pieces for String Quartet, in which he juxtaposed and superimposed multiple ostinato figures within sound blocks in order to synthesize the techniques that he had previously used in The Rite.

These analogies are not intended to suggest that there was a concerted effort among Burliuk, Stravinsky, Shklovsky, Lourié, and Delaunay, but rather a unanimity of spirit that reflected the prevailing aesthetic shared by futurism and formalism that was manifesting itself within artistic circles with the goal of rejecting the past.

The Classicism of Models

The goal of abandoning the “classicism of models” in favor of the “classicism of reference” in Boulez’s aesthetic design for the future of music is not always abundantly clear in Stravinsky’s music. However there are moments in his compositional output where Stravinsky’s classicism became referential. The abstract level of his Concertino (1920) serves as a fine example, yet Stravinsky’s use of sound blocks in this work would be reminiscent of Renard (1915–16). Furthermore, he used a Russian theme in Concertino. Suffice it to say, Stravinsky would often rely on models in one way or another as a means of inspiration. Similarly, the use of models in other art forms, such as literature, art, music and dance would continue to prevail.

In Renard, Stravinsky’s attention to the creation of “discrete blocks” can be illustrated in a diplomatic transcription of a musical sketch for Renard from Sketchbook II at the Stravinsky archive of the Paul Sacher Stiftung. It is found among the sketches associated with Three Pieces for String Quartet.

It is useful to consider the first 22 measures of “Dance du diable” from Histoire du soldat in comparison with Stravinsky’s “setting” of the same gesture in Renard.

Stravinsky’s Path to Abstraction: An Interruption on His Journey to Neoclassicism

Piano-Rag-Music (1919) represents the full flowering of Stravinsky’s improvisatory style that he experimented with in the Étude pour Pianola (1917). Just as a visual artist might at first create paintings that are “representational” while absorbing new materials, so too was Stravinsky creating a picture or a snapshot of ragtime in his Ragtime for 11 Instruments (1918) and with “Ragtime” in Histoire du soldat (1918) he was appropriating the rag idiom. (Stravinsky himself referred to Ragtime for 11 Instruments as a picture of ragtime.)

In order to arrive at a clearer understanding of Stravinsky’s compositional process for Symphonies, it is necessary to discuss the evolution of discrete fragments from sketch to score by presenting some of these musical ideas within the context of both versions of Symphonies, with annotations on the score in order to provide a glimpse as to how Stravinsky incorporated discrete blocks into the fabric of the Symphonies.

“Mavra might …be called a Russian transcription of Pulcinella. ... Only the ‘masks’ are different in the two pieces – the stock characters of the commedia dell’arte in the one and the equally (for Pushkin) stock setting of the old Petersburg suburbs in the other. The character of the music differs correspondingly: sunny and carefree in Pulcinella and grotesque in Mavra” (Mikhail Druskin, Igor Stravinsky, trans. Martin Cooper, 69).

Stravinsky has no imitators

As George Antheil would write in 1924: “If anything could determine the genius of Stravinsky today, it is the fact that he has no imitators. Where is the musician who can organize the tremendous innovations he has made in musical space, creating as he has, almost a third dimension in music?” (Antheil, in Chicago Tribune Sunday Magazine, February 17, 1924).

Maureen A. Carr is Distinguished Professor of Music at Penn State, where she teaches undergraduate and graduate music theory. She is author of numerous books and articles on Stravinsky's compositional process and, with Bruce Benward, the ubiquitous Sight Singing Complete (8th edn, McGraw-Hill, 2014).

Email ThisBlogThis!Share to TwitterShare to FacebookShare to Pinterest
Labels: Stravinsky