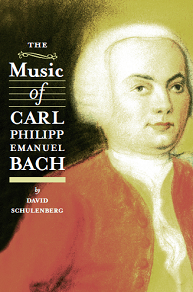 Four years ago, while many of us were celebrating the two hundredth birthdays of Chopin and Schumann, a smaller number were observing the three hundredth birthday of another composer-keyboardist: Wilhelm Friedemann Bach, the oldest surviving son of Johann Sebastian. Now in 2014 rather more attention is being paid to the life and music of Sebastian’s second son, Carl Philipp Emanuel. In addition to the conferences and the festive German observations previously mentioned by Annette Richards on this blog (“C. P. E. Bach at 300,” Aug. 2, 2014), new books, articles, and editions have been published this year or are in the press. Among these are several volumes in the new collected edition being issued by the Packard Humanities Institute, as well as a special issue of Early Music (August 2014) and my own book The Music of Carl Philipp Emanuel Bach (Univ. of Rochester Press, 2014).

All this activity centered around one only moderately well-known musician suggests that individual composers, although no longer the focus of every current style of musicology, retain their interest and attraction not only for performers and the general public but for scholars. My book, although I call it a “compositional biography” unconcerned with CPEB’s personal life and circumstances, reflects my view that the individual composer remains a nexus within which society, culture, and environment connect to produce something that is unique and valuable: in this case, a repertory of about a thousand diverse works. As much as my own work has been shaped by academic trends and the admonitions of critics and scholars that favor focusing on the music itself and its cultural and historical context, in writing the book I have found myself considering what caused CPEB to write what he did; why he “swerved away” (as Peter Williams puts it) from the style of his father and emulated composers we consider far less significant, such as Hasse, Graun, and Homilius; how he could consider certain vocal compositions to be “masterpieces,” his own word for several late works that I find more problematical and less appealing than the well-known keyboard pieces; why in his later years he devoted what seems excessive effort to exercises in melodic embellishment and récherché harmony, never returning to the dramatic, sturm-und-drangisch style of certain relatively early compositions—the First Württemberg Sonata, the D-minor Concerto W. 23—that more readily captivate modern audiences and students.

One reason for the continuing focus on the individual composer must be the sheer human interest that, together with the music itself, remains the underlying motivation for so much contemporary work by performers and musicologists. The Bach family—or any family—automatically elicits a certain type of interest, and when we try to explain how one family member turned out as he or she did, producing a particular type of music or following a particular sort of career, we engage serious historical issues while establishing an imaginary yet genuinely empathetic connection with another human being. An austere view of musicology as a study of cultural products within a particular society or economy, or the equally austere concept of performance and analysis as dealing primarily with notes and their relationships to one another, certainly has its place within a learned discipline. Yet it doesn’t inspire many listeners or performers, and on its own it is unlikely to produce satisfying explanations for the aesthetic aspects of the music: how it moved its original audiences, how it does so today, what if anything it means.

Perhaps, then, part of the value of observing composer anniversaries lies in the reminder they provide—for both musicologists and the general public—that individual musicians of the past were historical figures, actors within a given time and place whose works manifest their own and their society’s values and experiences. What makes these musicians really interesting, however, is that by reading about them, or hearing their music in performance, those values and experiences mingle with our own; music history becomes musical presence. This, at least, seems to be one of my own motivations as reader, writer, and performer. A musicologist who shares this view could do worse than bearing it in mind when trying to communicate insights and discoveries to someone else.

David Schulenberg’s publications include the textbook Music of the Baroque (3rd edn. Oxford UP, 2013) and recordings of chamber music by Quantz, C. P. E. Bach, and Frederick II of Prussia on Naxos, Hungaroton, and Albany Records. Chair of the music department at Wagner College (Staten Island, NY), he also teaches in the Historical Performance program at The Juilliard School.