It seems strange to talk about four-hand piano playing as a lost art or a forgotten practice, given how frequently those of us who make music or think about music professionally still sit down at the piano together. And yet, one look at journalism, literature, and visual art from the nineteenth century makes clear how much more universal four-hand playing was then than it is now. Everybody played with everybody—Queen Victoria with Carl Czerny, Nietzsche with Wagner, Mozart with Johann Christian Bach. Everybody wrote about it, thought about it, painted it.

Today when we look back at the music this boom produced we tend to emphasize those aspects and forms of four-hand playing that we still recognize from the way we make music today—four-hand scores as a tool for instruction, as a tool for composition and practice, as a way for educated music-lovers to reproduce orchestral pieces within the comfort of their own home.

It is the basic contention of my book Four-Handed Monsters: Four-Hand Piano Playing and Nineteenth-Century Culture (Oxford UP, 2014; first published in German, Würzburg, 2009) that that is a partial view of the phenomenon, one that makes invisible several factors the nineteenth century itself often seems to have tried to repress about the phenomenon: that four-hand playing, which often demanded close contact between the players, almost necessarily had erotic undercurrents in the prudish atmosphere of the bourgeois parlor; that the mass of four-hand transcriptions meant that it was far more closely connected to the market and to capital than attendant musical phenomena;  that it seemed to play with categories of subjectivity and personhood that fascinated the nineteenth century.

What makes the topic so fascinating is that four-hand piano playing could be both a kind of parlor trick—essentially a novelty act, a fun social game to play after dinner—and could function as a conduit for serious thinking about music and an essential part of the transmission of musical expertise.

And usually composers, critics, players, and literary authors refused to make a distinction between one kind of four-hand playing and another. It was an inescapable part of any serious musical consumer’s repertoire, but it was that part he most frequently suspected of being less-than-serious.

The music critic Eduard Hanslick for instance was as passionate a four-hand player as they came. But when he discusses it in his criticism, it’s never quite clear how seriously he takes the practice—one moment he’ll talk about one’s relationship to “my four-handed person” (i.e., his duet partner) as a kind of marriage, the next he’ll compare their consumption of scores to playing cards.

The sense that there was something all-too-private about four-hand piano pervaded nineteenth-century depictions of the practice. The Austrian novelist Arthur Schnitzler regularly played his way through scores with his mother—but when he restaged that scene in one of his stories, he took the scene out before publishing it.

It is this difficulty the nineteenth-century public had in placing four-hand playing, this inability to decide how serious or how frivolous it is, how public or how private, how much it constitutes art and how much it resembles labor, that makes the practice such a fascinating lens through which to analyze the musical world of the bourgeoisie of the nineteenth century. 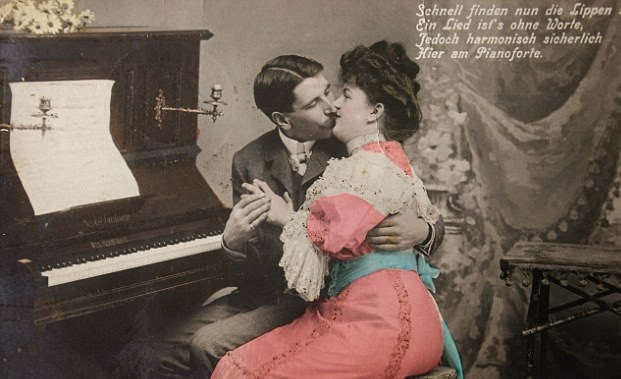 Adrian Daub is Associate Professor of German Studies at Stanford University. In addition to Four-Handed Monsters (published with a subvention from the AMS 75 PAYS Endowment), he is author of  Uncivil Unions: The Metaphysics of Marriage in German Idealism and Romanticism  (Univ. of Chicago Press, 2012) and Tristan's Shadow: Sexuality and the Total Work of Art (Univ. of Chicago Press, 2013).

Email ThisBlogThis!Share to TwitterShare to FacebookShare to Pinterest
Labels: pianism