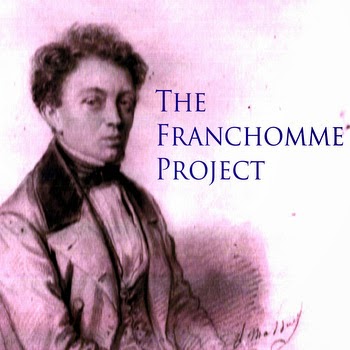 Auguste Franchomme (1808–84) was perhaps the most admired French cellist of his time. Born in Lille in 1808, he came to Paris in 1825 with almost no money and won the Conservatoire’s premier prix in cello within a few months.  Within five years, he was one of the most famous cellists in all Europe, known for his beautiful tone, moving performances, and virtuosic technique (which he was already showcasing in his own compositions, see below). While still a student in Paris, he was employed with the Théâtre de l’Ambigu-Comique. In 1827 he played briefly in the Opéra orchestra before moving to the Théâtre-Italien, where he soon became principal cellist. He became first cellist of Louis-Philippe’s Musique du Roi; cellist of the Alard Quartet and the Matinées Annuelles (the most prestigious French chamber music society of the mid-19th century); principal cellist of the Paris Conservatory Orchestra (Société des Concerts du Conservatoire); and a beloved teacher at the Paris Conservatoire for 56 years, until just weeks before his death. He lived modestly, but was able to acquire the Antonio Stradivarius cello that had previously been played by Jean-Louis Duport (and, later, by Mstislav Rostropovich), described by Anner Bylsma as “the most beautiful cello ever made.” He was made a chevalier of the Légion d’Honneur in 1872.

Franchomme is remembered today mainly as the dear friend and frequent performance partner of Chopin.  Liszt introduced Franchomme to Chopin when they were in their early 20s, and their ensuing friendship became an important mooring in Chopin’s increasingly tempestuous life.  Franchomme was the dedicatee of several of Chopin’s compositions including his final work, the Sonata for Piano and Cello, op. 65, and he was the recipient of the last letter Chopin wrote. Chopin incorporated Franchomme’s revisions in the revised version of the Introduction and Polonaise brillante, op. 3, and the two friends composed together their Grand Duo Concertant sur “Robert le Diable” de Meyerbeer.

Franchomme was an accomplished composer in his own right, but, remarkably, most of 50-some pieces he published during his lifetime have been out of print since his death The forthcoming CD on the Delos label, “The Franchomme Project,” offers world premiere recordings of some of these works. You can watch a video of me and Julia Bruskin performing the Nocturne, op. 14, no. 1 HERE, and of me and Saeunn Thorsteinsdottir performing the Nocturne, op. 15, no. 2 just below.

Franchomme first appeared as soloist before the grand public at a concert of the Société des Concerts, during its second season, when he was just 21.


Most likely he offered one of the Caprices he would eventually publish as his op. 7.  This is what  Fétis wrote in the Revue musicale a few days later:

A young man, a child, M. Franchomme, has come, unknown, and played without pretention a cello solo, in a manner that suddenly places him in the lineage of the greatest artists.  He stated a theme, without any ornament, and the audience was transported. … Three, four, five rounds of applause were barely enough for the audience to express their pleasure.

Louise Dubin has appeared recently with BargeMusic, Caramoor, Music of the Spheres, Piccolo Spoleto, Savannah Music Festival, in addition to concerts promoting The Franchomme Project. Her webpage is HERE.