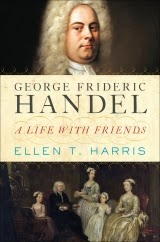 In my book George Frideric Handel: A Life with Friends (W. W. Norton, 2014), I look at Handel’s music and life in relation to the lives of six identifiable friends: Joseph Goupy and James Hunter, who are described by Sir John Hawkins as Handel’s closest friends; Elizabeth Mayne, Elizabeth Palmer, and Anne Donnellan, who like Hunter, were recipients of bequests from Handel; and Mary Delany, whose correspondence details a close friendship. In the following excerpt from the first chapter, “Introductions,” I discuss some of the commonalities among these friends and suggest the kinds of associations they had with various themes in Handel’s music.

Goupy, Hunter, Delany, Donnellan, Mayne, and Palmer were among Handel’s closest acquaintances, and, together with Handel, they are the co-protagonists of this book. That is not to say that they represent a group of friends. Delany and Donnellan were intimate, but otherwise there is no evidence that any of the others were close. Rather, each of the friends had an independent relationship with Handel. Except for Goupy, who is identified as an intimate friend in the eighteenth century, and Delany, whose correspondence details their close association, these individuals appear in Handel’s will as recipients of friendship bequests, standing apart from the family legacies and the gifts Handel made in gratitude for service—such as those bequests given to John Christopher Smith, his librettists, medical and legal advisers, and servants.

The affinities among these six friends paint a striking picture, further distinguishing them from other legatees and known associates or patrons. Most lived close by in the neighborhood of St. George’s, Hanover Square. With the exception of Hunter, their homes form a circle with a radius of less than a quarter of a mile. Not surprisingly, all six friends possessed deep musical interest and talent, something that does not appear to be the case for other legatees who were also neighbors, such as James Smyth, Benjamin Martyn, and John Gowland, whose wills make no reference to music books or instruments. Most can be considered independent in terms of religion, few of them adhering literally to the normative creed of the Church of England but rather ranging in belief from Catholicism through dissenting protestant sects to heretical versions of Anglican doctrine, reflecting Handel’s strong belief in religious tolerance. They also stand apart from the norm in terms of marital status. Only Mrs. Mayne had children. The others who married, including Delany, Hunter, and Palmer, made matches strongly disapproved of by their families, resulting in various degrees of disinheritance. None of these marriages resulted in children. The others, not only including Handel, Goupy, and Donnellan but also, among a wider circle of acquaintance, Bernard Granville, Christopher Batt, and Benjamin Martyn, remained unmarried; James Smyth, who did marry, was childless. Like Handel (but unlike Granville, Batt, Martyn, or Smyth), all six friends experienced serious financial problems in the 1730s or 1740s, and many, as a result, were engaged in litigation or bankruptcy. Nevertheless, all, like Handel, were extremely generous and charitable with what they had.

The documentary evidence about the private lives of these friends, in some cases much more abundant than the surviving information on Handel, derives from multiple sources, including letters, diaries, personal accounts, legal cases, property deeds, and insurance records, and offers an intimate picture of London life during the first half of the eighteenth century. The lack of such sources for Handel means that his biographers have hardly any testimony from the composer himself. By examining the sources concerning his friends, one can glimpse Handel’s personal interactions and posit motivations and threads of action. Although these conclusions often appear shorn of the cautionary “probably,” thereby avoiding the constant repetition of this word, they are educated guesses based on extensive research. One of the most rewarding aspects of exploring these relationships has been the light it sheds on Handel’s compositions. Put simply, the lives of his friends illustrate how Handel’s music intersected with eighteenth-century London. 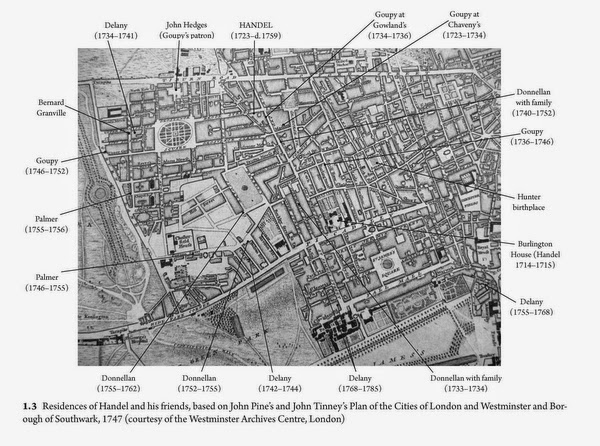 The music of Handel offers a tapestry of eighteenth-century culture and society. Woven with tremendous skill and imbued with vibrant colors, the images on its surface may tell of shepherds and shepherdesses, chivalrous knights, kings and queens, and biblical heroes, but the threads that make up the warp and weft derive from the interests, concerns, and desires of the world in which Handel lived. While it is hardly surprising to say that art is a product of its time and place, the relationship between Handel’s music and its milieu goes deeper than most. In order to gain a full understanding of the extent of this relationship in both public and private contexts, it is not enough to touch on contemporary issues in a general way or to focus in depth on a single cultural issue, although both approaches can enhance (and have significantly altered) our understanding. Nor does an examination of the few surviving records of Handel’s personal life offer satisfactory insight into his compositional and professional choices. Rather, in order to appreciate how deeply his musical scores resonated with his audience, one needs to look at the lives of individuals in that audience, lives in which Handel participated. Knowing about his friends, and in particular the friends to whom he left bequests in his will, extends our knowledge of Handel in his world and furthers our understanding of his music in the society for which it was written. Marriage, friendship, medicine, law, commerce, public relations, finance, religion, and politics all play a part.

This is not to say that Handel depicted his friends in his music, only that they offer an example of the public for whom Handel composed, and as such also served at times as a private sounding board for his new compositions. Handel’s operas set in the Middle East (Rinaldo, Tamerlano), for example, would not have seemed remote to James Hunter, who was an international trader and later in life worked directly with the British East India Company. The tension between a forced marriage and true love (Floridante, Imeneo) was not limited to exotic or fantastical climes but common to many: Mary Delany had both experiences. False accusations and legal problems (Solomon, Susanna) plagued Delany and her husband, while Hunter and Goupy both endured long court battles. Issues of religious toleration (Esther, Judas Maccabaeus, Theodora) touched them all.

Ellen T. Harris is professor emerita at the Massachusetts Institute of Technology and incoming president of the American Musicological Society. Her previous book, Handel as Orpheus: Voice and Desire in the Chamber Cantatas (Harvard UP, 2001), was awarded the 2002 Otto Kindeldey Award from the American Musicological Society and the 2002-03 Louis Gottschalk Prize from the Society for Eighteenth-Century Studies.

Email ThisBlogThis!Share to TwitterShare to FacebookShare to Pinterest
Labels: Handel