The giants of the early music movement of the 1970s have reached their golden years, a fact brought home in the last couple years by the passing of  Gustav Leonhardt and Christopher Hogwood. One of them, viola da gambist and conductor Jordi Savall, 73, shows no signs of slowing down. His discography, already burgeoning with over 100 recordings by his various ensembles and other combinations, continues to grow apace each year. Savall is not only a musical luminary, though. Many of his concert programs attempt to foster peace and mutual understanding in conflicts between national and religious enemies. His example of humanist pacifism, which goes beyond mere words into actions, is an inspiration to many around the world.

That includes in his native Catalonia, where he continues to be a calm but steady voice for the movement toward independence from Spain. This month he joined with Josep Carreras (the Catalonian opera singer who used to style his first name as José) and four other public figures to issue a public call to allow an independence referendum in Catalonia to proceed on November 9, which the Spanish government declared illegal at the end of September. In gratitude for all he has done for his homeland, the Generalitat of Catalonia recognized Savall with its highest honor, la Medalla de Oro, earlier this week.

The recorded legacy of Jordi Savall dates back to the 1970s, in albums he made with La Petite Band and the Ricercare-Ensemble für Alte Musik of Zurich. In the same decade, he started his own small early music ensemble, Hespèrion XX (the number now increased by a century change to XXI), to be complemented in the late 1980s by a choral ensemble called La Capella Reial de Catalunya and a Baroque orchestra called Le Concert des Nations. With these groups, Savall has made reference recordings of major works of music history, including Monteverdi’s Vespro della Beata Vergine and opera L’Orfeo; J. S. Bach’s orchestral suites, Brandenburg concertos, Art of Fugue, Musical Offering, and B-Minor Mass; Handel’s Water Music and Music for the Royal Fireworks; Purcell’s Fairy Queen; and Mozart’s Requiem Mass.

As good as some of those recordings were, the many smaller recordings, bringing together wisps and strands of forgotten repertories, are perhaps more memorable and deserving of praise. My research for this appreciation of Savall’s work began with gathering together all of the recordings I had purchased, received, and written about over the years. It formed an impressive pile, but I was hardly surprised, upon further examination, that I had barely scratched the surface. From medieval chant and troubadour songs to Renaissance polyphony and villancicos, from courtly European dance music to folk song from France and Turkey and the Balkans, from Vivaldi’s operas Teuzzone and Farnace to Haydn’s Seven Last Words (recorded in the church of Santa Cueva in Cádiz, where the score was premiered) and even Beethoven, Savall has recorded it.

Fortunately, for the listener who wants to get a more complete idea of what Savall has accomplished on record, Savall made the savvy decision to start his own record label, Alia Vox, which keeps all of the titles, past and more recent, in circulation. Savall and his musicians were not the first to take the matter of distributing their recordings into their own hands, an honor that falls to the Tallis Scholars, who established their Gimell label in 1980. Even so, they were early implementers in the self-publishing boom, inaugurating Alia Vox before Philip Glass’s Orange Mountain Music, the London Symphony Orchestra's self-titled label, and John Eliot Gardiner’s Soli Deo Gloria. Alia Vox was a family affair, undertaken with his creative muse and wife, Montserrat Figueras, who died in 2011. The goal was to spread the music, rather than make a profit, but from its founding in 1998 until 2005, according to the company's Web site, it sold more than two million discs.

Rather than focusing on the work of single composers, which would make it easier for me to file his recordings in my collection, Savall has long favored historical mélanges. A Savall disc uses music to illustrate history, bringing together works that can be associated with a single influential ruler (Isabella I of Spain, Emperor Charles V, Alfonso the Magnanimous, Louis XV), a city or region (Istanbul, Jerusalem, the Balkans, the Mediterranean), or musical form (ostinato bass, villancico).

For his most significant research projects, Savall has turned to a new type of record packaging, the CD-Book, where extensive background information is marshaled into a hardbound book format, with the CDs tucked into pockets under the covers. (These books are usually in fiendishly tiny print, because all of the texts are translated into several languages, with Catalonian, pointedly but diplomatically, alongside Castilian, what most of the world would call Spanish.) Some of my favorites include the CD-Book dedicated to Erasmus and his book In Praise of Folly; a chronological tracing of music associated with members of the Borgia family; music for and about the life of Joan of Arc; and an exploration of the “forgotten kingdom” of the Cathars, wiped out by the Albigensian Crusade. 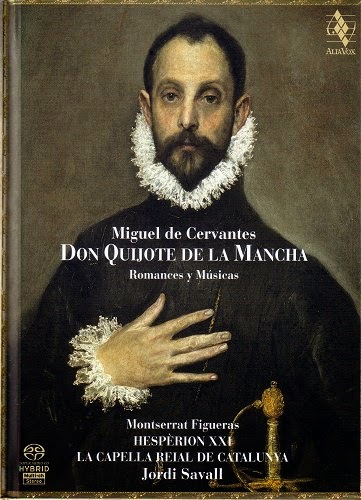 Perhaps no Savall project quite incarnates his cross-disciplinary leanings as much as the CD-Book Don Quijote de la Mancha: Romances y Músicas. Recorded in 2005, to coincide with the 400th anniversary of Don Quixote, this set attempted to provide a musical soundtrack for the book, interspersed with readings from the novel. Every time that Cervantes mentions music being performed, which is quite often, Savall found the actual piece referenced by Cervantes or, when that was not possible, something from the period that was appropriate for what is described in the novel. The result enriches readers of the novel and listeners of the music alike.

Savall has even larger aims for his work, as he told Bertrand Dermoncourt in an interview for L'Express in 2011. He spoke about a recording project that brought together Israeli and Palestinian musicians (my translation): "Conflicts remain and we felt them during our projects reuniting musicians from different backgrounds, from countries that politics divided. Tension was palpable in the first rehearsals. Then we were surprised by Israelis and Palestinians having fun singing the same songs together during breaks. Nothing and no one made them do it. It was the power of music: it can bring peace because it forces you to converse and respect one another."

Charles T. Downey runs a thriving blog (est. 2003), freelances for the Washington Post, and teaches music and art history at St. Anselm's Abbey School. He holds the M.A. and Ph.D. degrees in musicology from the Catholic University of America. Downey's “Meet the Moderator” page is HERE.