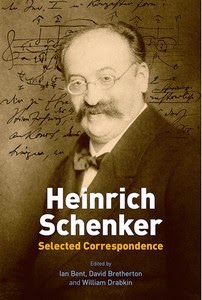 Heinrich Schenker: Selected Correspondence, ed. Ian Bent, David Bretherton, and Willliam Drabkin (Boydell Press, 2014), is the product of a long-established Schenker documentation project and comprises an extensively annotated selection of letters written by or to Schenker, with linking passages from his diaries.

The 450 letters offered here, an extension of the scholarship that has gone into SDO, are published in English; they have been translated and annotated by a team of twelve scholars based in the UK, the USA, Austria, and Germany. They are presented by topic and theme, in a broadly chronological arrangement, with a substantial historical preface and introduction.

The volume is thoroughly indexed by name and subject. Its 544 pages of text are supplemented by 16 pages of plates, which give sample images of handwriting, drawings and photographs of correspondents, cartoons, and a title-page from one of Schenker¹s published compositions. The book will be on display at the joint annual meetings of the American Musicological Society and the Society for Music Theory in Milwaukee in November. A book launch in London is also envisaged.

William Drabkin is Professor of Music, emeritus, at the University of Southampton. Webpage HERE.