by Carol A. Hess


Among the many things World War I left in its wake is an impressive and diverse body of musical works. The first commercially successful antiwar song in history, Al Piantadosi’s “I Didn’t Raise My Boy to Be a Soldier,” enjoyed fleeting popularity in the United States between the outbreak of war in August 1914 and the sinking of the Lusitania the following spring. It also gave rise to the parodies “I Didn’t Raise My Boy to Be a Coward” and “I Didn’t Raise My Dog to Be a Sausage,” as U.S. Americans increasingly came to favor military involvement in Europe; drowning out antiwar music even more vociferously was George M. Cohan’s widely performed “Over There!” Charles Ives marked the sinking of the Lusitania with “Hanover Square North, At the End of a Tragic Day, The Voice of the People Again Arose,” the third movement of his Second Orchestral Set. He also composed two songs, “Tom Sails Away” and “In Flanders Fields,” the latter on the poem dashed off by the Canadian surgeon Lieutenant Colonel John McCrae after the death of his friend Alexis Helmer in May 1915. In fact, the “crosses row on row” in the cemetery just north of Ypres (Belgium) that McCrae immortalized were an entirely makeshift affair. Proper headstones were supplied to the Commonwealth cemeteries only in the 1920s and inscriptions cost 3½ pence per letter, excluding the poor. Thus the common soldier was snubbed even in death.

The war also inspired European musicians. Brisk or uplifting popular songs such as “Pack Up Your Troubles in Your Old Kit Bag” and “Keep the Home Fires Burning” bucked up the spirits of British troops. Hindemith, who began serving in the German army in 1917, formed a string quartet with some fellow soldiers (and in March 1918 learned of Debussy’s death while the ensemble was playing the French composer’s music). In the turbulent decade that followed the war, Alban Berg’s opera Wozzeck gave anguished voice to the newly coined term “shell shock.” 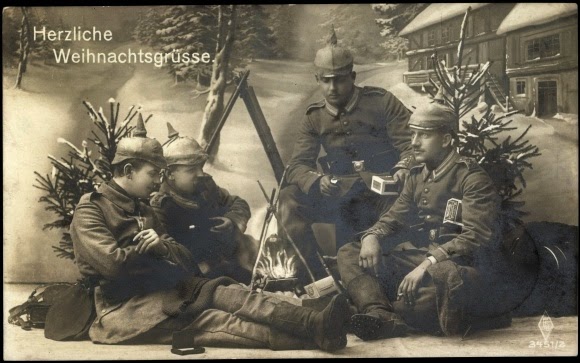 One especially compelling “performance” took place on Christmas Eve, 1914, on the Western Front, a soggy patch of earth in Belgium and Northern France defined by the narrow strip known as no-man’s land. Months earlier, ebullient troops were convinced that the war would be over “before the leaves fell.” Now, amid the mud and monotony, optimism was fading. Pope Benedict XV’s proposal for an official Christmas truce had fallen on deaf ears. The common soldier on the Western Front lived in a dark trench surrounded by sandbags and excrement, where disease threatened no less than enemy gunfire. Ironically, maintaining proper belligerence in these surroundings proved difficult, mainly, it seems, because human beings instinctively prefer to get along with their neighbors. The enemy in the next trench was often so close by that his coughing could be heard. So, too, could his singing, whether of “Deutschland über Alles” or “God Save the King.” Enemy soldiers would exchange good-natured insults with “less venom than a couple of London cabbies after a mild collision,” as Rifleman Leslie Walkinton of the Queen’s Westminsters recalled. Commanding officers were quick to scold the men for fraternization, correctly believing that it eroded the single-minded enmity war demanded. On Christmas Eve, however, the men defied their higher-ups, calling an unofficial halt to the hostilities in what Stanley Weintraub has called “an outbreak of peace.”

Probably the Germans started it. It was they, after all, who were bent on defending Kultur, a point articulated by no less than Rainer Maria Rilke and Thomas Mann. In the days before Christmas Eve they plucked small evergreens from the Belgian woods and arranged them along their trenches, singing “O Tannenbaum” as well as patriotic songs. On 24 December, eighty yards away from the German trenches, Captain Sir Edward Hulse of the Scots Guards decided that “from 10 p.m. onwards we are going to give the enemy every conceivable song in harmony, from carols to Tipperary.  . . . Our object will be to drown the now too-familiar strains of ‘Deutschland über Alles’ and ‘Die Wacht am Rhein’ we hear from their trenches every evening.” Hulse and his men began singing and soon cries of “Fröhliche Weihnachten, Tommy!” and “Happy Christmas, Fritz!” rang through the frosty air. At one point, someone ventured into no man’s land and, seeing that no trouble ensued, other soldiers left their trenches to swap cigarettes for beefy bully or chocolate for sausage. Throughout, the men sang.

Since 2008, the male vocal ensemble Cantus has toured with its show “All is Calm,” a reenactment of these events. The Minneapolis-based a cappella group comprises five tenors (divided 3 + 2 or 2+ 3), two baritones, and two basses. (Unlike Chanticleer, Cantus uses no male sopranos.) Just as Hulse proposed, Cantus performs a wide range of songs—“It’s a Long Way to Tipperary,” “God Save the King,” “We Wish You a Merry Christmas,” and other traditional carols. There was also “The Old Barbed Wire,” a wry allusion to the British attack at Ploegsteert Wood days before, which resulted in such massive casualties that cadavers were impaled on barbed wire and left there. Other selections include “Minuit, Chrétiens” (O Holy Night), which the French tenor Victor Granier evidently sang to the amazement of all. (Walter Kirchoff, a German tenor invited by Crown Prince Wilhelm, performed for the 130th Würtembergers and within earshot of the French, who gratefully applauded.)  Cantus sings not only the German classics “Es ist ein Rös Entsprungen” and “Wie Schön Leuchtet der Morgenstern” but the very songs of which Sir Edward complained, including “Die Wacht am Rein,” which, not two decades hence would tangle with the “Marseillaise” in that famous contrapuntal clash in the World War II film Casablanca. “All is Calm” is conceived as a radio drama. In addition to the superbly executed music, three actors read—in an impressive variety of accents—excerpts from letters and diaries of soldiers who described the event, often with wonderment. (The CD the group has released contains the music alone.) The timbre and quality of the spoken voices shift in fluid counterpoint with the musical selections: matter-of-fact, homespun musings glide into poetic effusions by Siegfried Sassoon of the Royal Welch Fusiliers and Wilfred Owen of the Manchester Regiment, whose verses Benjamin Britten would set in his War Requiem. At the conclusion of each reading, the actors identify the combatants by name. This oral footnote honors a handful of participants in what was surely the most impersonal war to date, emblematized by the gray and khaki uniforms of modern warfare and the ghoulish gas mask, first put to use just months after the truce. All the while, the nine men of Cantus sing, just as in 1914. They stop only for the Last Post, the sounding of a solitary trumpet call still observed in Ypres at 8:00 p.m. every evening.

All this has great potential for mawkishness, even in the face of the terrible events commemorated. Melodrama, a staple of early radio that involves speaking over music, might strike some listeners as corny. One could also quibble about a few details. The Menin gate at Ypres, where the Last Post is observed, is not a medieval structure, as the narrator states, but a triumphal arch built in 1927. Perhaps the Belgians could be given greater recognition, as could the colonial troops from India and Africa, who had fought so bravely at the battle of the Marne months before. To them, Christmas meant little, even if the lighted trees might have reminded some of the Hindu Diwali festival, a fertility rite celebrated with a profusion of oil lamps. Likewise, an overly rosy picture that overlooks the pockets of sniper fire along the lines that Christmas Eve should also be avoided. Still, “All is Calm” raises fascinating questions. If, as Weintraub suggests, the truce itself was “dangerously akin to the populist politics of the streets,” then the sing-along that arose spontaneously from the trenches that Christmas Eve symbolizes a broader spirit of rebellion, one not confined to a single, exceptional moment in a vast, sweeping tragedy. One wonders how we might react to “All is Calm” were it performed not with the polish and nuance of the Cantus singers but with untrained voices, with average men straining for high notes and struggling to remember all the verses to “Silent Night,” as generations of amateur singers have done.

“All is Calm” moves the listener through superb musicianship and a compelling array of materials, music and literary. Ultimately, all serve the broad and haunting question, “What if?” What it peace had broken out? What if the truce had been repeated in subsequent years of the war? For indeed, the order against any future fraternization came down swiftly and unequivocally, and the songs of Christmas 1914 were silenced. Four years later, when that strange night was little more than a curious memory, military and civilian dead and wounded totaled thirty-seven million due to what some still call the Great War.


Glenn Watkins, Proof Through the Night: Music and the Great War (University of California Press, 2003).

Carol A. Hess is Professor of Music at the University of California, Davis. Her most recent book, Representing the Good Neighbor: Music, Difference, and the Pan American Dream, was published by Oxford University Press in fall 2013.