In January 1915, the American seminary professor Waldo S. Pratt (1857–1939) coined the term “musicology” on p. 1 of the inaugural issue of The Musical Quarterly. Musicology had existed conceptually and been practiced (in some form or another) long before his article “On Behalf of Musicology” appeared in print. But Pratt was the first to define the term in the English language as well as one of the earliest figures to campaign for its existence as a legitimate field of “scientific” inquiry in the United States.

Revisiting the article today, it is quite remarkable just how forward-thinking, even proto-New Musicology-ish sounding his discussion reads in some passages. This is particularly palpable where he characterizes musicology as a discipline open to engaging with a virtually infinite field of reference points:


“The world of music” [...] is extremely complex. It includes both subjective experiences and objective things, facts, principles, laws, processes, products, utensils, creators, organizations, institutions, powers, ideals. Any or all of these may be taken as topics of scientific scrutiny, and such scrutiny ought to yield something toward the building up of a comprehensive “science of music.” Here, then, we may expect to find the field of “musicology” (4).

In reality, the discipline Pratt helped bring into existence hardly set out to produce ideologically sensitive “institutional analyses” in the vein of Georgina Born—this would take generations to achieve. Yet I suspect that most readers today still find that his discussion resonates with present-day debates regarding the purpose and subject-orientation of musicology within the academy. (Indeed, an email thread I received this morning reminds me there is still considerable internal speculation as to what generally constitutes musicological practice.) Given how radically the discipline has shifted focus over the past decades (let alone the last century), one might be forgiven for believing that “what goes around comes around.”

You can judge the merits of Pratt's essay for yourself by following the link below to America's oldest-running scholarly musical journal, The Musical Quarterly, which also celebrates its centenary this very month. 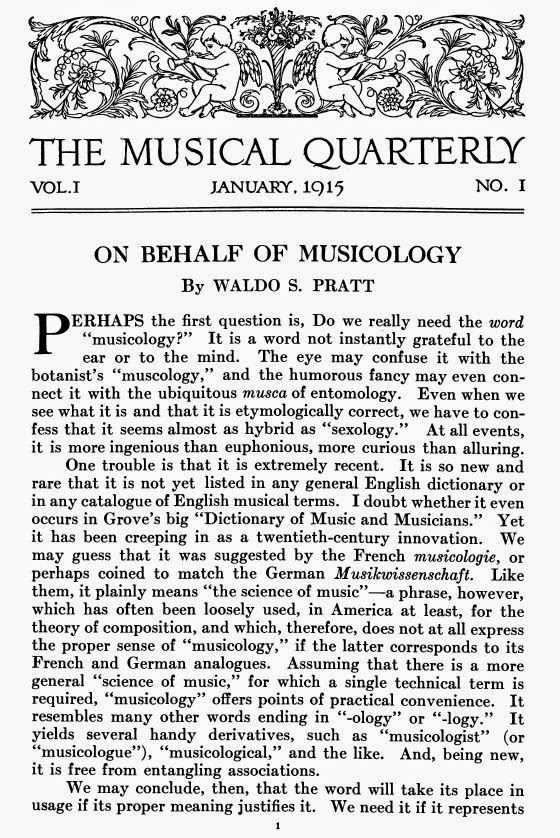 Before you do, it’s worth considering a fascinating biographical point that potentially sets matters within the wider historical framework in which Pratt's article appeared and was subsequently disseminated. (We should recall, of course, that the term “musicology” struggled to take root in America and wasn't acknowledged by universities as a full-fledged subject until after the Great Depression.) Unlike his American contemporaries in the field who received extensive vocational training in musicology abroad (in Germany, Austria, and France), Pratt never had the opportunity to travel outside of the United States. Nevertheless, his article demonstrates a conversant familiarity with the latest trends and definitions of musicology in Europe, particularly those of Guido Adler and Hugo Riemann. But that's not to say his article necessarily reads as a manifesto against such definitions. The article comes across as an honest and original attempt to frame the discussion around a newly coined term. Indeed, it’s a fresh and consistently hopeful advocacy "on behalf of musicology” from someone standing outside the academy.

While Pratt’s unconventional vocational path makes for fascinating study, it's perhaps the wider historical context of 1915 hovering faintly in the background that is ultimately decisive. The First World War had erupted the summer before his pioneering article appeared - perhaps, we might speculate, even while it was being drafted. As the historian Adam Tooze has recently discussed in his magisterial book The Deluge: The Great War and the Remaking of Global Order 1916–1931, the war cataclysmically shook the institutional foundations of Pratt's (albeit much more pedigreed, resourced and organized) European counterparts to their core. Although American musicology would always be indebted to these roots, it would often be marked by a self-conscious awareness of an intellectual rift between Old- and New-World conceptions of the discipline. This was especially true during fundamental changes to musical thought and scholarship in the early 1960s and late 1980s.

A century now gone by, the American Musicological Society, which Pratt lived to see established in 1934, has become the world's largest, most active and (arguably) intellectually diverse scholarly organization devoted to the study of “musicology.” Whether a certain restlessness about its intellectual heritage was already latent in 1915 remains a question open to future research.

NOTE: More on Waldo Pratt in our next blog post.

Matthew Werley received his doctorate in musicology at the University of Oxford (under the supervision of Peter Franklin) and is currently a tutor in music at the University of Cambridge. His research on Austro-German opera has been supported by several DAAD grants, and his publications include, among other things, the entry on “musicology” for the four-volume encyclopedia Music in American Life (Greenwood, 2013).