Percy A. Scholes notes his death:


WALDO SELDEN PRATT, on July 31 [1939], at the age of eighty-one. He began life as an Egyptologist. From 1880 to 1882 he was Assistant Director at the Metropolitan Museum of Art, New York. From 1882 to 1917 he was Professor of Music and Hymnology at the Hartford Theological Seminary, Connecticut, holding also various other academic positions and organist-ships—really a very versatile man, as well as a sound and deep scholar. His History of Music is well known, as also his New Encyclopedia of Music and Musicians. With Dr. Charles N. Boyd as junior colleague he served as American Editor of Grove's Dictionary. On everything connected with hymnology he was an acknowledged authority, and his writings on Ainsworth's Book of Psalmes, 1612 (entitled The Music of the Pilgrims, Boston, 1921) and The Music of the French Psalter of 1562 (Columbia University Press, issued this year) are valuable and thorough studies. Probably few members of the Musical Association remember that forty-four years ago a special summer meeting was held (July 16, 1895) under the chairmanship of Sir John Stainer, as President, to receive a party of American musicians, and that the Proceedings of the Association for that year include a very thoughtful paper on “The Isolation of Music,” read by Prof. Pratt.

In The Musical Quarterly (again), an essay by Otto Kinkeldey—perhaps the longest obituary ever written about a musicologist. Two excerpts:


When Waldo Selden Pratt was called to his reward last July in his eighty-first year the community of scholars, particularly the fellowship of musicologists in America, was bereft of one of its proudest ornaments. The loss was so much more keenly felt as the length of his devoted service to the cause of music, of musical scholarship and music teaching exceeded that of his generation. He had outlived that little group of laborers in music's vineyard, who, at a time when thoughtful teachers of music were beginning to realize the need and the advantages of organized co-operation, dedicated the best efforts of their lives to making that co-operation fruitful. And he outlived that still smaller group which was the first in America to devote its joint labors to musical research, and which slowly but decisively convinced the musicians and the music-lovers of America that, in this field also, sincere and honest endeavor might bring forth fruits meet for grateful recognition and acceptance as true contributions to the musical heritage of the nation.

These were activities which brought Pratt into contact with a wide general musical public and made his name known throughout the length and breadth of the land—known and respected and loved. But of this wide general public comparatively few knew of his long and continuous service of forty-three years as a teacher of church music, of hymnody and hymnology, of liturgics and of “public worship” at the Hartford (Conn.) Theological Seminary. No bright light of public attention streamed over these years of loving labor. But here his influence was more personal and direct. Here the steadfast, sincere, deeply religious nature of the man enabled him to sow seed whose perennial flowering will not fail for many years to come.

Pratt's career was not like the well-planned conventional activity of the scholar, the artist or the professional man in any of the callings that have a well-recognized place in the professional or educational world, with a foundation and a background of long European and American standing, with a course of preparation and training crystallized through successive generations. In many of his activities he explored new territories-new at any rate for America. He opened new paths and kindled new beacons for his American contemporaries and his younger disciples. In the field of practical music he was to a great extent autodidact. And in scholarship his early training was not that of a musicologist, consciously striving towards a goal which he saw clearly from afar. He never had the advantage and the inspiration of even a few years of preparatory study in Europe, such as fell to the lot of so many American musicians and musicologists. He was truly a product of his native soil, and perhaps he brought more honor to his country than it bestowed upon him.


Pratt's last years were spent in quiet retirement but not in idleness. After the cessation of his active work at the Hartford Seminary he rarely left his Winter or his Summer residence. His time was spent at his home in Hartford, or, as soon as mild Spring weather made it possible, at the Inn in Pomfret Center, Connecticut. In Pomfret, General Israel Putnam of Revolutionary fame had had his home. And through his mother Pratt was related to the Putnams. Here he would do his reading, writing and proof- reading, and, until Winter threatened, would drive about in his old motor car for relaxation in the far-spread or gently rolling green fields of Windham County. The meetings of the M.TN.A. and other societies saw him no more, although he kept himself well-informed as to what was going on. In his later years he developed a kind of mild agoraphobia. He avoided carefully any situation in which he might find himself in a place where many people were gathered, particularly if he thought he would be expected to “make conversation” or indulge in idle social talk.

This was particularly so after 1935 when he lost his beloved wife, whom, as Mary Elizabeth Smyly of New York, he had married in 1887. Theirs had been a happy union, although it was saddened by the early loss of their only child. Up to the very end his mental faculties remained alert and active, and even the ordinary physical burdens of old age seemed to rest not too heavily upon his shoulders. His last Summer was begun as usual at Pomfret. Shortly before the end of July he began to feel indisposed. He was taken back to Hartford where death came to him peacefully two days later on July 29, 1939.

The quiet end rounded out a peaceful life. No startling brilliance marked his career. No modern notoriety ever threatened the dignity of his calling or the nobility of his living. The number of those who mourn his loss is, perhaps, greater for that very reason. If modesty, charity, kindliness and devout living are the marks of a great soul, here was one that was truly great. 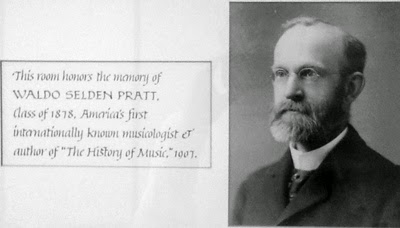 Elsewhere on the Web

Music of The Pilgrims (Boston, 1921; for the 300th anniversary of the psalmbook brought to Plymouth in 1620) at IMSLP (Princeton Theological Seminary copy)