Trippett, Wagner, and the Leverhulme Trust 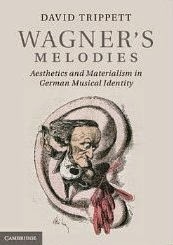 The Philip Leverhulme Prize recognizes the achievement of an outstanding researcher whose future career is exceptionally promising and who has already attracted international recognition. The purse is £100,000. The citation reads:


“David Trippett has already gained international recognition for his highly innovative approach to the history of nineteenth-century music. His prize-winning study of Wagner’s melodies confronts some of the basic issues of musical aesthetics, while at the same time setting them securely within the cultural context of their times. Not only does he examine the different ways in which Wagner’s contemporaries wrote about the effects of melody; he also shows how their views engage with some of the fundamental scientific questions of the day, and specifically those that relate to the bodily senses and the human capacity for speech. This is indeed path-breaking research. Dr Trippett  lays out a new agenda for the writing of musical history, in which he himself seems well placed to assume a leading role.” [Award brochure HERE.]

The first Viscount, there, was no mean figure. One of the Lever Brothers of soap fame (Lux, Lifebuoy, Breeze), he developed one of the first international empires of consumer goods; in 1930, shortly after his death, it merged with a Dutch margarine concern to become Unilever, an early international conglomerate that today claims its products reach 2 billion people every day. The trust was formed in 1925 as a provision of Lever's will, to offer "scholarships for the purposes of research and education."

Wagner's Melodies also won last year's Donald Tovey Memorial Prize of the University of Oxford, and was cited as one of several notable music books published in 2013 by Alex Ross in his blog, The Rest is Noise. Previous work by Trippett earned the Alfred Einstein Award of the American Musicological Society and, in 2013, both an ASCAP Deems Taylor Award and the Bruno Nettl Prize of the Society for Ethnomusicology.

The AMS Lewis Lockwood Award, endowed in his honor by friends and admirers of Prof. Lockwood, honors each year a musicological book of exceptional merit published during the previous year (2014) in any language and in any country by a scholar in the early stages of his or her career who is a member of the AMS or a citizen or permanent resident of Canada or the United States.The 2014 citation reads:


This year's Lewis Lockwood Award goes to a book that is truly interdisciplinary in scope, integrating methods and fields as diverse the history of science, philosophy, music theory, linguistics, and psychology, bringing these resources to bear on a topic that is at once central to the history of music, and yet curiously elusive: that of melody. Although melody has been called the soul of music, it has escaped any sort of precise definition and resisted any rigorous theoretical formulation. The composer whose melody this book considers is none other than Richard Wagner, who valorized melody as much as anyone in the nineteenth century, even as critics accused him of lacking any sort of melodic gift. The book explores these tensions; in the process it greatly expands our understanding of Wagner's complex cultural position, while also transforming our understanding of his music in important ways. The award goes to David Trippett, for his book Wagner's Melodies: Aesthetics and Materialism in German Musical Identity.

AMS member David Trippett holds the Ph.D. degree in musicology from Harvard and is Lecturer in Music at the University of Bristol—also an active professional pianist. Read more about him at his [very impressive] WEBSITE.