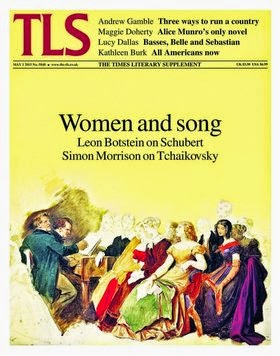 The cover of this week's Times Literary Supplement (1 May 2015) features content from American musicologists Leon Botstein and Simon Morrison under the (not especially apt) headline “Women and song.”
Botstein's article, the lead, reviews two recent books on Schubert: Graham Johnson, Franz Schubert: The Complete Songs (Yale UP, 2014); and Ian Bostridge, Schubert's Winter Journey: Anatomy of an Obsession (Knopf, 2015). Botstein recalls a time, according to the TLS blurb “when this composer [like Tchaikovsky] was a conservative favourite, ‘the stolid schoolteacher’s son, poignantly disappointed by a search for the love of a woman,’ an image confronted through careful scholarship with ‘evidence of hard drinking and carousing’ [and] the possibility that he might have been homosexual.”

Morrison's essay (p. 14) is titled “Waist-Deep: In the Mire of Russian and Western Debates About Tchaikovsky”—a subject he also approached in a video for this blog. He considers the question “Who made the genius gay?” after an article published last November in the semiofficial arts and politics newspaper Kul’tura. And to what ends?

The complimentary online version, titled “In Bed With Tchaikovsky,” is HERE.

Simon Morrison is professor of music at Princeton University. His most recent book is Lina and Serge: The Love and Wars of Lina Prokofiev (London: Random House, 2013; author Q&A HERE). “Emperor Putin's War on the Truth” appeared in the New York Times on 2 October 2014.

Leon Botstein is president of Bard College, a position he has held since 1975. He is also Bard’s Leon Levy professor in the arts and humanities. In addition to serving on a number of boards, he is the musical director and principal conductor of the American Symphony Orchestra, and conductor laureate of the Jerusalem Symphony Orchestra.