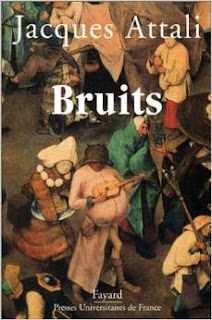 Few books have had as significant an impact on music and sound studies in the past thirty years as Jacques Attali’s Noise. Musicologists, ethnomusicologists, scholars of popular music, media theorists, sound studies scholars, cultural theorists, and countless others have drawn inspiration from Attali’s call for music and noise to be resituated from the margins to the center of social life. But there is something curious about the impact Attali’s book has had on Anglo-American scholarship. This point was driven home to me a few years back, when I was having a drink one night with a French colleague, Jedediah Sklower, in a café in the Belleville district of Paris. When the subject of Attali’s book came up, Jedediah expressed incredulity at the enthusiasm with which the book had been embraced outside France. What, he wondered, could possibly explain the enormous influence that Noise has exercised abroad?

I imagine that part of his puzzlement was motivated by the strange trajectory of Attali’s political and intellectual career in France since the first edition was published in 1977. It is no exaggeration to say that nowadays Attali is one of the most visible public intellectuals in France. But he is also one of the most controversial. Particularly on the left, Attali is regarded with a mixture of derision and contempt, seen as an exemplar of the sort of neoliberal thinking that mistakes the liberation of entrepreneurial energies for human liberation tout court. One author has even coined a neologism, le jacquattalisme, to describe the kind of Pollyannaish belief-system Attali’s present-day thought embodies. According to the tenets of jacquattalisme, all the social problems, ecological catastrophes, and human suffering caused by the global flow of capital will be remedied by the same economic forces that created them in the first place. And if neoliberal capitalism hasn’t sorted these issues out already, we are assured that its much vaunted market-based solutions simply need a little more time to work their elusive—which is to say illusory—magic.<1>

I’ve long shared Jedediah’s perplexity regarding the distance separating the status Attali’s work enjoys in Anglo-American academia and that which it is accorded in France. It was this perplexity that led me to write the critical reassessment of Noise and its legacy that appears in the summer 2015 issue of Critical Inquiry. To make sense of this riddle required an unpacking of the book’s political and ideological commitments, situating them in the context of debates taking place within the French left at the time of its publication. And of all the commitments that needed unpacking, the most significant was Attali’s anti-materialism, his inversion of the classic Marxian model that holds ideas, beliefs, and culture—including music—to be subordinate to economic relations. Famously, for Attali, music has a leg up on the economy, to the point that it is possible to hear in its sonic patterns presentiments of future social orders. Furthermore, the engine driving this forward movement of history is the noise referenced by the book’s title, which in politics as well as music represents a force whose disturbance of a prevailing socio-musical order lays the foundations for the one that will succeed it.

What is revealed by a reconstruction of the sociohistoric context to which Noise responded is that Attali's assertion that music is "ahead of society" was less a hypothesis to be tested and perhaps verified, than a stake in a political struggle whose outcome would have enormous consequences for the future of France. Also revealed is the extent to which our embrace of Attali's theses has involved a misreading of the politics that animated them. To be sure, this has proven to be a productive misreading. But it is one whose disclosure raises questions we can no longer afford to ignore. What kind of ideological work do we perform in adopting for our own purposes Attali's anti-materialist theses, no matter how comforting a picture they paint of music's social significance? And to what extent can noise still be said to possess the disruptive potential Attali ascribes to it in an age when the greatest force for disruption is the reigning market system itself?

Eric Drott is Associate Professor of Music Theory at the University of Texas, Austin, where he is head of the Division of Theory/Composition. His research focuses on contemporary music culture, avant-garde movements in music, French cultural politics, and the sociology of music. His Music and the Elusive Revolution (University of California Press, 2011) examines music and politics in France after May ’68, in particular how different music communities (jazz, rock, contemporary music) responded to the upheavals of the period.

<1> Frédéric Lordon, “Avec Thomas Piketty, pas de danger pour le capital au XXIe siècle,” Le Monde Diplomatique (April 2015), pp. 19–20. Another anecdotal piece of evidence testifying to the animosity Attali’s work is capable of generating occurred last Thursday at a study day I attended at the Bibliotheque Nationale de France. At one point during a round-table discussion on the history of independent record labels in France, an invited speaker described Noise as “the stupidest book on music” ever written (“le livre le plus con sur la musique”). Judging from the response this remark garnered among attendees, he is not alone in feeling this way.