by Danielle and Eric Fosler-Lussier 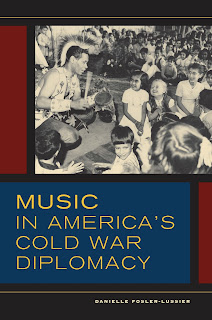 During the Cold War, thousands of musicians from the United States traveled the world under the sponsorship of the State Department's Cultural Presentations program. This program was not straightforward political propaganda, though it certainly supported U.S. government objectives. The musicians built relationships both musical and personal. By their presence and their performances, they also offered audiences evidence of America’s improving race relations, excellent musicianship, and generosity toward other peoples. Some of their stories are detailed in Danielle's new book Music in America’s Cold War Diplomacy (University of California Press, 2015).

In researching the book, it became clear that the sheer quantity of data to be managed was unusual—at least in the context of musicology. The available archival record of the Cultural Presentations Program in the 1950s and ’60s amounts to hundreds of thousands of pages of documents about thousands of musicians and musical groups. Most of these sources are held at the National Archives at College Park and in the Special Collections Division of the University of Arkansas Libraries. (Many more documents were discarded by the Federal government or remain in private hands.)

The existing documents include evidence about how the American performances were received by listeners, including translated press clippings and eyewitness accounts. This evidence was gathered for the State Department by people who worked in U.S. embassies and consulates: inevitably, it was filtered through American perspectives. To make the picture more complete, we would need detailed archival and ethnographic studies conducted in the places where the musicians played.

For this reason, it seems very important to help many other scholars discover portions of the data that relate to their own interests and expertise.

Danielle began pursuing this research using the approach she knows best—piecing together musicians’ stories and details about how the Cultural Presentations program worked from fragmentary facts recorded in the documents. The book tells these stories. Yet one cannot tell all the stories: there are too many, and they are too heterogeneous. One can only choose and analyze some exemplary case studies. This approach is useful for understanding the phenomenon as a whole and some of its details, but not sufficient for fostering further research.

For this purpose, Eric’s expertise in envisioning large amounts of data became critical. Together we have devised a database of cultural presentations—freely available online—that uses maps to make the musicians’ tours visible and offers information about archival sources pertaining to particular tours. 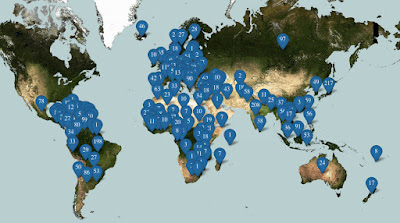 Our foray into digital humanities has challenged us to think about our data in new ways. The raw data of individual performances, originally encoded in a spreadsheet, took on new meanings once we started to display information spatially. We began to be able to connect performing groups, countries, cities, and time, and could ask questions about where and how resources were deployed. Now, for example, we could see a list of all musicians and ensembles who traveled to South Korea across a few decades, and notice which cities received musicians multiple times over this period. A collaborative effort between musicologist and computer scientist was needed to think about what information researchers might want from the data, and how to display information about tours and individual performances in space and time.

The development of the database interface required us to consider how to represent the data without distorting its historical context. Many former colonies gained independence during the period of time covered in the database: country names and boundaries were changing rapidly. How could we best present this historical data on the map, and how should users of the database be able to search for place names that have changed over time? In the end, we decided to organize the display according to current geography, but allow searching over all current and historical place names.

A database offers the user the illusion of completeness—but historical data cannot truly be complete. The U.S. government keeps only a tiny fraction (about 5%) of the records it generates, and we have not had the resources to survey all the surviving records. Performer itineraries were frequently revised several times before they traveled—and then they often deviated from the plan again during their trips in ways that were never recorded.

Simply entering these data into a spreadsheet therefore required choices. Because the quality of documentation varies widely, we do not have specific dates for all the performances. For some tours, we are reasonably certain about the listed locations of performances; but for most, we have had to decide whether or not to trust a source, to include or not include a particular piece of information. (The initial version of the database does not include specific performance dates, but only date ranges. We hope to specify dates more accurately in a later update.)

The limitations of the sources also informed our choices about how to display the data. We chose to display only the places of performance, and not the routes that could be inferred from the data, as the validity of those routes cannot be substantiated without further research.

We hope this resource will be understood not as a complete record, but as a point of access that opens many kinds of inquiry to its users. If the database serves a springboard for further investigation, it will have done its job.

The database can be accessed HERE.

Danielle Fosler-Lussier is Associate Professor of Music at The Ohio State University and the author of Music in America’s Cold War Diplomacy. She is grateful to the National Endowment for the Humanities, the Mershon Center for International Security Studies, and The Ohio State University College of Arts and Sciences for their support of this research. Publication of the book was also supported by the H. Earle Johnson Subvention of the Society for American Music and the Gustave Reese Endowment of the American Musicological Society.

Eric Fosler-Lussier is Associate Professor of Computer Science and Engineering and Associate Professor, by courtesy, of Linguistics at The Ohio State University.  His research investigates novel statistical methods for computer processing of speech and text.