After suffering through an endless string of jazz concerts ruined by overly aggressive sound men, I gave up entirely on live jazz and am spending the last part of my life going to classical concerts in Massachusetts, anything from Blue Heron’s Ockeghem to the Tanglewood Festival of Contemporary Music. Most often, I go to the New England Conservatory, where the professional and student music-making is routinely off the charts, ridiculous in the best sense of the word: Alisa Weilerstein giving a free concert with her parents, who are on the faculty; the BSO’s John Ferrillo as guest oboist in a historical performance of a Bach cantata that was one of the greatest musical experiences of my life; the NEC Philharmonia in Jordan Hall more or less outdoing the BSO at Tanglewood in their rendition of Brahms’s German Requiem. Last month (May), 19-year-old violinist In Mo Yang was still a member of an NEC student string quartet, despite having taken first prize at the Paganini competition in March. I marvel at all this stuff, and time and again I think, Gunther Schuller did this. He took a floundering institution and as its president (1967–77) turned it into a musical powerhouse. 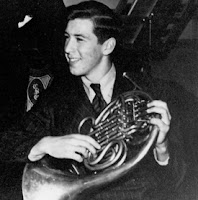 Born into a musical family in New York, Gunther Schuller was a prodigy on French horn. He first played with the New York Philharmonic at age 16. He was never important as a jazz instrumentalist—his claim to fame in that area was as a member of the brass section on Miles Davis’s historic “Birth of the Cool” tracks—but he loved jazz, he became deeply immersed in the scene, and he made pioneering contributions as an educator and musicologist, bringing the breadth of his talent and discipline to bear upon this newly evolving field.

In the late 1950s, after having taken Aaron Copland’s place on the composition staff at Tanglewood, Schuller founded the Lenox School of Jazz, a short-lived shadow jazz parallel to Tanglewood. He brought in many of the leading lights of jazz to teach jazz history, composition, and arranging in the Berkshires, and from the West Coast he brought in a little-known student who would turn everyone’s head around: Ornette Coleman.

In 1968 he published Early Jazz. Schuller believed passionately that the only way to write about a jazz artist was to listen first to every single available recording. This idea would become unwieldy for eras in which jazz recordings proliferated, but for Early Jazz it worked great. The book is filled with unprecedented insights. Schuller singlehandedly established the idea that jazz might be a topic for serious musicological investigation.

In 1971, through Vera Lawrence and William Russell, Schuller tracked down a copy of the Red Back Book, orchestrated versions of ragtime tunes. The following year he founded what would become the tremendously successful New England Ragtime Ensemble, which over the course of 25 years would provide professional careers for a cluster of those fabulous NEC students. So when Marvin Hamlisch got all the musical credit for The Sting and the worldwide popularization of ragtime, Schuller was not pleased.

We never met, except for one day in 1967 when he came over to our high school from San Francisco State College, to conduct his Meditation for concert band, and I feel unqualified to discuss his involvement in the avant-garde versus neo-classical wars. So I’ll break off here, and ask readers of this blog to celebrate other aspects of Gunther Schuller’s life and music. Leave a comment!

Barry Kernfeld edited the first and second editions of The New Grove Dictionary of Jazz (1988, 2001), the largest jazz dictionary ever published. Having concluded a long stint as staff archivist in the Special Collections Library at Penn State, he has returned to free-lance research, writing, and performance. And hoarding, he writes on his WEBSITE: “Some old men buy red sports cars; I keep acquiring more reed instruments.”