A Black Drummer in the
Seventeenth-Century Austrian Army


We repost Dr. Lorenz's fascinating study with his gracious permission and at the recommendation of John Rice. It appeared 22 July 2015 on Lorenz's blog, Musicological Trifles and Biographical Paralipomena.


In December 1652 Ferdinand III went to Regensburg to take part in the Diet of Regensburg, which was supposed to negotiate the unresolved issues of the Peace of Westphalia and resulted in the Youngest Recess of 1654. During their stay in Regensburg the Emperor and his wife Eleonora resided at the so-called “Bischofshof,” the residence of the prince-bishop of Regensburg, Franz Wilhelm von Wartenberg. Because the imperial couple's activities as godparents during their stay were recorded in the earliest surviving baptismal register of Vienna's Imperial Chapel in the Hofburg Palace, we know that in Regensburg Ferdinand and Eleonore each served twice as godparents: on 16 June 1653 Empress Eleonora, together with her stepson Ferdinand IV, stood godparent at the baptism of Eleonora, a daughter of Count Ferdinand Karl zu Löwenstein-Wertheim-Rochefort (1616–72) and on 15 November 1653, together with her husband, she served as goodparent of Sophia, a daughter of Maximilian, Prince of Dietrichstein. The Emperor's two godchildren during his stay in Regensburg were the aforesaid Princess Dietrichstein and a young man from Africa who on 10 August 1653, in the St. Michael's Chapel of the bishop's palace, was christened Ferdinand Christian by the Regensburg prince-bishop Franz Wilhelm von Wartenberg. It seems that this African had belonged to the entourage of one of the attendees of the Diet and Ferdinand III decided to take the young man under his protection.

On 10 August 1653.
The Moor Ferdinand Christian was baptized by the most honorable prince-bishop of Ratisbon Franz Wilhelm. As godfather officiated His Imperial Majesty Ferdinand III at the princely chapel in Ratisbon.

Ferdinand Christian took the family name “Ali” (a name that in 17th-century Europe was widely used for African people), he accompanied the Emperor to Vienna and became a hartschier and tympanist in the I. & R. Army. On 4 September 1661, in Vienna, Ferdinand Christian Ali married Elisabeth Keyblinger, the daughter of a baker from Steyr in Upper Austria. Interracial marriages were extremely rare in 17th-century Vienna. The entry in the records of St. Stephen's Cathedral concerning Ali's wedding is highly interesting, because it conveys the extraordinary impression that the groom made on the officiating priest. First, this source documents Ali's origin as “Borna in Mohrnlandt,” i.e. today's Negele Borana in Ethiopia's Oromia Region, where he was born around 1635–40. And second, right at the end of his entry, the priest describes the groom with the words: “Æthiops sponsus niger” (“the groom is a black man from Ethiopia”) and then—obviously being impressed by Ali's handsome physique—experiences a sudden poetic association and ads the words: “sed formosus." This of course is an allusion to a verse in the introduction of the Song of Songs: “Nigra sum sed formosa filiæ Hierusalem sicut tabernacula Cedar sicut pelles Salomonis.” (“I am black, but beautiful, O ye daughters of Jerusalem, as the tents of Kedar, as the curtains of Solomon.”) 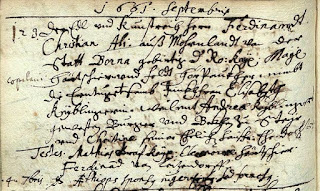 The noble and artful sir Ferdinand Christian Ali, born in the city of Borna in Ethiopia, His Roman Imperial Majesty's hartschier and field army tympanist, is taking as wedded wife the honorable and virtuous maiden Elisabeth Keyblinger, legitimate daughter of the late Andreas Keyblinger, former citizen and baker in Steyr, and Christina his married wife.
Witnesses. Mathias Graf, hartschier in the service of Empress Eleonora. / Ferdinand von Critzendorf.
1.2.3. [publications of the banns] I united them on 4 September. The groom is an Ethiopian black man but beautiful.

How did a black drummer in the I. & R. military in Vienna make the acquaintance of a girl from Upper Austria? Elisabeth Keyblinger was born on 8 February 1640 in Steyr, the daughter of the master baker Andreas Keyblinger and his wife Christina.


Around 1650 Elisabeth's family moved to Vienna where Andreas Keyblinger established a bakery in the suburb of Neustift. He might well have supplied the army with baked goods which brought his daughter into contact with her future husband, the black tympanist. The presence of Elisabeth Keyblinger's family in Neustift is well-documented. On 19 June 1667 her brother Andreas Keyblinger (b. 30 November 1641 in Steyr [Stadtpfarre 1, p. 488]) got married at St. Ulrich's Church (St. Ulrich, Tom. 2, fol. 108v, and A-Wd Tom. 23, fol. 268r). On 11 September 1652 Elisabeth Keyblinger's father died in Neustift and was buried on the following day in the St. Ulrich parish cemetery. 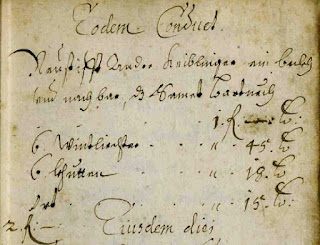 
I have not tried to figure out how the drummer Ferdinand Christian Ali and his family fared after 1661. This might be an interesting topic of research for other historians. I just wanted to show how in the seventeenth century the Austrian military was eager to make use of the skills of an African musician. 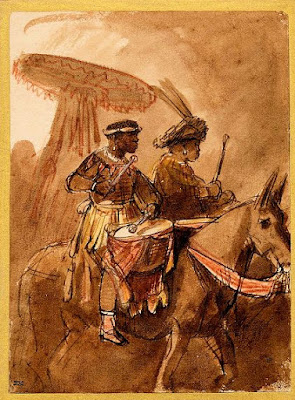 Michael Lorenz is a noted archival scholar of the Mozart-Haydn era, based in Vienna, homepage HERE.