Two years ago I published an article in Notes (69 [2013]: 671-87): “Documenting the Zenith of Women Song Composers: A Database of Songs Published in the United States and the British Commonwealth, ca. 1890-1930.” My intention was to call attention to my database of women song composers who published at least one song between the years 1890 and 1930 in the United States, Great Britain, and the countries of the British Empire. I also wanted to demonstrate some of the questions it could both raise and help answer. At the time it contained 15,400 songs and song publications by about 1600 women. That database, recently updated to 19,000 titles by 2500 women, is available HERE.

My database contains information about songs written in all styles, high, middle, and low: art music, popular theatrical and coon songs, and parlor songs, such as those by Carrie Jacobs Bond. It contains information on songs published in years that were clearly the peak decades for women songwriters. If a woman published a song between those years, I have included every song she published (i.e., also before 1890 and after 1930), so that a woman’s songwriting career can be traced from her first song to the last. Because I am documenting where a song was published rather than the nationality of the composer, I account for women like Cecile Chaminade, a French woman with an enormous following in London and in the United States, and Maria Grever, a Mexican active in New York and Los Angeles.

Since the expansion of my database on women composers did not cease with the publication of that article, I am bit by bit making my own publication progressively more and more out of date. All of the tables in the article were based on the database as it then stood, with 15,400 entries. The larger pool of data leads to several revisions, and presumably to a more accurate portrayal of the historical record. I turn to this forum to update a few of the points I made in that article.

The ascent to the current total of 19,000 titles by approximately 2500 women astonishes me. No less remarkable, of the nearly 2500 women listed in my database, 976 of them (nearly 40%) are present because they published a single song. In the US these were often self-published, either by the composer or poet, or a husband, father, or friend. Based on my online exploration of copyright records, I estimate that there are thousands more instances of women self-publishing. The situation in Great Britain was quite different for amateur women who published just one or two songs; these almost always appeared with established publishers.  These divergent cultural practices are a part of women’s history that the database makes visible.

More significantly, the database makes it possible to chart the dramatic rise and fall of women song writers that occurred during these decades. Two years ago the figures resulted in the following trajectory. 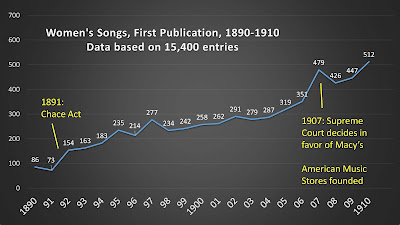 From fewer than 100 new songs published for the first time in 1890 and 1891, the annual totals climbed to more than 500 new songs in 1910. This huge increase took place in an environment that saw women entering musical occupations with equally impressive gains, as Judith Tick and others have documented. On the upward slope, there are a couple of years with notable jumps in production (which I discuss in my article). Then came the decline (perhaps “collapse” is a better word). 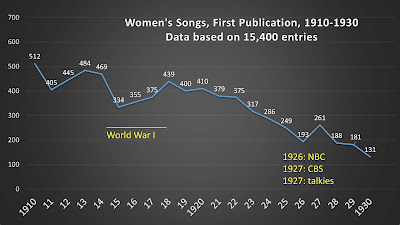 World War I had an immediate impact, with 469 new songs in 1914 dropping to 334 in 1915. The fall-off in the 1920s stems from the replacement of the piano by other technologies: the phonograph and radio became the source of family music making, and the invention and spread of “talkies” soon followed.

Based on an update of the data in June (an update that is already a little out of date), the curves are not so much changed as they are strengthened, exaggerated. 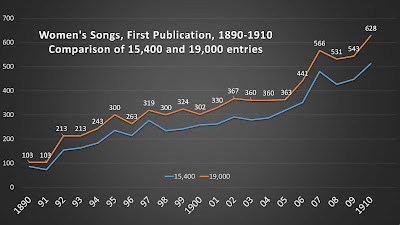 Women published 103 new songs in 1890 and 1891 and then ascended even more dramatically to 628 in 1910. Similarly, the additional data show the decline in the 1920s as still more pronounced. 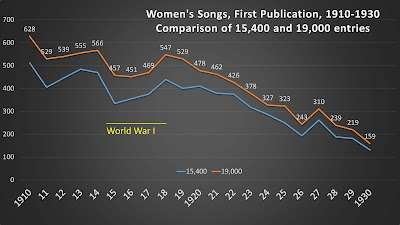 This forty-year arc in song publication certainly exists for males as well, because the societal factors that affected women also affected male songwriters. But the numbers for male composers are so vast that they are for the moment unchartable. The same decline is evident in music publishers going out of business in these years and in plummeting sales of pianos.

The data added in the last two years slightly alter the ranking of the most prolific women composers. With thousands more entries in the database, there are several changes in the pecking order. 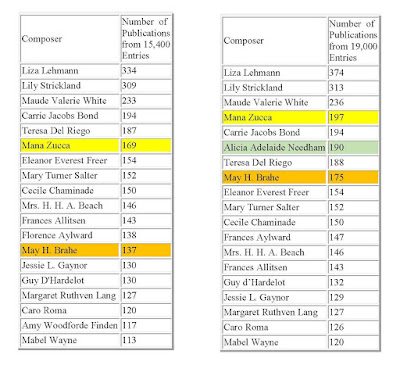 In a few cases, such as for the British composer Liza Lehmann at the top of the list, many more songs are accounted for. Alicia Needham, an Irish composer jumped the furthest, from the low 100s to sixth. And the Australian May Brahe also climbed several notches. There are similar shifts in the ranking of the most popular poets, though the phenomenally successful (and completely unstudied) British writer of lyrics known until 1914 as Edward Teschemacher and after as Edward Lockton is still far and away the most popular.

The ongoing nature of this database is one of its distinguishing features, one that separates it from any other project I have undertaken. My project may not be sizeable enough to qualify as big data, but in comparison to the scale of previous bibliographies of women composers, it is much larger and capable of being manipulated, searched, and supplemented. Although my data are about women, the research such a database makes possible applies as well to men; that is to say, events such as the rise and fall of song publishing, the preference for certain poets and poetic styles before World War I and others after, the relative popularity of art songs, middle-brow songs, and theatrical songs, and even the cultural significance of people who wrote just one or two songs – these are societal issues. One question that interests me a great deal remains unanswerable: in these decades in which women composers and their songs flourished so dramatically, what was their share of the market? What percentage of all songs published in these years was composed by women? And do those percentages differ for art songs as opposed to middle-brow songs or those issued by Tin Pan Alley publishers? The creation of a similar database for songs by men – a task that would surely require a group effort – would answer this question.