NOTE: The third annual President’s Endowed Plenary Lecture at the Annual Meeting of the American Musicological Society will be delivered at 5:30 p.m. on Thursday, 12 November 2015, in Lexington, Kentucy, at the Galt House Hotel (140 North Fourth Street). The public is invited.

This talk troubles the bright line separating creative work from academic research, through an examination of four cases from my own work as a composer and interactive artist. The works themselves are diverse in content and affect, and range from computer music performance and interactive installations to opera. Each of these works, however, was developed through a combination of ethnographic method, historical and archival work, analysis of musical practice, and critical examination. The results are serving in turn as the impetus for my musicological writing—on the works themselves, on histories of larger networks of musical practice that these works draw upon, and on still larger socio-technological networks and practices that all of us encounter every day.

Thus, the talk affirms the fact that the world continues to draw critically important lessons from music—often cryptically, and despite an ongoing and deleterious trope that portrays music as peripheral to American intellectual life. In staunch opposition to this trope, musicologist Jann Pasler has proposed that “music can serve as a critical tool, activating and developing multiple layers of awareness. . . . I invite the reader to listen for music’s resonance in the world and, through music, to help us imagine our future.” My talk makes common cause with Professor Pasler’s view, echoing philosopher Pierre Hadot’s understanding that “in philosophy, we are not dealing with the mere creation of a work of art: the goal is rather to transform ourselves.” 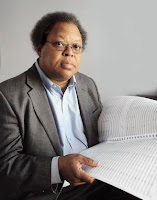 George E. Lewis is Edwin H. Case Professor of American Music at Columbia University. A fellow of the American Academy of Arts and Sciences, Lewis has received a MacArthur Fellowship (2002), a Guggenheim Fellowship (2015), a United States Artists Walker Fellowship (2011), an Alpert Award in the Arts (1999), and fellowships from the National Endowment for the Arts. Lewis has been a member of the Association for the Advancement of Creative Musicians (AACM) since 1971, and his widely acclaimed 2008 book, A Power Stronger Than Itself: The AACM and American Experimental Music (University of Chicago Press) received the American Book Award and the American Musicological Society’s first Music in American Culture Award. His oral history is archived in Yale University’s collection of “Major Figures in American Music.”

In 2015 Lewis was presented the degree of Doctor of Music honoris causa by the University of Edinburgh.