Choreographies of Listening: Some Thoughts from Doing Jazz History while Having a Body

Like many jazz scholars, I spend a lot of time engaging in critical historiography, contemplating the effects of the sedimental layers of ideology that have accumulated over time, and how those striations affect our view of the past. But there’s one moment in my life that sticks out where I felt the gravity of jazz historical narratives. When I say gravity, I mean precisely that: it pulled me off my feet and planted my ass in a chair.


At the 2013 AMS meeting in Pittsburgh, a live band performed Ted Buehrer’s painstaking transcriptions of Mary Lou Williams’s arrangements and compositions. My friend Anna and I lindy hopped our way through Williams’s best charts from the 1920s and 30s “Walkin’ and Swingin’”, “Messa Stomp,” and “Mary’s Idea.”[1] About halfway through, the band took up “Scorpio” from Williams’s Zodiac Suite, and I felt that groovy bassline throughout my legs and hips as delightful pockets of rhythmic dissonance invited me (and I presume also Anna, though I haven’t asked her) to keep dancing…but we didn’t. The music still felt “danceable,” but we’d crossed from 1938 to 1944, and I felt a shift inside myself as I questioned whether letting my hips respond to that bassline would still be appropriate as the band crossed the “bebop moment”—that early ’40s boundary separating jazz-as-pop from jazz-as-art. I’ve often thought about my embodied experience at this concert as I’ve been researching my current book project: a study of jazz music’s shifting relationship with popular dance throughout its history. It’s helped me formulate my central research questions and, most importantly, the idea of “choreographies of listening.”

Not long after this experience, I found advertisements from the late 1930s in the Atlanta Daily World—Atlanta’s main black newspaper—promoting dance parties that also featured a separate “concert hour” when no dancing was allowed. The first such concert, featuring Cab Calloway’s band, made clear that from 9-10pm there would be “NO DANCING, in order that you may hear Cab at ease” with assurances that “at ten o’clock sharp, he will get ‘hotcha’ and ‘jam it’ until 1:30 in the morning.” 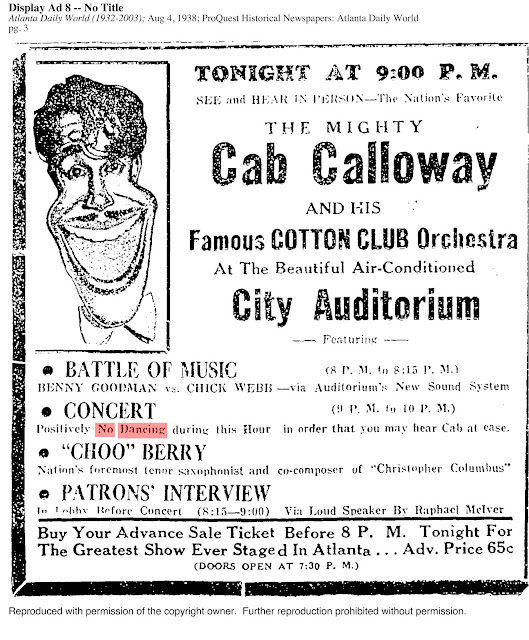 These hybridized concert events, which explicitly prescribe how audiences should position their bodies for listening, led me to analyze listening practices through the lens of choreography. My use of the term choreography follows dance scholar Susan Foster, who employs it to consider the structuring of possibilities for how bodies can move and behave within a given space. Whether planned intentionally or formed organically through social processes, choreography, she argues, is in its broadest sense a “hypothetical setting forth of what the body is and what it can be based on the decisions made in rehearsal and in performance about its identity” and “the product of choices, inherited, invented, or selected, about what kinds of bodies and subjects are being constructed and what kinds of arguments about these bodies and subjects are being put forth.”[2]

Indeed, context- and genre-specific movement scores are pretty easy to see once we treat listeners as people with bodies:

—At a symphony performance, you take your seat and remain relatively still and silent. You DO clap at the beginning and at the end of a piece, but you DON’T clap between movements. There are some choices: if other people are rising for a standing ovation, do you rise too?

—At a jazz club, you can and should feel the rhythm, but you should probably only reflect this by nodding your head and/or tapping one foot (also you should clap after solos…you don’t have to…but yeah, you kind of have to.)

While this notion might seem cynical or restrictive, I’ve grown increasingly confident that examining choreographies of listening actually offers listeners more agency. Treating listening as an active, performative practice resists the notion that musical sounds themselves inevitably demand they be listened to in particular ways, a concept that Ingrid Monson explores beautifully in her work on “perceptual agency.”[3] Lest we replace one determinism with another, within choreographies there’s always a range of available motion, and one can quietly subvert or disregard choreography altogether in the moment of performance. Indeed, later in that Mary Lou Williams concert, I chose to let her later works move me as I got up and danced, listening to them the way I listen best.

Now, I’m far from the first person whose hips and feet have crossed the “bebop moment” chasm. Through my research, I’ve found that many younger African Americans danced socially to bebop and other “post-danceable” jazz styles throughout the 1940s and 1950s and some still do so today. Through archival and oral history research as well as applied practice, I’ve explored popular dances like the bop lindy and the applejack that people danced to the music of Charlie Parker, Dizzie Gillespie, and others in bebop’s pantheon in clubs, ballrooms, house parties, and on the street (apparently, someone forgot to tell these folks that bop wasn’t “danceable.”)

Circling back to 1930s Atlanta, I’m intrigued by how these temporally partitioned concert/dance events model a heterogeneity of listening practices, offering that no one mode of listening need dominate others. In fact, I hope the concept of choreographies of listening offers us both a valuable musicological analytic and a paradigm for listening diversely—a valuable practice for any scholar or student of music. I find I do my best work when I remain aware that none of my modes of listening are “normal.” Each is informed by a choreography imbricated in historically, culturally, and institutionally specific discourses of value and aesthetics and each helps me hear music differently. We all operate within multiple choreographies of listening and we enact appropriate—or at least acceptable—listening practices when we go to the symphony, rock out at a concert, tap our foot in a jazz club, take a music theory exam, or conduct an ensemble. Each mode of listening, guided by its choreography, offers us a different type of focus. While there are many social, political, intellectual, and experiential reasons—pleasure and genuine fulfillment certainly among them—to stay within a given listening context’s movement score, sometimes, self-consciously cross-pollinating them can reveal exciting new things about the musics with which we engage. By studying listening practices and their choreographies in other times and places, we also reveal the fascinating particularities of how we listen and why.

Christopher J. Wells is Assistant Professor of Musicology at Arizona State University’s Herberger Institute School of Music and Managing Editor of the Journal of Jazz Studies. He received his PhD in 2014 from the University of North Carolina at Chapel Hill where his dissertation on drummer/bandleader Chick Webb and swing music in Harlem during the Great Depression received the Glen Haydon Award for an Outstanding Dissertation in Musicology and the Edgar A. Toppin Award for Outstanding Research in African American Music. A social jazz dancer for over a decade, Dr. Wells is currently writing a book about the history of jazz music’s ever-shifting relationship with popular dance and has a chapter forthcoming in the Oxford Handbook of Dance and Ethnicity.