Politics Invades the Theater? It's Always Been There

[Ed Note.  A version of the following Op-Ed originally appeared in the Salt Lake City Tribune on December 3, 2016.  It is presented here for the readers of Musicology Now with permission of the author.] 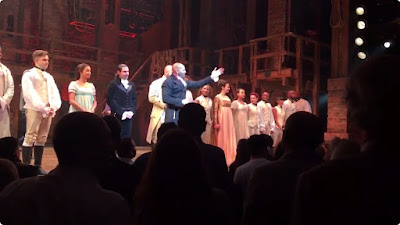 
When the cast of Hamilton delivered a message to VicePresident-elect Mike Pence after their performance on November 18, 2016 the Internet went wild. Tweet-happy President-elect Donald Trump jumped in with his indignation early the following morning, posting, “The Theater must always be a safe and special place. The cast of Hamilton was very rude last night to a very good man, Mike Pence. Apologize!”
Set aside for a moment the irony of President-elect Trump basically calling for a safe space. Because while theater is special, it has never, even in the realm of musical theater, been devoid of politics or controversy. To give just a few examples: In the 1930s, President Franklin Delano Roosevelt attended Kurt Weill and Maxwell Anderson’s Knickerbocker Holiday, a show that poked fun at him and satirized the New Deal. According to a report the next day in the New York Times, he “laughed heartily” at the production. In the 1940s, Richard Rodgers and Oscar Hammerstein II ignored advice to cut South Pacific’s anti-racist song “You’ve Got to Be Carefully Taught,” insisting that its message was the core reason for the show. In 1970, long before the cast of Hamilton performed at the Obama White House, the cast of the musical 1776 performed at the Nixon White House. The cast and production team felt decidedly mixed about being associated with conservatism, and they took out a full-page ad in the New York Times advocating the end of the Vietnam War. And today, should Trump attend the off-Broadway production Avenue Q, he can hear the puppet characters sing that “Donald Trump is only for now,” a line that initially referred to George Bush when the show opened in 2003.
Hamilton itself has become a kind of political lodestone in highly partisan times while dramatizing the equally contentious politics of our early republic using hip hop and a multiracial cast. Contemporary politics aren’t ignored; in one of the show’s most cheered lines, Alexander Hamilton and the Marquis de Lafayette are described as “immigrants” who “get the job done.” Nonetheless, the musical has won acclaim across party lines, from the Cheneys to the Obamas. A bipartisan group of Utah politicians joined forces to make a “Carpool Karaoke” Hamiltonvideo, and the recent documentary about the musical, Hamilton’s America, featured President Obama, former President George W. Bush, House Speaker Paul Ryan, and Senator Elizabeth Warren. It’s hard to imagine this group being able to agree on anything, perhaps least of all a work of art about political history. This is one of Hamilton’s most remarkable accomplishments.
To my knowledge (and I queried a slew of fellow musical theater scholars as well), this is the first Broadway musical cast to directly address a politician, while out of character, from the stage. It was an extraordinary move in an extraordinary time, when an almost all-minority cast performed for the Vice President of a President-elect who has made offensive, often untruthful comments about immigrants, Latino Americans, Muslims, and women. Pence himself has opposed same-sex marriage and has advocated for anti-LGBT legislation, and it did not go overlooked by the press that Hamilton’s current leading man Javier Muñoz is openly gay and HIV-positive.
After all, Hamilton uses a minority cast to tell a history of white “founding fathers” using the predominantly white art form of musical theater not by chance but to claim their belonging, to say that U.S. history and Broadway musicals are their heritage too. This message is not a break from the history of musical theater. Musicals have long addressed the contested grounds of “Americanness,” pushing audiences to engage with controversial political issues – and even politicians themselves – outside of their “safe” zone.

Elizabeth T. Craft is an assistant professor of music at the University of Utah. Her article on the marketing of Lin-Manuel Miranda’s first Broadway musical In the Heights appears in Studies in Musical Theatre, and she will present as part of a panel dedicated to Hamilton at the Society for American Music conference in March. Her current book project, which has been supported by a Society for American Music Virgil Thomson Fellowship and the University of Texas at Austin’s Harry Ransom Center, examines the early twentieth-century musicals and cultural impact of George M. Cohan. She thanks Dr. Naomi Graber and Dr. Elissa Harbert for their comments during the preparation of this piece.