Book Preview: Lions of the North by Benjamin Teitelbaum 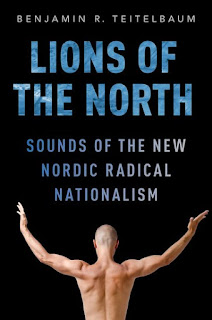 My book Lions of the North explores the ways music participated in the mainstreaming of radical nationalism (also referred to as "right-wing extremism," "far right populism," etc.) in the Nordic countries. These political movements were dominated by music making during the 1980s and 1990s as anti-immigrant activists in western Europe coalesced around skinhead subculture and white power music. My ethnographic study traces reformist nationalists' search for musical alternatives to their skinhead past and the rise of rap, reggae, light pop, and folk music in contemporary activism, as well as a growing disinclination toward investing in music of any kind.

I faced many challenges while researching and writing this book, among them the ethical dilemmas brought about by conducting long-term ethnographic fieldwork among the people I study. Additionally, when you publish scholarship on current social phenomena, tomorrow's news can gut the relevance of your claims. Most of my book was written and researched between 2010-2012, and a lot has changed in western politics since then. However, I have come to think that my epilogue--written in 2015--has aged quite well. In it I reflect on a shift in music and attitude I had observed among nationalists after my main period of ethnographic fieldwork had ended. In particular, I noticed that nationalists' attempts to distance themselves from their skinhead stereotype were stalling, and speculated that this might have something to do with broader political transformations in the Nordic region and beyond. As I wrote in my book:

The whisper of skinhead song resounds amid New Nationalism’s silence. While 1990s nationalist favorites retain their popularity today, the same cannot be said of the alternative music projects emerging in the post- skinhead era that I have studied in this book. Campaigns to create a new sound for the scene— efforts to rebrand nationalism through rap, reggae, folk music, and “freedom pop”— have stalled. Circumstances prevent nationalism’s musical innovators from carrying on their work, but I see little demand in the scene for replacement Zyklon Booms or Sagas. Nationalism’s moment of reform via music may be passing.

I suspect that just as the arrival of alternative styles proclaimed a new era for Nordic nationalism, so too does their speedy disappearance. A growing attitude in the scene may be starving reformist music of necessary fuel. I encountered this attitude in virtually everyone I spoke to on my return visits. They were eager to talk about the booming readership of their newspapers and online magazines, as well as increased sales for their publishing houses. They noted that many nationalist online personalities were deanonymizing themselves by writing under their real names. They relished election results in the region that placed anti- immigrant parties in Denmark, Norway, and Finland in positions of power, and they knew that the Sweden Democrats— despite nonstop scandals and relentless public condemnation— would increase their standing during the 2014 election and begin vying to become the largest party in the country. They celebrated political developments in Hungary and France, where robust, dynamic, radical nationalisms succeeded in penetrating the mainstream. They even spoke about the rise of figures like Vladimir Putin and Donald Trump, and the prospects for a new anti- liberal order in the west.

The nationalist scene, in other words, bruned thick with an optimism I’d never seen before. Its once intense backward glance is shifting forward as its members stand before a future for the Nordic region and for Europe they believe is theirs for the taking. Whether their confidence is justified I cannot say, but musical projects devoted to grappling with the scene’s past seem passé. Their focus today lies on an anticipated liberation from the underground, a freedom to ignore rather than deny their stereotypes, and an escape from the need to apologize. Will new songs emerge to articulate this attitude? Perhaps. My thoughts go to the Sweden Democrats’ official election anthem. Void of sorrow and indignation, full of pomp and swagger, the nationalists sing:

Nothing is stronger than an idea when its time has come.
Nobody is stronger than we are at the daybreak.
Nobody can push down our love— we have it in our sights.
Our heart, beating proud,
Come hear our merry song!
(pg 173-174).

Benjamin R. Teitelbaum earned his Ph.D. in ethnomusicology from Brown University in 2013. He is Assistant Professor of Ethnomusicology and former Head of Nordic Studies at the University of Colorado, Boulder, and has been affiliate faculty in Music and International Affairs since 2012. His research focuses on western ultraconservatism, music in the Nordic countries, and music and politics.