By Ted Gordon
Don Buchla (1937-2016) was an instrument designer, musician, and engineer who developed his first musical instruments at the San Francisco Tape Music Center in the mid-1960s. He was also an active engineer in the Bay Area, working on various projects for the Lawrence Radiation Laboratory (“Rad Lab”), NASA, and the California School for the Blind. Buchla’s designs, whether measuring the brainwave activity of space-bound chimpanzees, giving spatial sonic feedback to people with disabilities, or providing musicians with centralized and standardized control interfaces for electronic music, all had one thing in common: they sought new ways to expand the body’s capacities for control, creativity, and play. 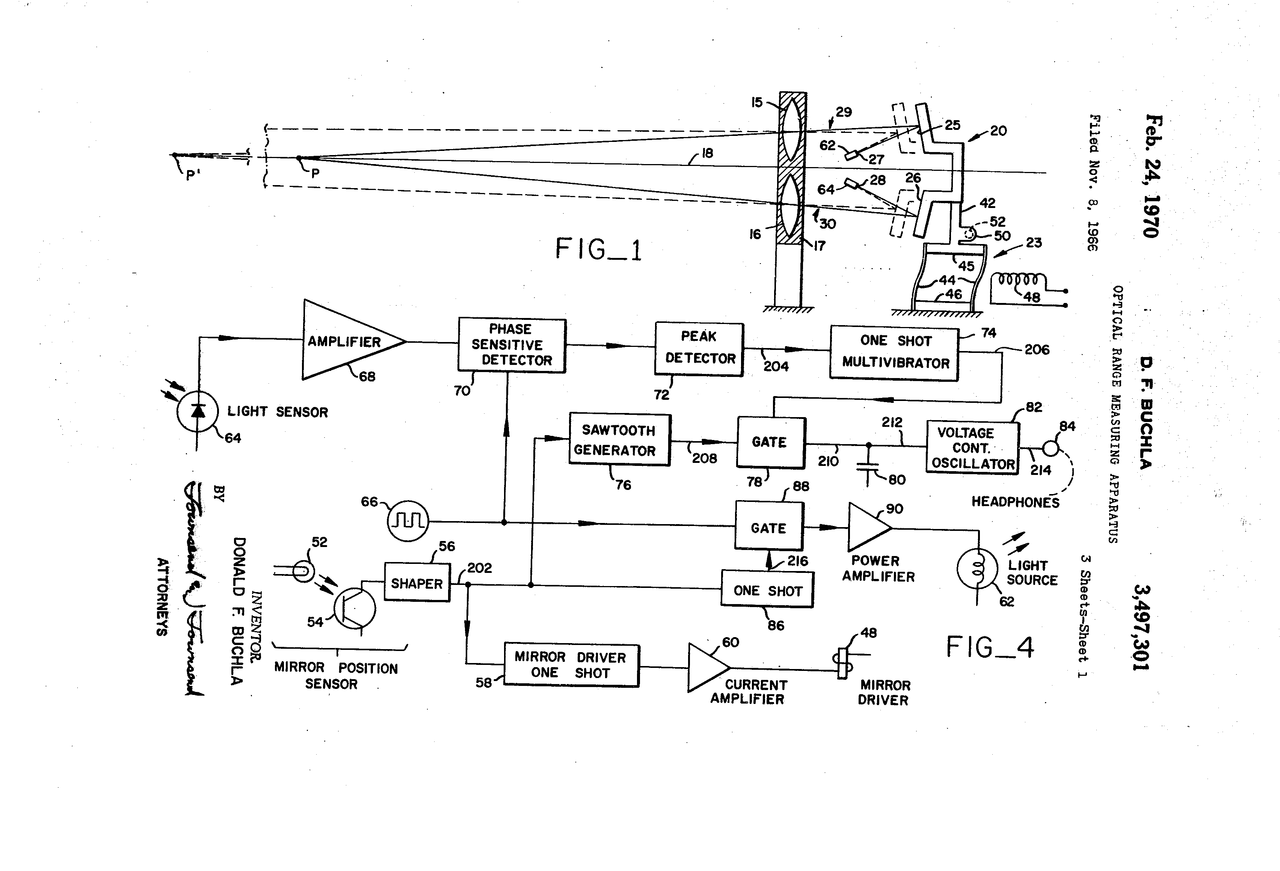 [Buchla, Donald F. 1970. “Optical range measuring apparatus.” US3497301 A, filed November 8, 1966, and issued February 24, 1970.]
Buchla graduated with a BA in physics from Berkeley in 1959, and was quickly put to work by NASA on projects for what he called “biometric telemetry”[1]: measuring the biological processes of animals and turning those measurements into usable electronic signals that could be communicated across different instruments. He was also involved in the Bay Area’s burgeoning arts community and actively experimented with musique concrète. It was these musical experiments that led him to take the bus across the Bay Bridge to the San Francisco Tape Music Center (SFTMC), which had recently settled into 321 Divisadero St, an old labor hall it shared with (radio station) KPFA and Ann Halprin’s Dancers’ Workshop.
What Buchla didn’t know was that at the SFTMC, composers Morton Subotnick and Ramon Sender were searching for a new engineer to make what Subotnick has described as a “composer’s blackbox.”[2] This “blackbox” would be a single instrument that could standardize, miniaturize, and streamline the command and control of the TMC’s motley assortment of technological devices, culled from the worlds of military surplus, radio, and what engineer William Maginnis remembers as the “UC Berkeley Department of Physics and Cosmic Rays.”[3] After reading Helmholtz’ 1863 “On the Sensations of Tone” and the Navy Manuals of Electricity and Electronics, Subotnick and Sender had come up with a primitive design that used a punched paper disc and a photoresistor to “program” the control of various instruments. Buchla quickly countered that he had a better idea: create a modular, expandable instrument that could standardize, replicate, and control all of the various functions of the electronic studio. And with a $500 line item from the SFTMC’s Rockefeller Foundation Grant for “expansion of the studio console”[4], Buchla built and delivered his “Modular Electronic Music System” to the Tape Music Center. 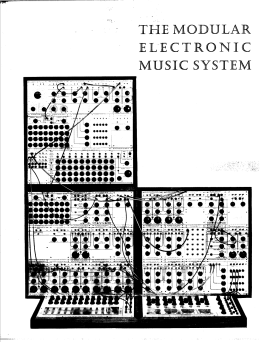 The “Buchla Box”, as it was known around the studio, differed radically from most other contemporaneous electronic musical instruments. Many have commented that it was one of the first “voltage-controlled” instruments in America, but voltage control technology was not, in fact, new; Harold Bode had described its use for electronic musical instruments in 1961[5], and voltage control was a standard design feature in many other applications of electronics. Similarly, by 1964 there were several other “all-in-one” systems like Peter Ketoff’s “Syn-Ket” and Moog’s Modular Synthesizer. But Buchla’s Box was different not in degree from these earlier systems, but rather in kind, because it was not an instrument intended to “synthesize” sounds. Rather, like Buchla’s designs for NASA or for the blind, his Modular Electronic Music System was instead an instrument designed to plug its human users into a cybernetic circuit of expanded control: not only of sound-generating oscillators, but also tape transports, signal routing, reverb tanks, and even lights. The Buchla Box was built, module by module, not only to address the demands of its users at the SFTMC, but also to realize Buchla’s own innovative ideas of what could be possible by expanding the reach of the human mind and body with electronics. 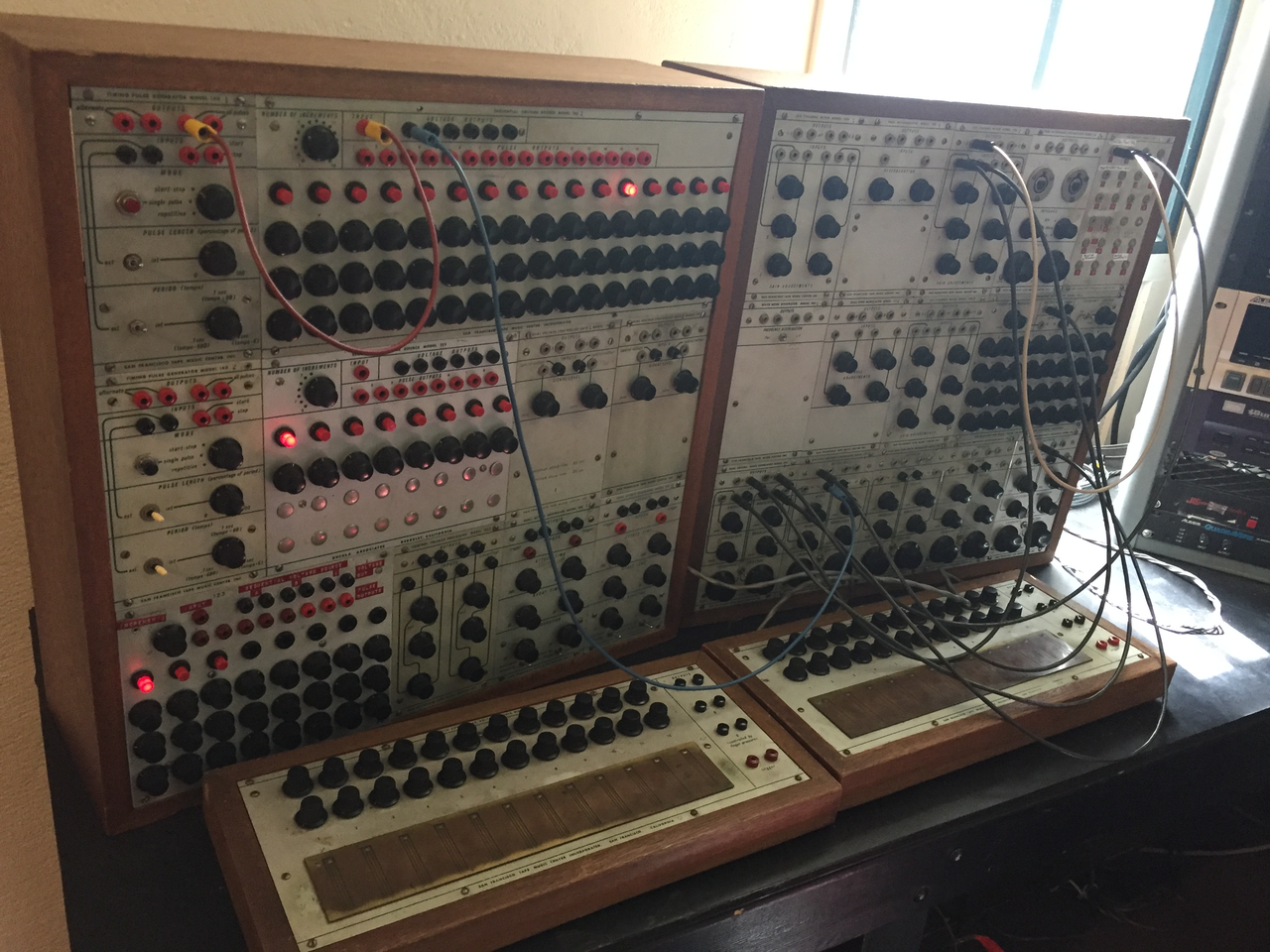 [The first Buchla Modular Electronic Music System, still operational at Mills College. Maggi Payne. Photo by the author, August 2016. Thanks to Maggi Payne.]
Examining Buchla’s original modules gives some insight into his unique take on electronic music, and the contingencies that produced the peculiarities of each module. A musician might look at Buchla’s Box and apprehend a familiar design: a large cabinet with dials, switches, and blinking lights, attached by wires to a separate box that appears to be a “keyboard”. Yet this “keyboard”—or as Buchla named it, the “Model 114 Touch Controlled Voltage Source”—had ten identical touch-capacitive keypads, evenly spaced in a horizontal line. When touched by human skin, each keypad produced an individual timing pulse signal, a variable control voltage signal, a “pressure”-based signal, and a variable “decay” time. This module was expressly built because Sender and Subotnick had acquired a tape-based answering machine device with ten separate tape transports from an unscrupulous insurance agent in a warehouse fire—but they had no practical way to use it[6]. Buchla solved this problem: each key of the TCVS could control each tape transport’s start/stop, playback speed, amplitude, and one other variable to be determined by the user. The fact that many humans have ten fingers to match its ten keys was an added bonus.
It was this constant dance between contingencies, affordances, and innovation that helped Buchla develop instruments for new ways of improvising, composing, and performing music as an “intermedia” art. Though his systems were purchased and installed in many academic institutions, Buchla’s designs travelled much farther afield from the world of composer music. They provided spatial panning control for David Tudor’s sound installations in the mid-1960s, powered a signal mixing system for dozens of telephone headsets and loudspeakers on Ken Kesey’s further bus, and formed part of the PA systems for the the 1966 Trips Festival and for Owlsley “Bear” Stanley of the Grateful Dead. Buchla’s Modular Electronic Music System was a flexible instrument for controlling and playing with sound as signal, routed and modified in a complex, non-linear circuit between human and instrument. 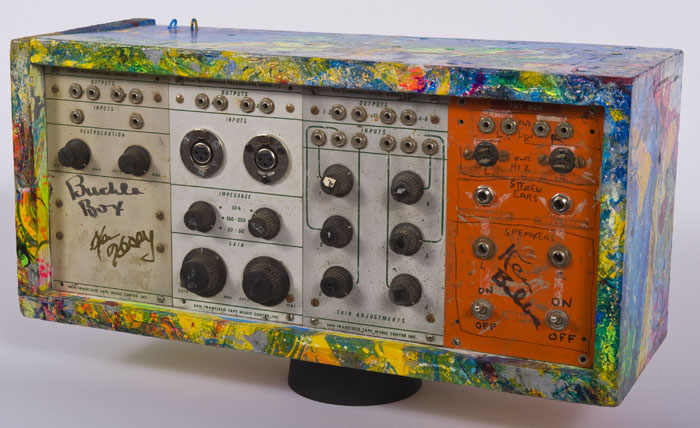 [Ken Kesey’s “Buchla Box”, c/o National Music Centre. Note that this system contains no sound-generating modules, but rather consists of a reverb unit, a microphone pre-amp, a mixer, and a speaker routing system]


These same systems gave composers like Pauline Oliveros unprecedented control over her own complex systems, helping her to develop and control her “Expanded Instrument System” at Mills College in 1967. As Donna Haraway has argued, “taking responsibility for the social relations of science and technology means […] embracing the skillful task of reconstructing the boundaries of daily life, in partial connection with others, in communication with all of our parts.”[7] Buchla’s instrumental systems confront their users with new possibilities for hands, eyes, ears, and mind, promoting a lasting ethos of experimentation that—like Buchla’s modules—is surprising, expandable, and serendipitous. 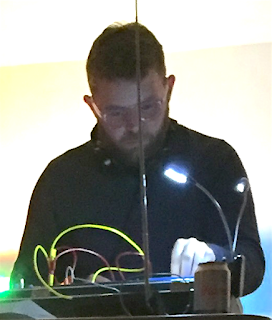 Ted Gordon is a PhD Candidate in the History and Theory of Music at the University of Chicago. His dissertation, titled “Bay Area Experimentalism: Music & Technology in the Long 1960s”, follows musicians through the worlds of experimental and institutional music, systems theory, and spirituality. He is an active improvising musician in the Chicago area.