The Art World's Day Off

The New York Avant Garde Festival (1963-1980) was never a critical darling – not in the mid-1960s when it was obviously a music festival featuring composers and musicians, and not in its fifteenth and final iteration when it boasted mixed media performances by 650 artists over twelve hours. In its early years, it attracted some of the finest vitriol ever to be printed on the subject of contemporary arts festivals, while in later years, reporters tended towards descriptive vignettes overlaid with a heavy hint of “curiouser and curiouser.” In the early 1970s, slightly over halfway into its 15-season tenure, the criticism took a particular turn: the New York Avant Garde Festival, critics informed readers, was not avant-garde at all.

In 1972, the free-and-open-to-the-public Ninth Festival was held aboard a retired steamboat berthed at the South Street Seaport Museum. According to press releases, it featured more than 200 international artists and musicians and attracted an audience of 14,000. There was experimental jazz, sculpture, video art, conceptual work, and audience participation. David Nunemaker recreated 1920s life on the ship within the confines of the purser’s office; Franklin Morris took over the engine room with synthesizers; Alison Knowles performed “Identical Lunch;" Liz Phillips tuned electric spaghetti; Charlotte Moorman played her cello inside a tank of water pumped from the Hudson and East Rivers. Eight years later, the Fifteenth Festival took place on July 20, 1980, from noon to midnight at the New York Passenger Ship Terminal. Among the many performances were “minimal novels” written inside fortune cookies; music composed by David Tudor; one piece involving a pig on a treadmill and another using electronic sensors to cue drums; Pauline Oliveros’ “Cheap Commissions”; public readings of both poetry and palms; and “The Great North River Fish Tournement [sic]” conducted by Ben Patterson.

Both the Ninth and the Fifteenth Festivals are examples of what was by then a perfected format begun when organizer Charlotte Moorman chose to leave the concert hall and hold the Fourth Festival in the middle of Central Park. Every year following, the Festival was a little more ambitious in its location, its recruitment, and its goals for attendance. But the basic structure – an enormous mixed-, multi-, and intermedia festival with lax participation requirements and easy public access – remained the same from the Fifth through the Fifteenth Festival. Each was a spectacle, each was uncategorizable; at the same time, each was a continuation of precedent, an established event that bordered on institution (made all the more obvious by the institutions involved in its realization: the NEA, AT&T, and Con Edison, to name a few).

This may be one reason why, when art critic Robert Hughes wrote a piece titled “The Decline and Fall of the Avant-Garde” for Time in 1972, he specifically called out the Ninth Festival as “a fair example of the problem.” This Festival, he says, was “a confusion of irresolute trivia, …so affably amateurish, like a transistorized rummage sale, that one gave up expectation.” And Hughes (who generally took a conservative view of art) wasn’t the only one looking askance at the long-running event. By the Tenth Festival, reporters were no longer touting it as something new or even particularly shocking; instead, headlines like “When Festival is 10, Is it Avant-Garde?” and “Avant Garde on Its Derriere” took over the popular press.

Clearly, by the 1970s, critics had a crystallized conception of what constituted an avant-garde (a worthwhile blog topic in itself) and the New York Avant Garde Festival not only wasn’t it, but was actively participating in the death of whatever it was. The Festival was neither innovative nor serious, reviewers alleged; it was incoherent and played-out. There may have been other reasons for the critics’ ire as well. For one thing, the long 1960s was giving way to a new era with a new context for art; for another, the vanguard of an art form can only be vanguard for so long; and finally, there’s the fear of institutionalization as the death knell of avant-garde practice. Whatever the case, the “avant-garde” label had become a liability to the Festival’s success as measured by the critics and, presumably, their readers.

There were real consequences for the New York Avant Garde Festival stemming from the idea that it was not as avant-garde as it professed. The history of its last years is a story of declining media interest: the media never loved these Festivals, but the Fifth Festival had 17-plus previews, reviews, and photographs in major newspapers, whereas to date I’ve found references to only four reviews of the Fifteenth Festival (two in international periodicals). Scholarly attention has followed suit; there’s excellent material on the first few Festivals, but studies about the later iterations are virtually nonexistent. If the critics had the last word, we might conclude that the final years of the New York Avant Garde Festival were not avant-garde, therefore not worthy of in-the-moment or after-the-fact study, and so they were, ultimately, a failure.

But are there other criteria by which we could judge those last five or six Festivals? For one thing, Moorman repeatedly insisted that the label “avant-garde” was only to warn her Bach- and Beethoven-loving audiences that something different was in play. For another, the first page of results from a quick Google search for “death of the avant-garde” includes articles and books from 1993, 2005, 2014; we’re always certain our avant-garde is dying. Why should the 1970s have been any different?

Not long after the publication of Hughes’ essay in Time, video and conceptual artist Les Levine — a longtime Festival participant — took it upon himself to respond. “The Avant Garde Festival has never been anything more than an art aside,” he begins. “To be surprised...that it amounts to ‘irresolute trivia,’ is almost the same as being surprised that Time is a magazine and not a clock.” Not, perhaps, the most full-throated defense, but he goes on: “Many gave up expectation years ago and merely considered this event as the art world’s day off….” Still not high praise, but there’s something compelling (charming, even) about that idea: The Art World’s Day Off.

By 1980, the Festival was established, and maybe that did make it less than avant-garde. On the other hand, that establishment made it a perfect place for artists and old friends to meet once a year, to experiment with virtually no risk, and to reach new audiences. The New York Avant Garde Festival is nothing if not proof of a thriving, successful community of musicians, artists, patrons, audience members, and even critics. And so when Ari Goldman, reporter for the New York Times, spoke to Charlotte Moorman about the fortune cookies and the drums and the pig on a treadmill at the Fifteenth Festival, she was able to say with pride: “There’s nothing unusual – it’s all very normal.” That statement just might encapsulate both the problem and offer the key to the Festival’s success. 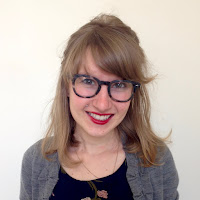 Caitlin Schmid is a Ph.D. candidate at Harvard University with research interests that include musical avant-gardes, American music, sound art, gender studies, and radical pedagogies. She is currently writing a dissertation that explores festivals of experimental music in 1960s America. 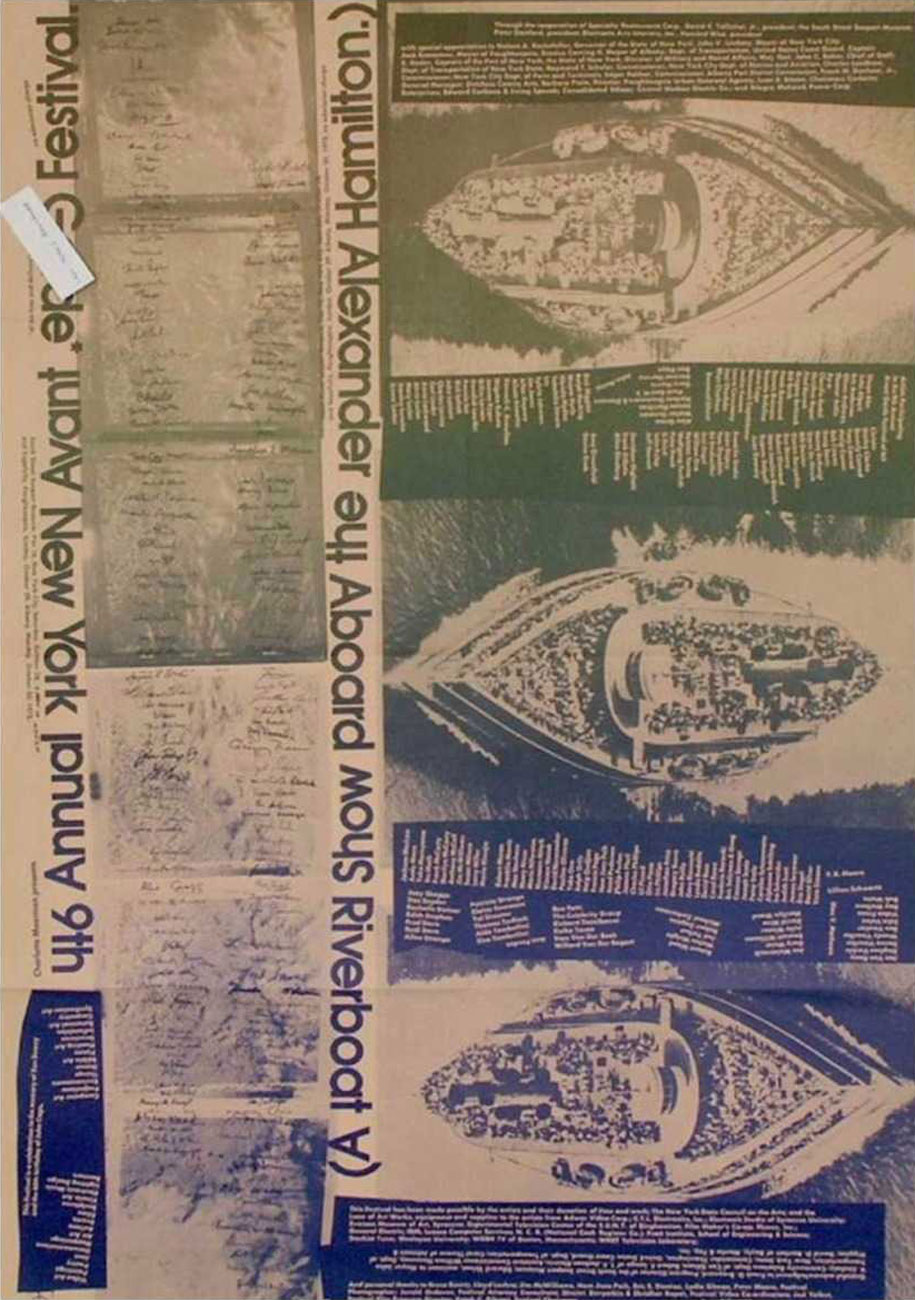 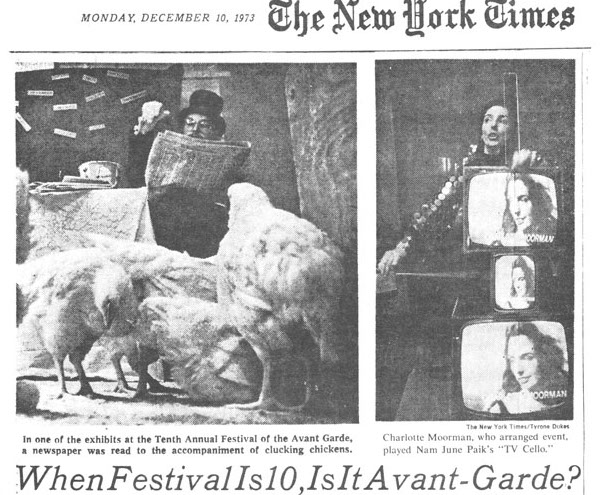